Around 1,000 people were evacuated from the Katulpur and Onda blocks of Bankura after water levels of Dwarakeshwar river touched the danger level 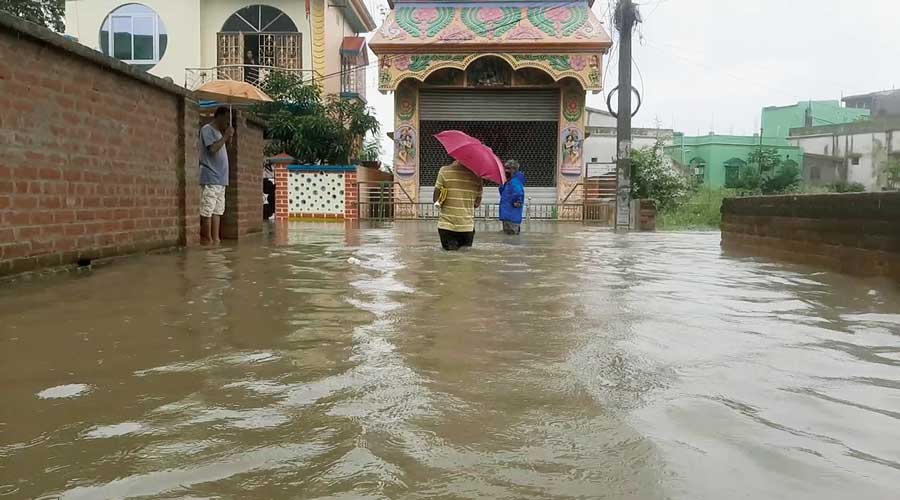 Chief minister Mamata Banerjee on Thursday asked people living in coastal areas and at other places across Bengal, including Calcutta, to stay safe following a forecast of heavy rainfall over the next few days and rise in the water levels of seasonal rivers.

“Calcutta and districts faced heavy rainfall of around 179mm last night. We never witnessed such a heavy rainfall in the past (in a day). There is no way to release the water… The next high tide is likely to occur on June 26, which will result in an increase in the water levels of rivers in Hooghly and Howrah districts,” Mamata said at state secretariat Nabanna.

“On the other hand, heavy rain has been reported in Jharkhand and Bihar. We face inundation if heavy rain occurs in Jharkhand as water is released from several dams. We can’t control nature, so we have to face it,” she added.

The chief minister also sounded an alert and asked people residing in the low-lying areas of Hooghly’s Arambagh and Khanakul and Howrah’s Uluberia to stay safe. These areas face flood-like situations every year as seasonal rivers overflow during the monsoon.

Several districts in south Bengal continued to be lashed by incessant rain on Thursday and the Met office in Calcutta forecast heavy to very heavy rainfall in the next three days.

Sources in the Met office said Calcutta had received 144mm of rainfall, while South 24-Parganas and Bankura districts recorded 178mm and 133mm of rainfall, respectively, in 24 hours till 6pm on Thursday. Darjeeling received 70.4mm rainfall during the same period.

According to the forecast, districts like North 24-Parganas, South 24-Parganas, Jhargram, Nadia, Purulia, Darjeeling and Kalimpong are likely to witness heavy to very heavy rainfall in the next three days and the Met office issued an alert for districts like Birbhum, West Burdwan, Bankura and Purulia.

“We have already evacuated 250 people residing on the banks of the Dwarakeshwar and Shankari rivers. The NDRF teams are ready to move to inundated areas if necessary. The teams have been deployed at places like Khanakul and Arambagh,” Hooghly district magistrate Deepap Priya P. said.

Around 1,000 people were evacuated from the Katulpur and Onda blocks of Bankura after water levels of the Dwarakeshwar river touched the danger level on Thursday evening.

While fair-weather bridges have been damaged at several places in the state, a bamboo bridge over the Damodar connecting Shaltora in Bankura and Asansol in West Burdwan was swept away on Thursday afternoon following consistent rain in the region. Hundreds of people who work at factories in Asansol had to cross the river in overcrowded country-made boats in the evening to reach Bankura.

Fair-weather bridges are causeways built over rivers or water bodies that remain dry during most part of the year other than the rainy season.

The situation is expected to worsen as several barrages in south Bengal have already started releasing water following heavy rainfall in bordering Jharkhand. The Durgapur barrage discharged around 21,400 cusec of water on Thursday and there will be further release if the water level rises.