At 5.11pm on Monday, Mamata announced his superannuation as Bengal chief secretary and his appointment as her chief adviser for three years 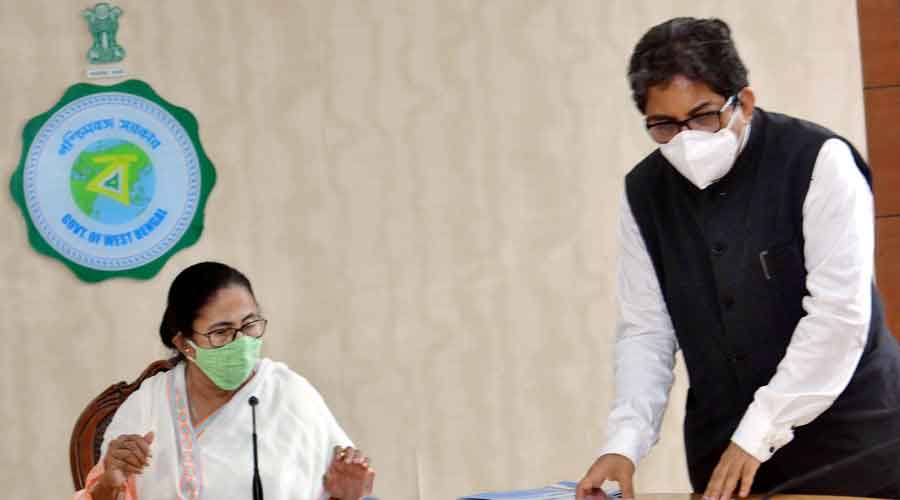 At 5.11pm on Monday, chief minister Mamata Banerjee announced Alapan Bandyopadhyay’s superannuation as Bengal chief secretary and his appointment as her chief adviser for three years.

Mamata, who had held a virtual administrative review meeting and a brief news conference on the impact of Cyclone Yaas in the afternoon, had steered clear of elaborating on the developments regarding the chief secretary after she sent a five-page letter to Prime Minister Narendra Modi in the morning.

Bandyopadhyay was present at the administrative meeting, having not gone to New Delhi to report to North Block by 10am as the Centre had asked him to.

However, after the Centre sent another letter to Bandyopadhyay ordering him to report to North Block by 10am on Tuesday, the chief minister appeared for an unscheduled news conference to make the announcement.

“Shri Bandyopadhyay has superannuated from the afternoon of May 31, 2021, on his normal date of retirement…. Hence his services are no longer available to join the central government tomorrow (Tuesday). He did not resign; he retired, superannuated,” Mamata said.

The chief minister added that state home secretary H.K. Dwivedi would succeed Bandyopadhyay as chief secretary while personnel and administrative reforms secretary B.P. Gopalika would be the new home secretary.

It was clear that the decision was prompted by the Centre’s apparent unwillingness to stand down in the latest confrontation with Mamata’s government in Bengal since the BJP’s defeat in the Assembly election.

Mamata said she could have prevented Bandyopadhyay from retiring and had him continue as planned with the three-month extension, and the Centre would not have been able to say anything.

“But I did not force him; after he said he would like to retire on schedule, today, I permitted him,” she said, repeatedly underscoring the value of Bandyopadhyay’s service and the need for it to continue for Bengal amid the pandemic and in the wake of the cyclone, the grounds over which his extension had been sought and cleared earlier this month.

“Alapan Bandyopadhyay, the bright officer… he has the guts, the boldness, the honesty, the sincerity, and his name will be forever in the history of India, about how a bureaucrat was victimised after his long service,” Mamata added.

“I allowed him to be the chief adviser to the chief minister --- he will start his work from tomorrow --- for three years, not three months…. Bengal doesn’t know defeat. It is our moral victory, we never bowed our heads.”

The Trinamul Congress chief called the Bandyopadhyay episode yet another “great blunder” by the Centre in its alleged efforts to bulldoze state governments and the federal structure of the nation.

She demanded answers on the decision, which she called illegal and unconstitutional, wondering about the quality of the political counsel being offered to Prime Minister Modi and Union home minister Amit Shah.

“There are so many Bengal cadre officers working for the Centre; if we confront like this, what will be the future of this country, Mr Prime Minister? Mr Busy Prime Minister, Mr Mann Ki Baat Prime Minister… what, do you want to finish me? Never, ever…. As long as people give me support, you cannot,” she added, accusing the Centre of adding “injury to the insult”.

Mamata repeatedly accused the Modi government of having created the conflict over Bandyopadhyay simply because the BJP does not like her and remains unable to accept or respect the historic Bengal mandate.

She lambasted efforts from the saffron ecosystem to discredit the mandate and even call for President’s rule since the results, while creating disruptions in the way of her governance amid the pandemic, even in the wake of the cyclone.

“The most senior bureaucrat of the state, the chief secretary, you just call him away like that? It has never happened before since Independence. This is a matter of shame,” she said.

“They think only BJP people are superhuman, (and that) everybody else, including the bureaucrats, will digest everything…. There must be end to tolerance now…. I had never seen such a cruel, merciless Prime Minister or Union home minister. Because they are against Mamata, they also attack the bureaucrats, not even sparing the chief secretary. This is too much,” she added.

Mamata appealed to civil society across the nation, besides all state governments led by parties from the national Opposition, NGOs, and the bureaucracy to stand together and fight, as this was not just about an Alapan Bandyopadhyay.

“This battle is for all bureaucracy…. Only the two-member (Modi and Shah) syndicate, that is the law? Even if they go to court, the court will also not give support as far as my knowledge as a lawyer goes,” she said.

“They will regret this one day. For seven years, they binged on Dilli ka laddu, that’s why they are out to destroy the federal structure,” she added. “Having failed on all fronts in running this nation, with disaster in every area, they have nothing left to do, so they are trying to impose -- not even an Emergency -- martial law.”

The chief minister said the BJP had been trying to “disturb” the state government relentlessly in her third term misusing its political power, but it was committing yet another blunder in the process.

“We don’t mind. We will fight the battle. Ours is a pro-people government, they cannot stop us from working for the people…. They have no idea about us: we were born and raised in struggle, forged in mass movements,” she said.