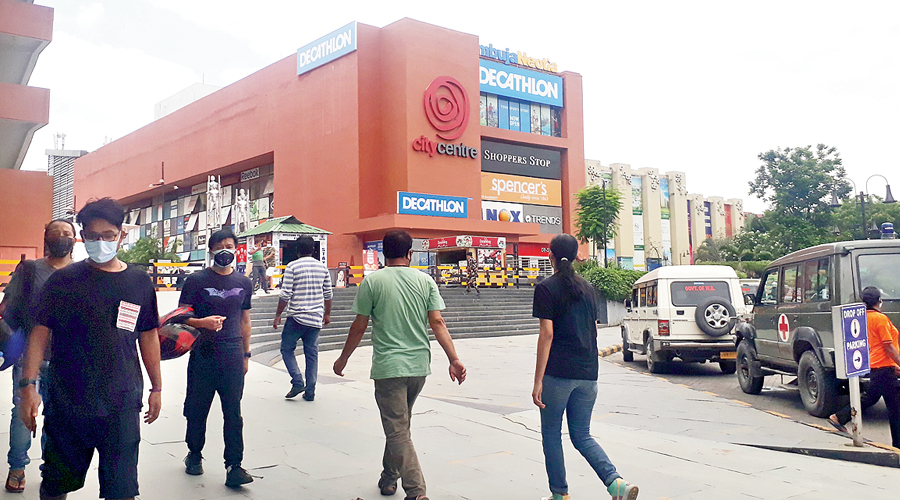 Fear of contracting Covid-19, coupled with incessant rain and lack of public transport, evoked timid response from citizens at shopping malls, restaurants and bars on Wednesday, marking a muted resumption to limited services as the state government relaxed certain curbs in place since May 16.

On Monday, the Bengal government extended ongoing Covid-induced restrictions till June 30, while offering relaxations in view of the drop in the number of infections and deaths from last month.

Though the government allowed the running of government and private offices with 25 per cent employees, and shopping malls to operate from 11am to 6pm with open restaurants and bars during limited hours at half capacity, most of these venues wore a deserted look on Wednesday.

“It is a complicated situation. There is no public transport on the road, so getting to a mall or restaurant is difficult. Moreover, one needs an e-pass to move without hassles. Catching Covid, however, is the biggest fear,” said Sukanya Sen, a homemaker in Barrackpore, on why she did not venture out. “On top of all that, it is raining.”

Arindam Garai, owner of a multicuisine restaurant run by women in Nadia’s Krishnagar, said: “The preference for home delivery continues to be high. We have put around 30 vehicles to cater to home deliveries throughout the day. Of the day’s total sale, around 25 per cent was from those who ate food at the restaurant.”

An official of a major departmental store in Krishnagar added that they were hopeful that the situation would improve during the next couple of days. “However, the absence of public transport is a drawback,” he admitted.

Anil Jha, general manager of Bengal Shristi, which runs two shopping malls in Asansol and Durgapur, said: “We are fully prepared to serve people but there is poor turnout. It’s raining and it appears many people are still not aware of the relaxations announced by the government. We expect footfall to increase over the next few days.”

“We will like to assure our customers that we have ensured all sorts of Covid protection norms to make the mall safe for shopping,” added Arijit Chatterjee, the COO of Junction Mall in Durgapur.

Footfall at bars was also quite low. The owner of a bar in Bolpur rued the timing: “Service hours of bars (noon-8pm), announced by the government, is not ideal. People hardly visit bars during the afternoon or in the early hours of the evening”