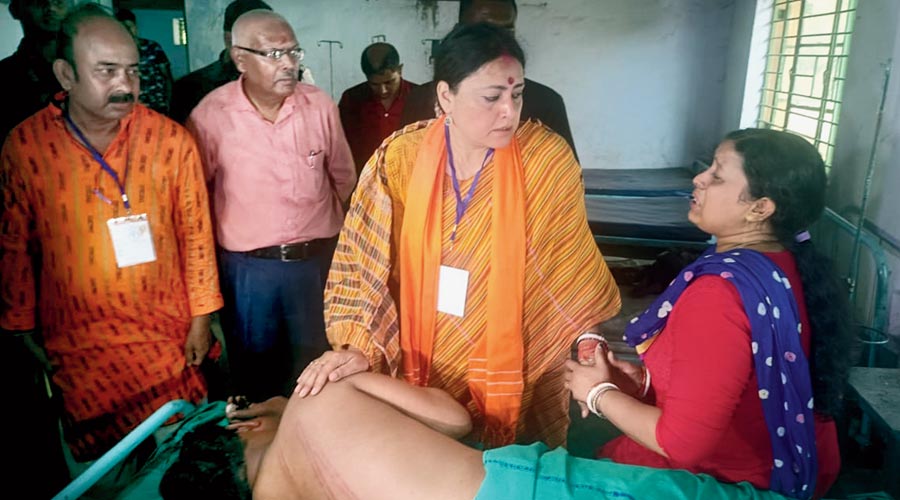 Low voter turnout marked Tuesday’s bypolls for the Asansol Lok Sabha constituency and the Ballygunge Assembly segment  but the day passed off without any major violence.

The figures may go up by another 2 per cent in the final count, a poll panel source said, but stay lower than the Lok Sabha and Assembly polls.

Trinamul said the heat and the month of Ramazan played a role in lower turnout.

“In Ballygunge, people living in the highrises don’t come out to vote. For a bypoll, the interest is lower... The month of Ramazan is also a factor behind the low turnout. But we are confident of winning both seats,” said Firhad Hakim, state urban development minister and the Calcutta mayor.

Although the elections were largely peaceful, images of stones being hurled at the vehicle of BJP candidate Agnimitra Paul in Asansol’s Barabani by alleged Trinamul workers were beamed on TV channels throughout the day.

In Asansol, a seat vacated by the switch of Babul Supriyo from the BJP to Trinamul, the saffron camp’s Agnimitra is pitted against Trinamul candidate Shatrughan Sinha.

Trinamul denied any involvement and said Agnimitra was stopped by local people.

When Agnimitra went there to visit the polling stations and oversee a complaint of rigging by the ruling party, her convoy was stopped and a group of local people, owing allegiance to Trinamul, started thumping the bonnet of her car,” said an eyewitness.

She alleged that no policeman was found when she was stopped forcibly and the mob pelted stones at her car.

The window shields of a vehicle in which Agnimitra’s central security personnel were smashed. A security guard suffered cuts on his palm.

Trinamul leaders claimed Agnimitra was roaming with a convoy of 20 vehicles in violation of the Election Commission guidelines and local people objected to it.

“The BJP candidate with armed security guards was trying to intimidate voters. Local people asked her to leave. Trinamul is not involved,” said Bidhan Upadhyay, Barabani MLA and Trinamul chief in West Burdwan.

A BJP polling agent and party president of Jamuria Gautam Mandal was beaten up with bamboo sticks by alleged Trinamul workers after he refused to leave his polling booth. He was admitted to a local health centre with bruises on his back. Agnimitra went to see Mandal there. The leader of the Opposition and BJP MLA Suvendu Adhikary spoke to Mandal over a video call from Agnimitra’s phone.

BJP leader Jitendra Tiwari who was assigned by his party to look after polling in Pandaveswar Assembly area was detained by the police for over an hour. Police stopped his car at Jhanjra colliery area at 11am and asked him to leave as he was not a voter of the locality.

“I showed them a valid permission letter of the EC but the police stopped me and forced me to stand for an hour and helped Trinamul rig the polls,” Tiwari alleged.

In Asansol, the BJP lodged 150 complaints of electoral malpractices and the CPM 84.

In Ballygunge, the BJP lodged seven complaints of electoral malpractice with the commission and the CPM five.

At Bishop’s College near Beckbagan, CPM candidate Saira Shah Halim and her election agent claimed to have identified a false female voter in the morning. Towards the end of the day Trinamul candidate Babul Supriyo claimed to have caught two fake female voters at the South Calcutta Girls College who he said were working for the BJP.

These two women claimed they were agents of the BJP candidate Keya Ghosh. Both were detained by police of the Ballygunge police station. The BJP identified one of them as Asha Nath and claimed she has been arrested as she tried to stop poll rigging.

In Asansol, the district electoral officer around 10am barred the media from covering the polls. Journalists protested, saying they had valid passes from the Election Commission. Finally, after over an hour, the media was allowed to do its job.