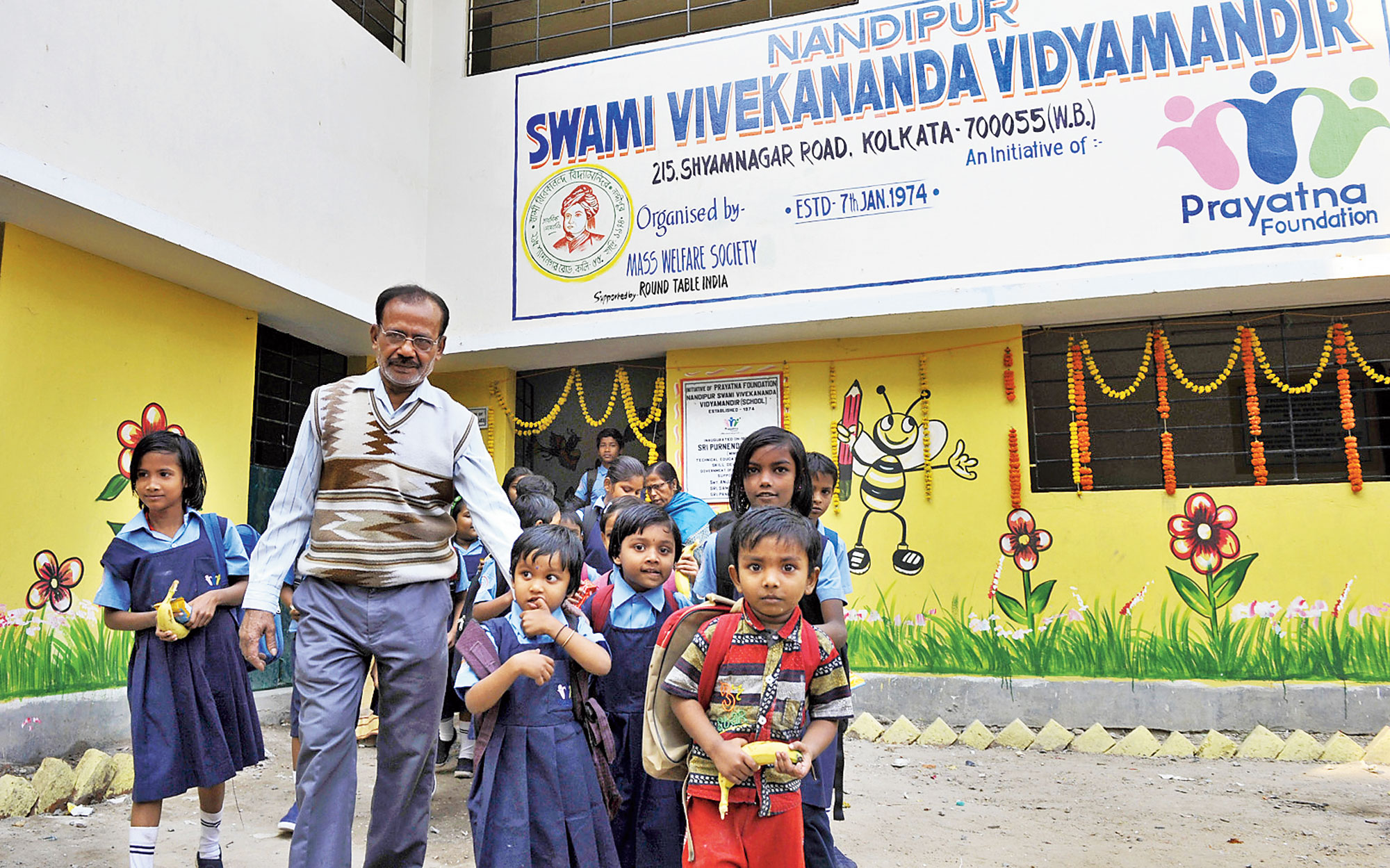 Biswanath Naru sells fish for a living, but it has been 45 years that the college dropout is mastermoshai to several children of a lesser god.

When the mastermoshai (teacher) began to pursue his second calling in life, all he could provide the poor children of Dum Dum Park was an apology for a roof over their head, a mat to sit on and free education.

As the students of Nandipur Swami Vivekananda Vidyamandir spread over five classes — kindergarten to class IV — shared a common hall, the vagaries of nature began to play spoilsport because of the poor infrastructure. The hall’s roof began to show signs of wear and tear for the lack of maintenance.

Till a couple of years ago, when the skies would open up during monsoon, water would trickle down the asbestos roof and flood the floor making it impossible for classes to continue. Naru felt the urgency of immediate repair, but his hands were tied. He wanted to separate each class from the other so that the students could have a space of their own, but there was no funds to meet his want.

But Naru’s journey has also been one of perseverance. The 66-year-old, who is never ready to take no for an answer, has overcome hurdles and did reflect a sense of self-confidence as he stood before the Nandipur Swami Vivekananda Vidyamandir’s two-storey building that has eight newly built classrooms and wide corridors. As changes happen to his school, the mastermoshai still continues with his life of a fish seller that helps him fuel his dream.

“I had not thought that we would come such a long way. All that I had requested for was partition walls in the hall so that one class would not be disturbed by the other,” Naru said.

Naru’s also acknowledges that he owes much of his success to his group of teachers and staff, who matched every step of his during all these years of struggle. 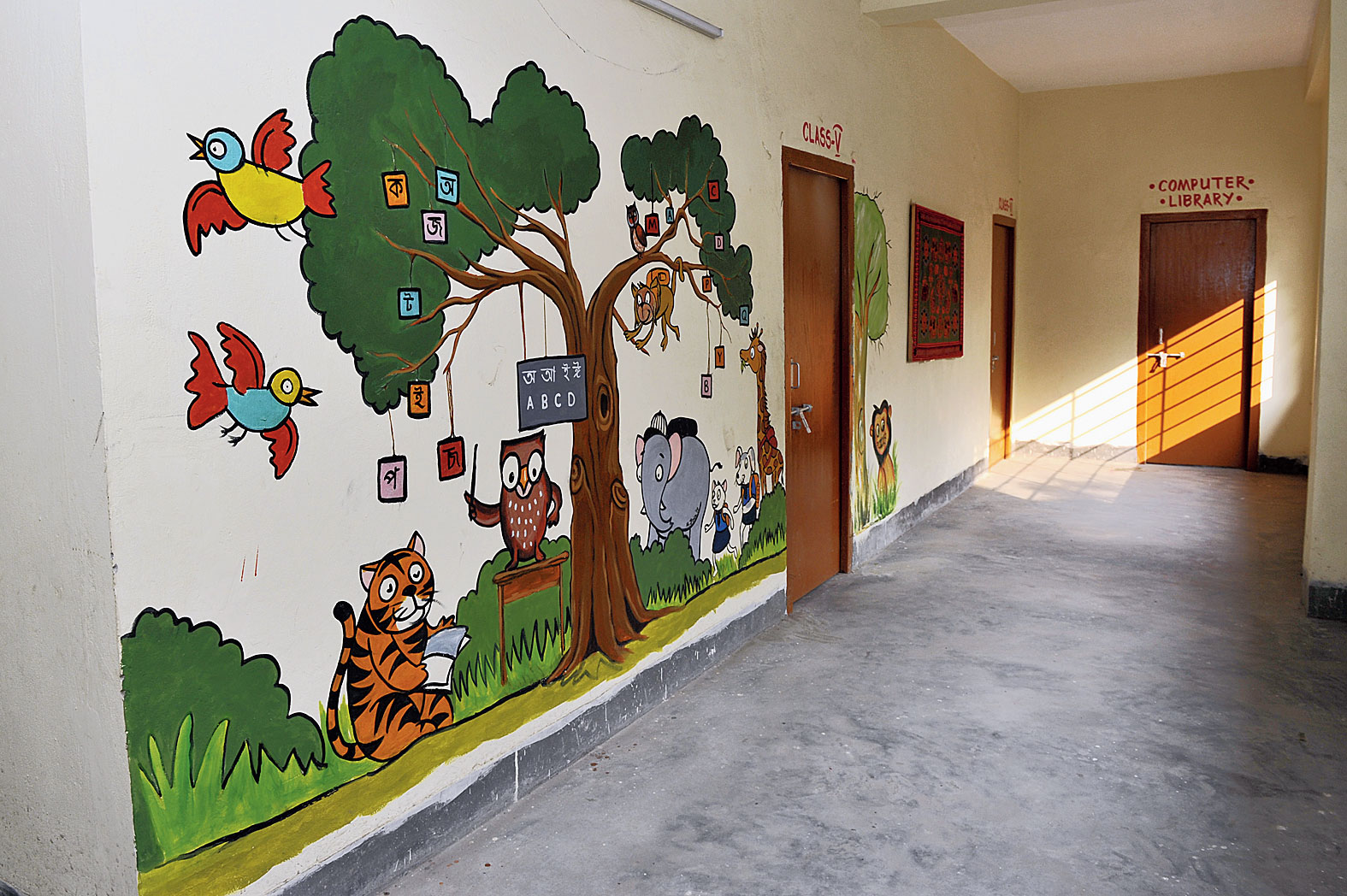 A painted wall in a corridor of the school.
Sanat Kr Sinha 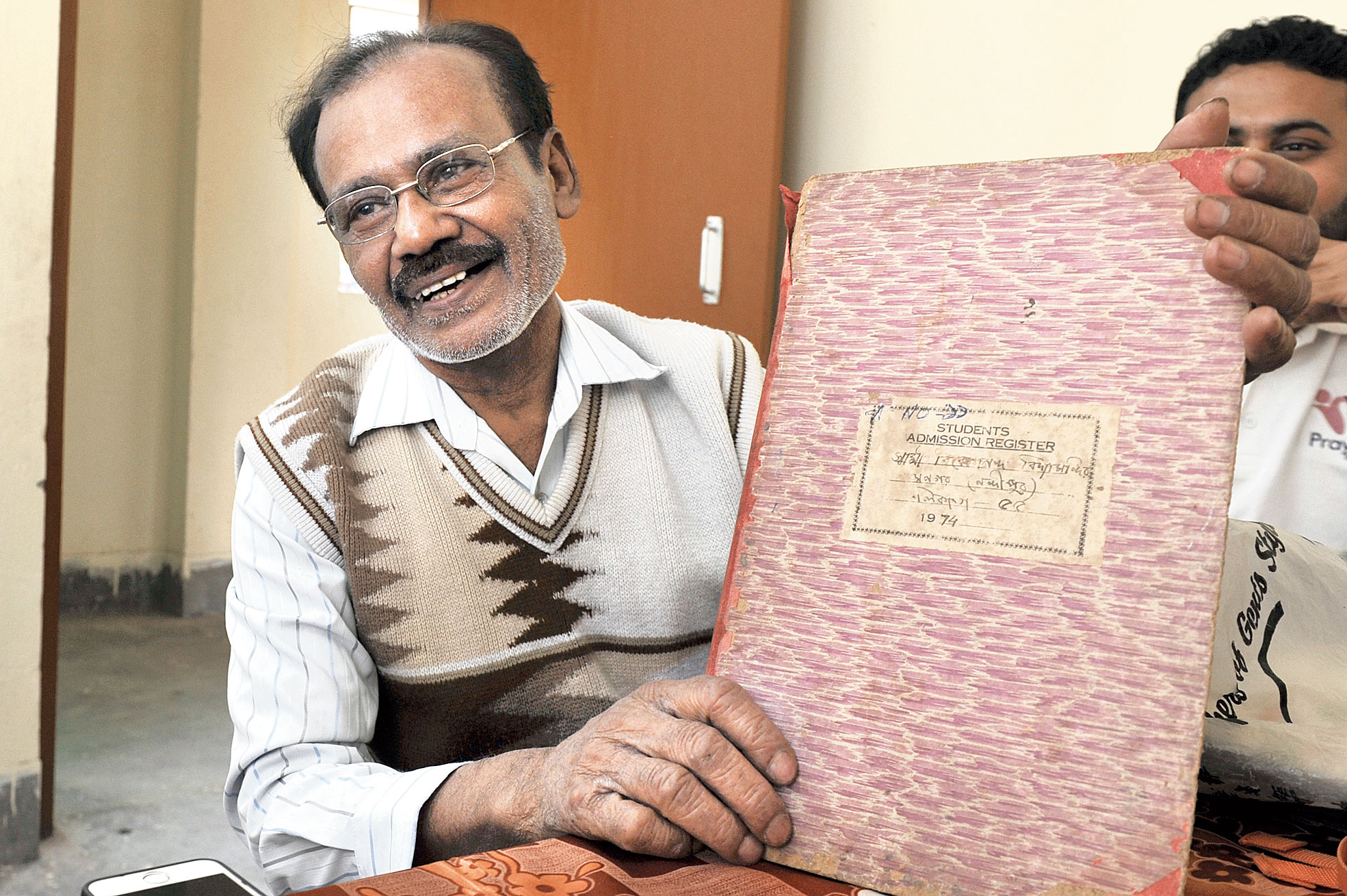 Naru shows the first register of the school when he had started it in 1974.
Sanat Kr Sinha

The two-storey building is the second big leap for an institution that began operating from a hall with an asbestos roof, the first being winning the ‘A School that Cares’ award at The Telegraph School Awards for Excellence in 2011.

In the school’s chequered four decades, while Naru has been turned down by people when he approached them for money to repair the facility, build a toilet or even pay the teachers, there were some who went out of their way to help him.

Many of those who came forward to help him were his customers at the Dum Dum Park fish market. Here again Naru’s insistence paid off as his initially sceptical customers turned into contributors when they visited the school and was awed by his effort at educating poor kids.

One among them was Sujata Sen, the former director, east India, British Council, who was approached for a visit to the school when she had gone to buy fish from Naru on an otherwise ordinary day in 2005.

Sen was initially “intrigued”, but when she went to the school she saw “an amazing set of teachers,” who were teaching 70-odd poorest of the poor children. The children were getting “good education” and she was mesmerised to see them “reciting and singing beautifully”.

“I really started liking them because what they were doing was amazing. That’s how I got involved. Whenever I went back I found they were really sincere, a set of teachers who were going beyond their means, beyond their scope and providing education to children who had otherwise no access to it,” Sen who is now the CEO of Future Hope told Metro.

Naru, who has missed out on education because of family compulsions wants to ensure that it does not happen to others, goes the extra mile to keep the students coming to school.

For years Naru has been going to College Street to buy books for his students. He does it for he knows that their parents cannot afford to buy books or lack the inclination for it.

Every year he spends about Rs 15,000 on books and he doesn’t remember since when he has been doing it. “For many years now,” is all that Naru could remember.

Despite the challenges that have come his way, Naru feels he is “lucky”.

As he chats with Metro, he rattles off names of people who have helped him in various “significant” ways. Whether it is the person who has donated four tube lights or his assistant at the shop or his mother, a domestic help, who put in a word about his school to the wife of a board member of the NGO that constructed the building.

“The woman then made several visits to the school, to see the place and know more about it, meet the students and see the kind of work we were doing here,” he said.

The NGO Prayatna Foundation started by giving uniforms, building a portion of the toilet and finally constructing the school building by bringing down the ramshackle structure and building an extra floor. Since last month, the NGO is providing health food for the kids.

When construction started in 2017, the school had to shift to a local club from where it operated for over a year.

But Naru was impatient and wanted to be back to his school. Even before construction was complete, Naru and his 60 students were back because running a school from a club had its difficulties.

One thing he rues about is the depleting number of students because of schools mushrooming in the locality. Naru, the pragmatist, however, has a solution — a skill development centre for women.

“If I can engage the women and impart skill training, it would help them earn a living while their children will study in the school. This will help draw more students to my school.”

It is for the future to tell whether his plan will work, but for now, Naru is living his dream. 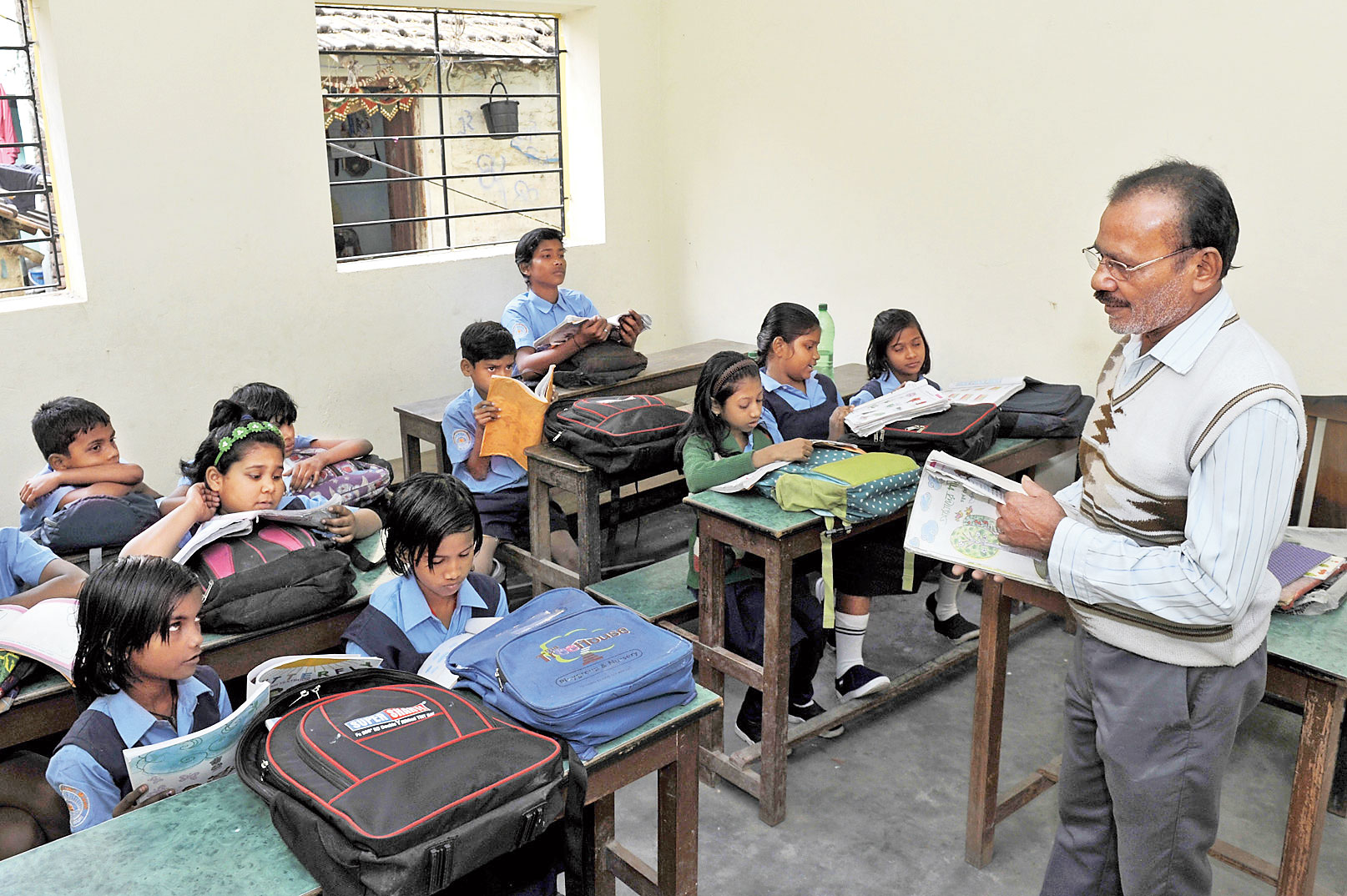