Successful handling of the invitees results in building confidence in the state, says principal secretary of industries department 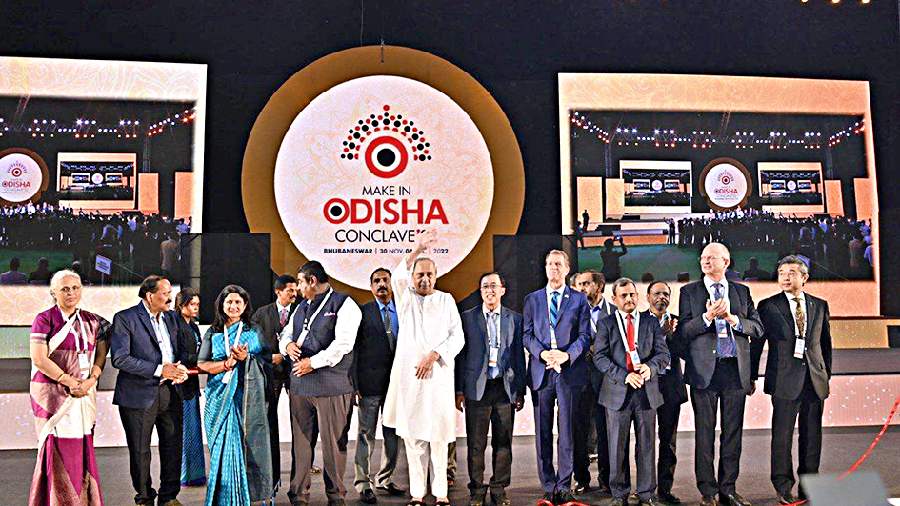 Andalib Elias, the deputy high commissioner of Bangladesh in Calcutta, was in Bhubaneswar last week for the Make in Odisha conclave and the career diplomat couldn't stop talking about over 24 hours that he had spent in the neighbouring state to take part in the five-day meet.

The Odisha government claimed at the end of the industry-summit-cum-exhibition, which got the tag of the biggest such show ever held in eastern India, that the event had generated proposals for investments worth over Rs 10.5 lakh crore. The proposals came from over 741 companies in a wide range of areas, from metals, chemicals and petrochemicals to IT, agro and food processing.

"It was really grand and impressive.... Everything looked so professionally handled," said Elias, who was present at the inaugural programme at Janata Maidan in Bhubaneswar last Tuesday.

A breathtaking inaugural show with over 600  drones, depicting Odisha's natural beauty, cultural heritage, sports enthusiasm and industrial capabilities, gave the audience a new experience at the venue, where the organisers had put up state-of-the-art anamorphic screens besides displaying the state's very own sand art. The grandeur of the over two-hour inaugural programme became a talking point among the audience, including the who's who of India Inc.

The Odisha show was, however, not only about look and feel, said Elias.

"There was also this element of no-nonsense approach.... At the dinner after the inaugural show, the industry minister of the state (Pratap Keshari Deb) made it a point to talk to each of us there. He met me separately and explained why Bangladesh needs to do business with Odisha. And after me, I saw him getting hold of the Nepalese ambassador," Elias said while explaining how Patnaik's team walked an extra mile to get the conclave's message — come, join the juggernaut — conveyed to each participant in the show.

Not just the industries minister, a professional team of government officials from several departments looked after the guests, including investors, diplomats and policymakers, and was there round-the-clock to address their queries. "The successful handling of the invitees results in building confidence in the state," said Hemant Sharma, principal secretary of the industries department.

He linked the outcome to advanced and meticulous planning and a professional approach to the execution.

"Such industry summits are held in different states and the offerings, in terms of incentives and messages from the governments, are almost similar.... The form in which it is delivered makes the differentiation," said Sharma, whose presentation at the inaugural plenary session, explaining the strengths of Odisha, drew applause from L.N. Mittal of ArcelorMittal and other business titans.

The successful show in Bhubaneswar had a Bengal connection as Genesis Advertising, headquartered in Calcutta, was the event management agency for the programme. After the curtains came down on the exhibition on Sunday, Sharma, in his thanksgiving address, got the entire Genesis team, which was the agency for MIO back in 2016 as well, on the stage to appreciate them.

"We had an over six-month preparatory phase for the summit... Everything, from the guest list to the menu for meals each day, was planned in advance. We spoke to several agencies and then finally, zeroed in on Genesis. Being an agency from Calcutta, they could feel the pulse of Odisha and put together an outstanding show," said Sharma.

Ujjawal Sinha, the founder of Genesis, which had organised similar events in Bengal and Assam in the past, said the Odisha conclave was an example of how professionally organised events assumed importance to send out the message on the model of governance in a state, which woos the potential investor.

"In this era of social media, the videos or the images have become supreme... Any big event has to have those visuals and the entire event's planning, including the inaugural session, was conceived accordingly. In the case of the Odisha event, the challenge was to keep over 20,000 attendees engaged and mesmerised through the summit," said Sinha.

"The fact is, form in this visually-driven world has become as important, if not more, as the content," said Sinha, referring to the changing trend in organising such events.