Locket ‘in dark’ about date change of BJP event

Dilip Ghosh, also had no idea till Wednesday morning that the programme to celebrate 8 years Modi govt had been re-scheduled 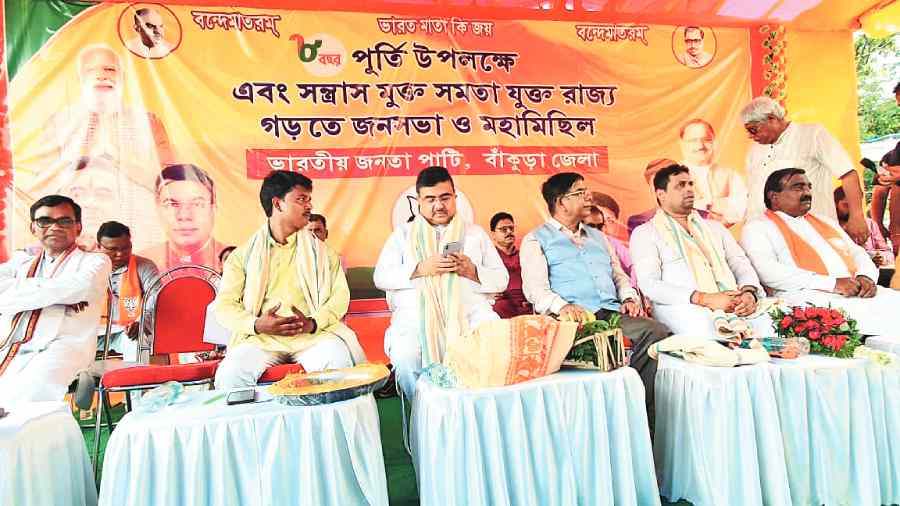 Suvendu Adhikari and other BJP leaders at the programme in Bankura on Tuesday to celebrate the Modi government’s eight years
Telegraph Picture
Arkamoy Datta Majumdar   |   Calcutta   |   Published 16.06.22, 01:27 AM

Factional feud in Bengal BJP has cast its shadow on an event organised in Bankura to celebrate the completion of the Narendra Modi government’s eight years.

Hooghly MP Locket Chatterjee, who was appointed in-charge of programmes being organised across the state for the celebrations, was kept in the dark about the decision to advance the event in Bankura from Wednesday to Tuesday, said sources.

It had initially been decided that Chatterjee, along with former state president Dilip Ghosh, would participate in the event in Bankura on Wednesday (June 15). On June 13 night, BJP’s Bankura district president Sunil Rudra Mandal called up Chatterjee and told her that the event had been advanced to Tuesday.

“An irritated Chatterjee refused to participate in the rescheduled event as the date had been changed without her consent. Finally, Opposition leader Suvendu Adhikari attended the event. Bankura MP Subhash Sarkar, who was supposed to attend the June 15 event, was also present,” said a BJP insider.

The Midnapore MP had no idea till Wednesday morning that the programme had been re-scheduled. Ghosh called up Chatterjee to figure out if the event was happening at all. “Locket Chatterjee told me that the event had already taken place. I wasn’t informed by anybody,” Ghosh said. “I was asked by the state president to attend the sit-in on Mayo Road (in Calcutta) and I went there.”

Chatterjee refused to comment on the matter. Repeated calls to the Bankura district chief went unanswered.

The strenuous relationship between BJP’s state general secretary (organisation) Amitava Chakraborty and president Sukanta Majumdar on one hand and leaders like Ghosh and Chatterjee on the other has long been a talking point. Adhikari has reportedly sided with the Chakraborty-Majumdar camp.

“All the newly appointed district presidents are puppets in the hands of Amitava. They do as he instructs them to. The dishonour meted out to Dilipda and Locketdi is a handiwork of Amitava,” a senior party leader said.