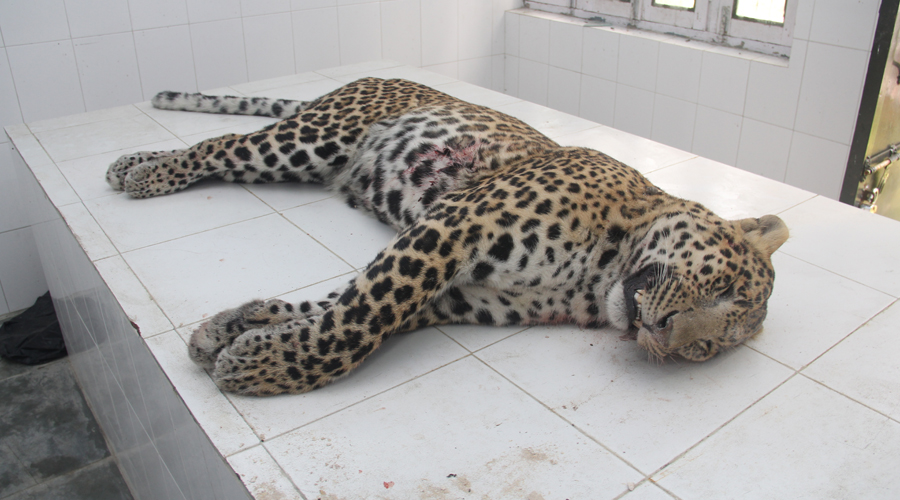 The decomposed carcass of a wild leopard was recovered from the drains of Diana tea estate located in Banarhat block of Jalpaiguri on Wednesday morning.

Foresters suspect that the animal might have died due to poisoning and are waiting for postmortem report.

Sources said a group of workers spotted the carcass when they were heading towards the plantations for work. They informed the garden authorities who in turn passed the information to the foresters.

Soon, a team from the Binnaguri wildlife squad reached the spot and recovered the body.

“It seems that the animal had died threefour days back as the carcass had started decomposing. Also, as no external injury was spotted on the carcass some foresters suspect that the animal might have died due to poisoning. The carcass has been sent to the nature interpretation centre in Lataguri for autopsy and cremation,” said Subhasish Roy, range officer of the squad.

In another incident, a female gaur (Indian bison) and two calves were found dead near Haldibari tea estate, also in Banarhat block, on Wednesday.

Foresters from Moraghat forest range have recovered the carcasses. “It seems that all three were struck by lightning. We can, however, confirm the cause of death only after a postmortem is conducted,” said a forester.

Locals said the leopard had sneaked into the locality and taken shelter under a pile of straw. As they raised an alert, it entered into an adjoining tea plantation.

Soon teams from Khunia and Binnaguri forest range reached the spot, along with a team from Nagrakata police station.

“As the foresters burst sound crackers, the animal came out and pounced on Anukul Roy, a forest employee, and sneaked into the plantation again,” said a source.

“In the afternoon, the foresters again burst crackers in search of the big cat. The leopard came out of the plantation and attacked Sushil Bhakta, another forest employee,” the source added.

The foresters informed that both the injured employees are under treatment at a health centre in Sulkapara.

“We have put nets across the plantation to prevent the animal from sneaking into the neighbouring villages. Our men are monitoring the area and locals are also on alert,” said a forest officer.