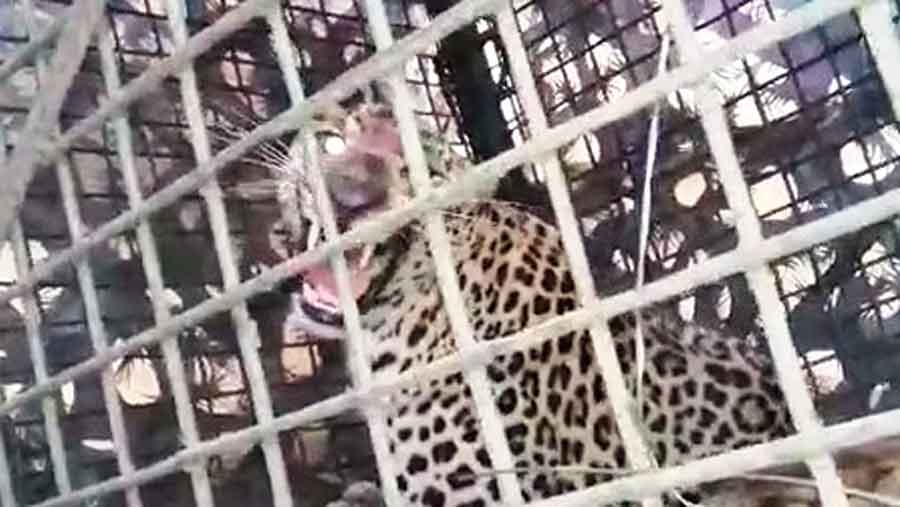 The leopard in the cage at the Bhagatpur tea estate in Jalpaiguri on Saturday
Telegraph picture
Our Correspondent   |   Jalpaiguri   |   Published 16.08.20, 12:16 AM

An adult female leopard was caged by the state forest department from the plantations of Bhagatpur tea estate located in Nagrakata block of Jalpaiguri early on Saturday.

“For the past one month, the leopard had been roaming around in the tea estate. It had taken away cattle and poultry on a number of occasions and we were apprehensive that it might even attack people. It is good that it has been finally caged,” said Shyamsunder Saha, an assistant manager of the garden.

Sources in the state forest department said they had laid a trap using cattle as bait. “We have rescued the animal and it has been taken to the nature interpretation centre in Lataguri located on the fringes of the Gorumara National Park. There, it would be kept in observation for some time and then will be released in the wild,” said a forest officer.

Those residing in Bhagatpur, however, claimed that they have sighted another leopard roaming around in two other sections of the plantation.

“We suspect there are more leopards in the garden for which cages should be laid,” the assistant manager said.

With this, as many as 26 leopards have been trapped from 22 tea estates — all in the Dooars — in the past six months.

In the Dooars and the Terai, there are a number of tea gardens which are located on the fringes of wildlife habitats. Intrusion of animals like leopards, elephants and gaurs (Indian bison) is common in these gardens.

R.A. Sharma, secretary of the Dooars branch of Tea Association of India, said they always keep their members on alert.

“Intrusion of animals in tea gardens is a perennial problem for us. During the current tea season, we have seen that leopards have been sighted in a number of tea estates. This has only added to the problems and losses of tea companies as workers have expressed reluctance to work in tea plantations, unless the leopards are trapped,” added Sharma.