In north Bengal, this is the first time that such a service has been introduced on the broad gauge 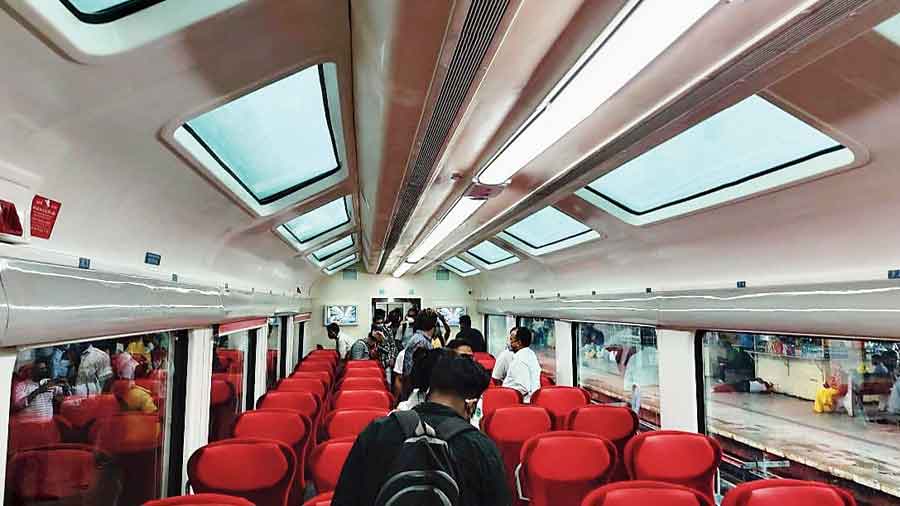 The vistadome coach of the special train that reached Alipurduar from New Jalpaiguri on Saturday.
Anirban Choudhury
Our Bureau   |   Siliguri, Alipurduar   |   Published 29.08.21, 12:51 AM

The special train service with a vistadome coach for tourists who seek to enjoy the spectacular beauty of forests in the Dooars was introduced by the Northeast Frontier Railway (NFR) from New Jalpaiguri on Saturday.

John Barla, the Union minister of state for minority affairs and Alipurduar MP, flagged off the train from New Jalpaiguri. In north Bengal, this is the first time that such a service has been introduced on the broad gauge. Earlier, the Darjeeling Himalayan Railway (DHR) introduced vistadome coaches in its toy train service.

“The train will have a vistadome coach with 44 seats. Also, there will be two AC chair car coaches, two general chair car coaches and two power-cum-luggage vans. The IRCTC will provide refreshment on board,” said an official of NFR.

Along the route, the railways will also make arrangements in some of the stations where tourists can have various experiences to enrich their journey.

“Response is good. People are enthusiastically booking tickets for the vistadome coach. We hope in due course, it will turn out as a major attraction for tourists visiting north Bengal,” said Guneet Kaur, the chief public relations officer of the NFR.

Parthapratim Roy, a train enthusiast on board the inaugural journey, said: “I believe this new train service will attract more tourists to enjoy the beauty of the Dooars on the foothills of the Himalayas .”

The special train being flagged off from Alipurduar Junction during its return journey.
Anirban Choudhury
Tea safari

The DHR authorities announced the launch of a “Steam Jungle Tea Safari” from August 30, that is, Monday “It will run between Siliguri Junction and Rongtong every day. Passengers can board vistadome dining cars and enjoy a ride in the toy train. It will be a four-hour-long return journey with stops in Sukna and Rongtong,” said a source.

As part of the trip, tourists can visit the DHR gallery in Sukna. “Complimentary refreshments would be served on board. A trip per person will cost Rs 1,200, with some discount during lean seasons (winter and monsoon months),” said an official.

Toy trains back on track