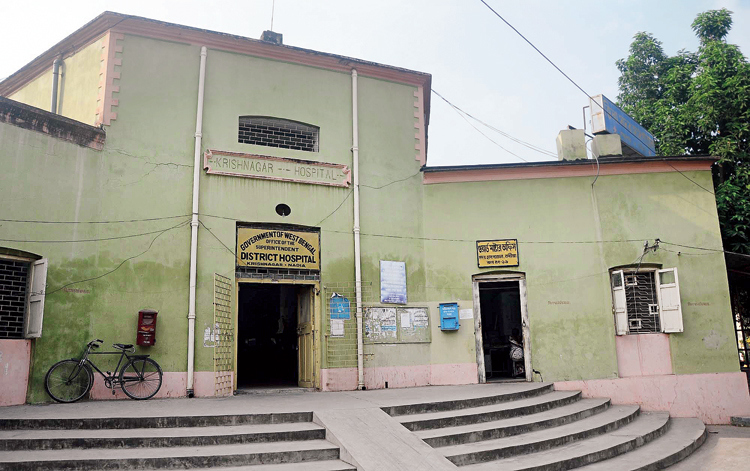 A nine-month-old tested positive for Covid-19 here on Tuesday night, a development that has sent the Nadia administration into tizzy as the child with acute respiratory problems was erroneously admitted to the SNC unit of Krishnagar Sadar Hospital on May 9 night, and not the SARI hospital.

Even though the Sadar hospital authority did not officially acknowledge the admission, district administration has advised it to find out if any child had come in close contact with the nine-month-old boy.

Sources said the child, a resident of Bagh-Anchra area of Santipur town, had earlier been admitted to a private hospital in Calcutta. However, the hospital was closed after two nurses tested positive for Covid-19. Local sources in Santipur claimed that the parents of the child had been living at a rented accommodation in Howrah’s Salkia for the past two months and had recently returned home.

On May 9 night, the child fell ill and was referred to the SARI hospital by a local rural health unit. The child was taken to SARI hospital, but his parents did not admit him there and brought him to the Sadar hospital.

Sources said a liaison health officer had advised officials to send the child back to the SARI hospital. “However, flouting his advice, the parents took the son to the SNC unit of the Sadar hospital and later shifted him to the JNM Hospital in Kalyani,” said a source.

Questions have been raised as to how the child with Covid-19 association history was taken to the SNC unit and not to the local hospital, a dedicated SARI hospital, where a neonatal ventilator was available.

When asked, an officer of Nadia’s Covid management cell said: “We have no clear information...we are examining it. Proper precautionary measure will be taken if any child was found to have come close to him.”

“As far as we know, the child was brought to the SARI hospital at night but his parents refused to admit him there and took him back home. Knowing this, we had sent a health team to their home the following morning and the child was sent to JNM Hospital in Kalyani. But, he was referred to the NRS hospital in Calcutta,” the officer said.

However, the JNM Hospital authority claimed it did not refer the child to the NRS hospital. The parents took away the baby within one hour after he was brought to the paediatric department.

Medical superintendent of the JNM Hospital Avijit Mukherjee said: “The child was advised isolation at the hospital. But his mother turned restless and refused to stay here. She eventually got him discharged signing a risk bond.”

The child was at the SNC unit of Krishnagar Sadar Hospital from May 9 night till May 12 when he was tested positive.

Sources said on Wednesday night two nurses of Sadar hospital had been sent to quarantine along with five family members of the child. The Bagh-Anchra Baro Kulia village has been sealed off.