KLO is an armed outfit floated by a section of Rajbanshi youths in the late nineties which of late, is trying to regroup over the demand of separate statehood 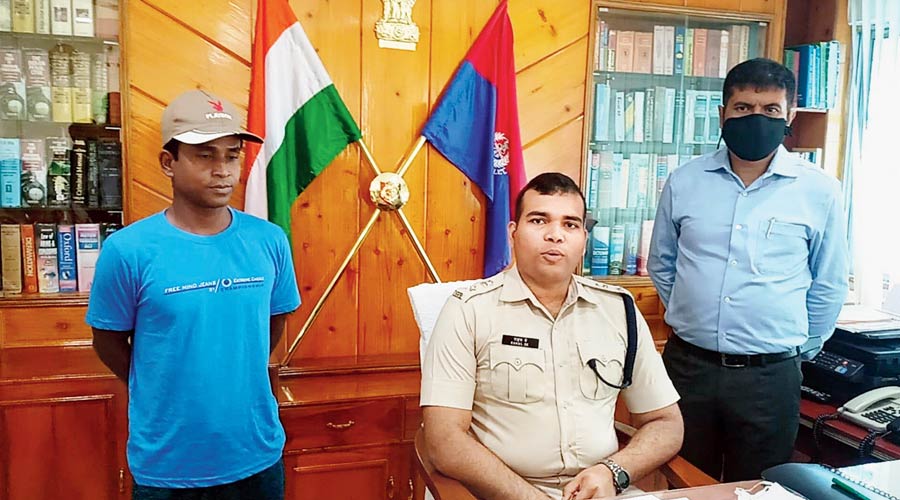 Sudip Sarkar, the KLO militant (left), after his surrender at the office of Rahul Dey, the police chief of South Dinajpur, in Balurghat on Monday.
Telegraph Picture
Kousik Sen   |   Raiganj   |   Published 19.10.21, 01:23 AM

A trained militant of the Kamtapur Liberation Organisation (KLO), a banned terror outfit, surrendered before police in Balurghat of South Dinajpur on Monday.

“We appreciate his decision to surrender and return to the mainstream. We will also see that he is rehabilitated like other former militants of the organisation in the district,” Dey said.

According to police sources, four former militants of the KLO — an armed outfit floated by a section of Rajbanshi youths in the late nineties which of late, is trying to regroup over the demand of separate statehood — have been provided with jobs of special home guards from the district.

“In due course, Sudip Sarkar will also be provided with employment so he can run his family. It is a part of the initiative taken by the chief minister Mamata Banerjee to help these people,” said a police officer.

Sudip, when asked about his decision, said it was a wrong decision to join the terror outfit.

“I got disillusioned and felt it necessary to return to normal life. I have full confidence in the state government,” he added.

Police sources said they are in contact with some other militants and linkmen (non-trained ones) who have expressed willingness to surrender.

“Some more of them will be back into the mainstream soon,” a source said.