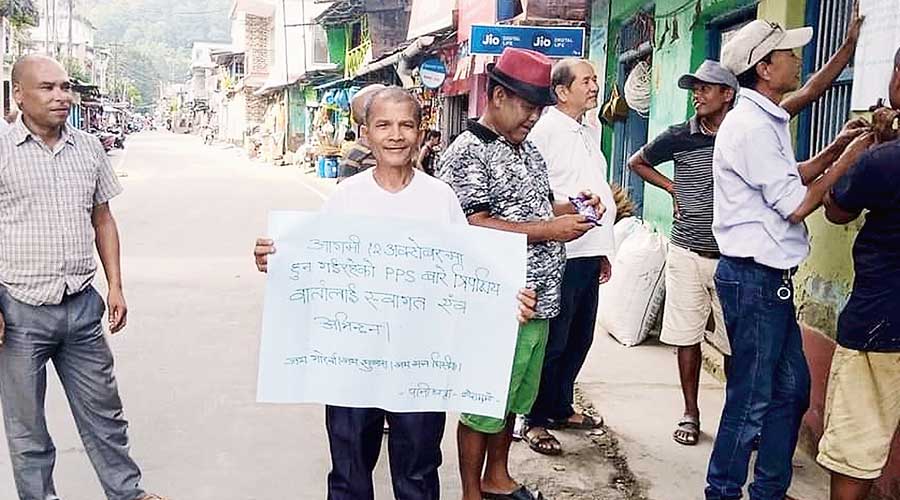 A GNLF supporter holds a poster at Panighata on Wednesday to thank the central government for convening the meeting on the Gorkha “issues”. Panighata is around 30km from Siliguri.
Picture by Passang Yolmo
Vivek Chhetri   |   Darjeeling   |   Published 07.10.21, 01:37 AM

The fledgling Bharatiya Gorkha Prajatantrik Morcha (BGPM) has demanded that its MLA from Kalimpong be invited to the October 12 talks convened by the Centre for “resolution of issues related to Gorkhas”.

The demand comes in the wake of allegations levelled by some hill parties that the list of “stakeholders” prepared by the Union home ministry for the talks is tilted towards the BJP.

Amar Lama, the general secretary of the BGPM, said: “We demand that our Kalimpong MLA Ruden Sada Lepcha be invited to the meeting as he is an elected public representative. So far, he has not received the invitation.”

Invitation letters were issued by Paritosh Yadav, assistant section office, Union home ministry (Centre-State division), on Tuesday evening. The invitation has been sent to personal emails of various leaders and according to information received from multiple sources, the invitees are mostly public representatives from the BJP and its allies in the Darjeeling hills.

Darjeeling MP Raju Bista, Alipurduar MP John Barla and MLAs of Darjeeling, Kurseong and Kalchini, Neeraj Zimba, B.P. Bajgain and Bishal Lama, respectively, have been invited to the meeting in New Delhi. All the invitees belong to the BJP.

Among political leaders called to the talks to be chaired by Union home minister Amit Shah are Gorkha National Liberation Front president Mann Ghisingh and Communist Party of Revolutionary Marxists president R.B. Rai. The GNLF and the CPRM are allies of the BJP in the hills.

The omission of Lepcha from the list of the invitees has surprised the BGPM. “How can the Centre call their two MLAs from the hills and ignore our MLA? It is absolutely unfair,” said Lama.

“We demand that talks be on Gorkhaland and nothing else,” said Lama, whose party is in alliance with the Trinamul Congress which is opposed to the statehood demand.

The BJP has not categorically stated either that it supports Gorkhaland.

The Gorkha Janmukti Morcha hasn’t been invited to the talks either. Its president Bimal Gurung said: “We have no faith on the Delhi meeting. The BJP has ditched the people of the hills repeatedly. Even if we are invited, we won’t attend the talks.”

The Morcha is an ally of Trinamul.

The Centre had called a tripartite meeting on August 7, 2020, on “issues related to Gorkhaland” but within days, the agenda was changed to "issues pertaining to the Gorkhaland Territorial Administration".

Adivasi-Gorkha Sanyukta Samity (Dooars) president Sagan Moktan on Wednesday said people of the Dooars would keenly follow the talks. “If the talks are fruitful, we will welcome them. But if the meeting fails to fulfil our hopes, we will hit the streets against the participants in the meeting,” said Moktan.