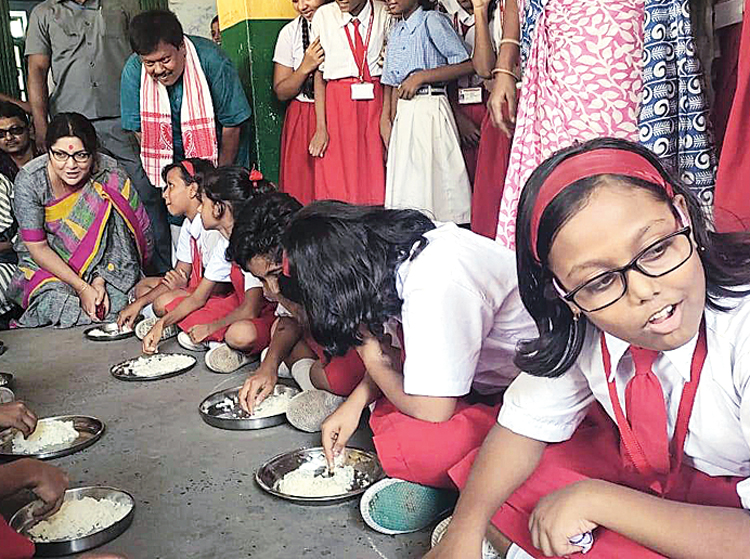 A sudden visit by Hooghly MP, Locket Chatterjee, to a high school in Chinsurah on Monday revealed that students were being given only boiled rice and salt for midday meals.

Chinsurah Balika Bani Mandir has 1,200 students, of whom 600 from Class V to Class VIII are entitled to midday meals that consist of boiled rice, a dish of mixed vegetables and pulses. They should also be served eggs at least once a week.

The BJP MP alleged that the chairman of the Trinamul-run Chinsurah municipality, Gourikanta Mukherjee, who is also the president of the school managing committee, had misappropriated funds provided by the administration for the midday meals.

Sources said the students were being served only rice and salt for the past five days. A teacher said the school did not have a teacher-in-charge for the past 28 days to sign cheques for purchasing items for the midday meals.

Education minister Partha Chatterjee has ordered a probe. 'This kind of serving of midday meals can't be tolerated. The matter will be investigated,' the minister said when journalists asked about Locket's allegation.

Y. Ratnakara Rao, the Hooghly district magistrate, said: 'I have formed a team to know why students were provided with salt and rice only. We will lodge an FIR against those who are responsible. The team will submit a report to me and appropriate legal action will be taken,' said the DM.

Locket was accompanied by Hooghly district BJP president Subir Nag during the visit to the school.

'I had been informed about the corruption at the school by the managing committee before the Lok Sabha polls. Today, I conducted a surprise visit to the school and found out that girls are having just boiled rice and salt for midday meals. I have reports of malpractices at the school. I have come to know that 5,000 eggs were bought with Rs 25,000 earlier but the students have been given only rice and salt,' said Chatterjee.

'About 257kg of rice that was stocked at the school disappeared. I want to know which leader or minister grabbed it,' she added.

Sources said the earlier teacher-in-charge, Samita Kushari, had been transferred on July 22. A meeting of the school managing committee on July 20 voted to select the senior most teacher, Sumita Meel, as the in-charge.

'But the president of the managing committee (Mukherjee) forcibly appointed teacher Purba Mukherjee as the in-charge. We lodged a complaint with the district inspector of schools and the process was stopped. We have no teacher-in-charge now,' said Deepanwita Ghosh, a teacher and a member on the managing committee.

Mukherjee, the president of the managing committee, said: 'This is clearly politics by the BJP. A section of teachers intentionally provided rice and salt today (Monday) to show the school in bad light. The BJP wants to control the school and hence, the MP went there and staged a drama.'

Rao said the district administration would inspect 1,000 out of 4,000 schools in the district on Wednesday to see whether midday meals were being properly served. The DM said he had also requested the education department to appoint a full-fledged teacher-in-charge at the school in Chinsurah.