Amiyo Sundar Biswas, who is all of 3ft 10 inches wins silver medal at the World Youth Cup in Croatia for karate 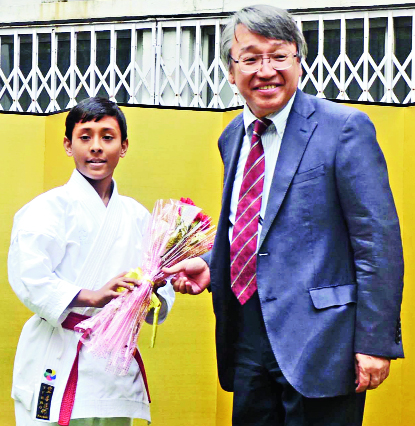 At 3ft 10 inches, Amiyo Sundar Biswas is among the shortest boys of his class but no one in his Konnagar school would dare pick a fight with him.

He has brought home a silver medal from the World Youth Cup in Croatia in karate this July. Even there, he defeated boys taller and heavier than him.

On Tuesday, Amiyo was invited by the consul general of Japan to demonstrate kata moves. Kata is one of the three major parts of karate. “It is a kind of shadow-fight that teaches self-defence, unlike kumite which involves one-to-one combat,” said his teacher Premjit Sen, who trains him at his Salt Lake academy.

It was a treat to watch Amiyo’s lightning fast moves, accompanied by blood-curdling yells and the raspy intake of breath.

Amiyo has been learning karate since he was five, egged on by his grandfather who had trained as a boxer. “I spotted him at one of the sub-branches of my academy and brought him under my direct guidance,” said Sen.

Since then, Amiyo has been taking a train from Konnagar to Bali and then boarding the Dankuni local to reach Bidhannagar Road station daily for practice.

The results are showing. Amiyo is a four-time national champion, consecutively since 2011. Then he went on to win gold at the Commonwealth Games in Delhi in the 11-12 year age group in 2015. The world runner-up title in under-14 kata is the latest feather in his crown.

“At the tournament, he won four bouts against countries with strong karate background like Spain, Iran and Japan by a 5-0 verdict. In the final, he lost to a Turkish competitor by a narrow margin. The five judges were split in their verdict, with two ruling for him and three against,” said Sen, who, being a referee at the tournament, was officiating a different match and could neither give him guidance nor watch him perform. “A nearby screen that was showing his group suddenly went blank and I had to call up another student to figure out how Amiyo was doing.”

The 14-year-old’s next target is the Asian Championship in Malaysia next March.

The consul general of Japan, Masayuki Taga, was impressed not only with Amiyo but with the popularity of karate in Bengal. “I have been to a few events here. Everywhere there are hundreds of people in attendance. Amiyo is a young champion. He deserves encouragement,” he said, while felicitating him.