The event was organised to create awareness on tiger conservation 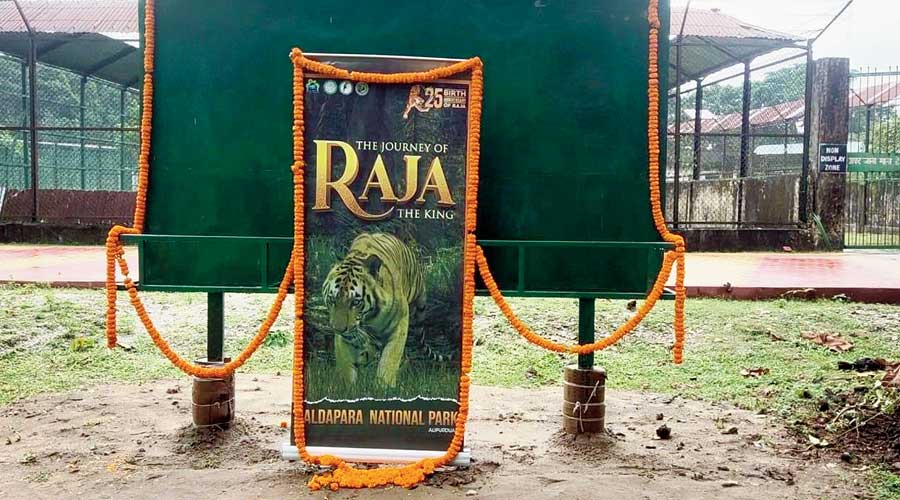 On Monday, a picture of Raja was put at the entrance of the rescue centre with details about his life.
Anirban Choudhury
Anirban Choudhury   |   Alipurduar   |   Published 24.08.21, 03:37 AM

The Jaldapara wildlife division of the state forest department on Monday celebrated the 25th birthday of Raja, a royal Bengal tiger from the Sunderbans and brought to the rescue centre in South Khayerbari, Alipurduar district.

The event was organised to create awareness on tiger conservation, said foresters.

Sources said back in 2008, Raja was brought to the rescue centre on August 23, after being treated by vets in Calcutta for his wounds from a crocodile attack in the Sunderbans. THe was 12 years old then.

“In India, Raja is probably the senior-most tiger in captivity. We have information that there is a female tiger that is at a zoo in Texas, the US, which is 25 years and 319 days old,” said a forest officer.

On Monday, a picture of Raja was put at the entrance of the rescue centre with details about his life.

“We also organised an online drawing competition and quiz . Many children participated in the events,” said Deepak M., the divisional forest officer of Jaldapara wildlife division. The forest department also uploaded pictures and video footage of the tiger on its official website.

“We however, did not disturb the tiger,”  the DFO said, adding Raja was inside his enclosure and in good health.