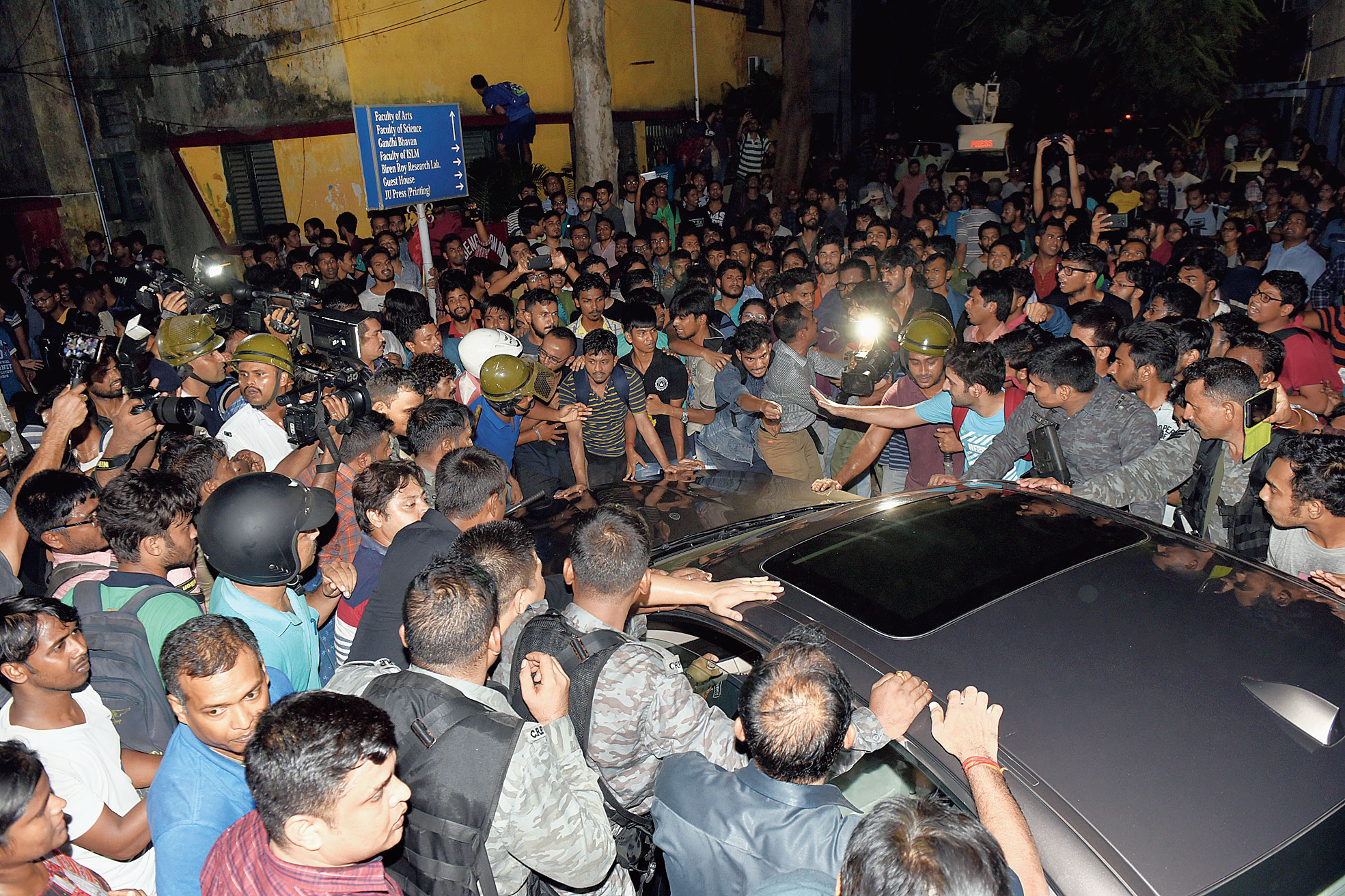 Jadavpur University teachers played a key role in ending the stand-off between students and the Union minister after they succeeded in convincing the protesters that ABVP supporters were using their agitation as an excuse to unleash violence outside the campus.

Nearly 15 teachers went to the students, who were squatting in front of governor Jagdeep Dhankhar’s car, and also told them that it was more important to plan a bigger protest in the future against Thursday’s violence and the chancellor’s alleged partisan role.

When the governor and the minister were seated in the car and barricaded by hundreds of students, flames leaped outside JU’s Gate Nos. 3 and 4. Traffic was stranded. According to several accounts, the attackers were armed with lathis and acid bottles.

Before proceeding towards Gate No. 4, they had pulled down posters and banners of other student organisations and set them on fire on the road outside.

Apprehending bigger trouble, the teachers convinced the students that they should let the governor go because the ABVP activists were using their agitation to create trouble outside the campus.

“They had reached the union room and we had to act fast,” one teacher said.

That is when the promise of a “bigger agitation jointly by the students and teachers” appeared to work.

A teacher said: “They agreed when we gave them the assurance that the teachers would fully support them to launch an intensified movement from tomorrow (Friday) against the role of the chancellor and the Union minister.”

Parthapratim Biswas, president of the CPM-backed Jadavpur University Teachers’ Association (Juta), said: “In a university like ours, everyone has the right to express their views, even the Union minister. But the way the vice-chancellor was told that he should either call the police or resign was unfortunate and shocking.”

“The teachers are strongly opposed to this behaviour of the Union minister…. This kind of incident had never happened at Jadavpur University…. When we convinced the students that we, too, were opposed to this, the students agreed to lift the agitation,” he added.

One of the protesting students said: “They (the ABVP activists) were armed with lathis and acid bottles. They were continuously hurling the bottles inside the campus from outside. The situation was going out of control. So we decided to withdraw the agitation when we got the assurance from the teachers that they will support our movement.”

Another teacher said there was enough reason to build a bigger protest in the future. “What the minister has done today is not right. We also don’t support the role played by the governor. He is our chancellor. He shouldn’t have come here only with an intention to rescue the minister,” he said.

The teacher said he had also told the students “what you are doing (not allowing him to leave the campus) is not the right form of protest”.

The students were initially adamant and insisted on not allowing the governor and the minister leave the campus.

“The situation was turning agnigarbha (explosive). So we told the students they should allow the governor to leave the campus,” said one of the teachers.

A second-year postgraduate student who was agitating in front of the governor’s car said they agreed to lift the agitation after agreeing with the teachers’ argument.