Is Mamata thinking truce with Centre over Alapan?

Chapter over now, says chief minister as her adviser gets an office in Salt Lake, not Nabanna 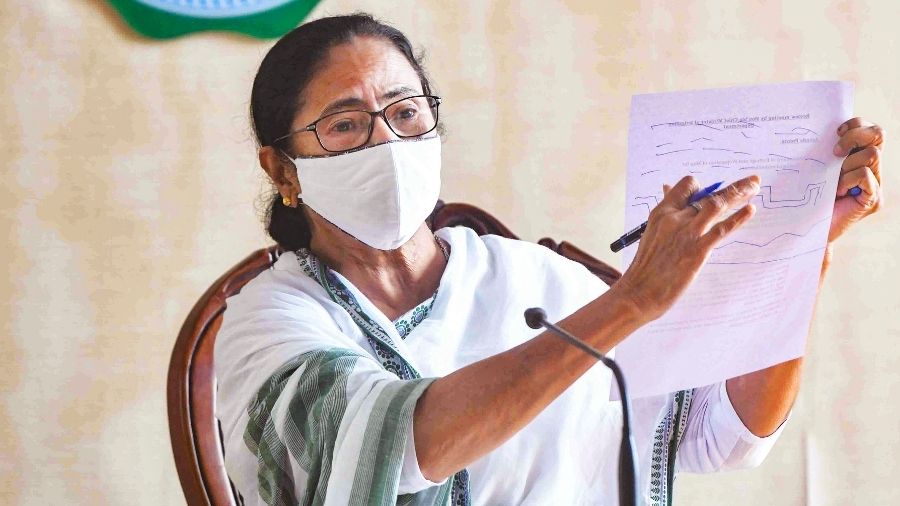 Chief minister Mamata Banerjee dismissed questions on former chief secretary Alapan Bandyopadhyay on Wednesday, fuelling speculation on whether she was calling a truce with the Centre, at least for now.

“Case is over now, chapter is over now,” Mamata said during a press conference at the state administrative headquarters in the afternoon.

Bandopadhyay, who has been appointed chief adviser to Mamata, has been given an office at the Administrative Training Institute (ATI) in Salt Lake, as per an order issued on Tuesday mentioning that he will hold additional charge as DG at ATI.

Salt Lake, in the eastern part of the city, is at a distance from Howrah across the river in the west that hosts Nabanna, the state's administrative headquarters where the chief minister and her key officers have their offices.That the chief minister's adviser would not have his office at Nabanna raises questions on how effective Bandopadhyay would be in his new role.

Bandyopadhyay, however, did attend a meeting at Nabanna on cyclone relief on Wednesday.

“It is surprising that the chief adviser to the chief minister would not be in the same office. This begs the question how far serious the state is about seeking his advise,” said a retired bureaucrat who has served in Bengal.

According to sources, Bandyopadhyay’s continued presence at the state administrative headquarters at Nabanna could undermine the role of current chief secretary Hari Krishna Dwivedi, which the chief minister was keen to avoid. Also, Dwivedi shares an excellent rapport with Gautam Sanyal, the principal secretary to Mamata.

“CM feels these two officers would be able to work in tandem and any third person could create problems,” claimed a source.

Bandopadhyay was served a notice by the Centre under the Disaster Management Act, seeking an explanation for skipping a review meeting called by Prime Minister Narendra Modi last Friday at Kalaikunda.

Bandyopadhyay, then chief secretary, had left the venue along with Mamata without attending the meet. Hours later, the Department of Personnel and Training (DoPT) had recalled him to Delhi without consulting the state government, a move the sparked the latest standoff between the Centre and Bengal.

Bandyopadhyay, appointed chief adviser to the chief minister for three years post his retirement on Monday evening, must reply to the notice by Thursday. Troubles for the former bureaucrat are unlikely to be over soon as  DoPT can launch proceedings against any officer till four years from retirement.

Trinamul sources, however, claimed that Mamata did not want to pursue the issue further as she had established herself as the most vocal Opposition chief minister against Modi. “She has made her point. There is no need for her to carry on with this issue any further. That is why she said, 'the chapter is over',” said a senior Trinamul leader.

Also, the sword of central agencies was still hanging over key leaders of her party and also some of her family members. Prior to the Assembly polls, CBI had summoned Rujira Banerjee, the wife of Trinamul Diamond Harbour MP and Mamata’s nephew Abhishek, and her sister Menaka Gambhir in a coal mining scam.

After the poll results, CBI arrested three Trinamul leaders, including two ministers, and a former party leader, in connection with the Narada sting operation.

“Since there are allegations, a probe will be conducted. Any such move brings a bad name to the party. Probes can damage her national political ambition. Though we can always talk about political vendetta, it may not work every time,” a Trinamul insider said.