Nadda told party workers at a closed-door meeting in the evening to leave no stone unturned to ensure the defeat of Mamata, the sitting MLA of the constituency 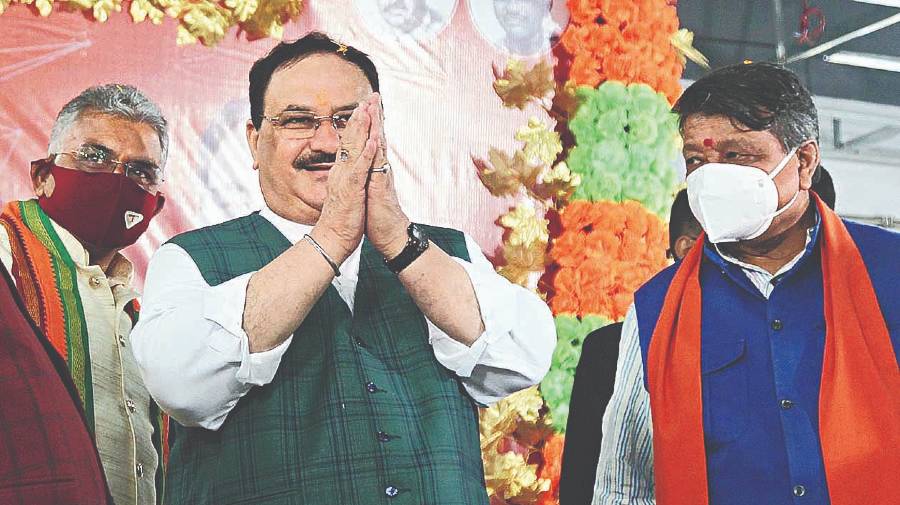 Nadda during the inauguration of the BJP’s election office in Calcutta on Wednesday
Telegraph Picture
Arkamoy Datta Majumdar   |   Calcutta   |   Published 10.12.20, 03:45 AM

The BJP has zeroed in on Bhowanipore, the home turf of Mamata Banerjee, as the seat to win in Bengal ‑ and national president J.P. Nadda learnt first-hand on Wednesday the hard work that remains to be done to accomplish the mission.

Nadda told party workers at a  closed-door meeting in the evening to leave no stone unturned to ensure the defeat of Mamata, the sitting MLA of the constituency. If Bhowanipore can be won, snatching power in the state will become easy, a source quoted Nadda as telling the party workers.

Earlier in the day, Nadda’s outreach was marred by complaints from several residents of a Bhowanipore neighbourhood. In a slum located on Girish Mukherjee Road, at least one of the residents expressed displeasure on record. “He came and went like a thakur (God),” said Rani Halder.

“There are 40 families in this slum. Why did he visit only three families? He should have come to at least a few more of us…. None of us got a chance to tell him about our problems. We thought that is what he was here for,” she added.

Bimala Jana, whose family Nadda did visit, virtually echoed Halder: “Our men have lost jobs in the lockdown. I wanted to tell him about it, but couldn’t.”

Rubbing salt into the wound, Halder contrasted it with a visit from her local MLA about a year and a half ago. “When Didi (Mamata) came here to find out about our problems, she stood with us on the road and spoke to each and every one of us. She gave us a patient hearing. That programme was so much better organised,” said the Bhowanipore resident.