The police allowed the pool car driver, Mohammad Sahil, 20, to drop the children to school 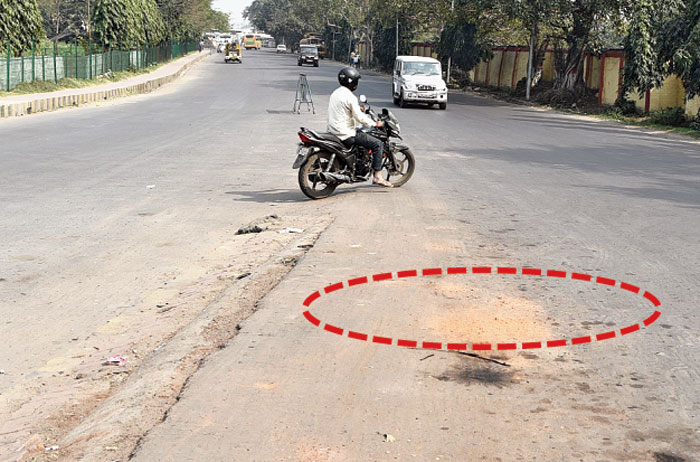 The spot on Canal East Road in Ultadanga where the pool car hit the scooter on Monday morning
The Telegraph picture
Our Special Correspondent   |   Calcutta   |   Published 17.02.20, 08:30 PM

A 23-year-old vehicle that was illegally plying as a commercial carrier ferrying students to school crashed into a scooter on Canal East Road in Ultadanga on Monday morning.

The scooterist and the pillion rider, who are a couple, were injured.

Police sources quoted transport department officials as saying that the vehicle that had been ferrying students, a Tata Sumo, was registered as a private vehicle in 1997.

Had it been registered as a commercial vehicle, it would have lost the right to ply in Calcutta several years ago.

Calcutta High Court had in 2008 banned all commercial vehicles aged 15 years or older in the Calcutta Metropolitan Area (CMA) in an attempt to reduce air pollution caused by tailpipe emission.

The CMA covers the areas under the Calcutta Municipal Corporation and the civic bodies in Howrah, Hooghly, North and South 24-Parganas and a part of Nadia.

The fitness certificate of the 23-year-old Tata Sumo is valid till June 11, 2022, traffic police officers said.

“It is apparent the vehicle has managed to survive and renew its documents because it is registered as a private vehicle. It was being illegally used for a commercial purpose,” an officer said.

The vehicle, ferrying around 10 schoolchildren, was plying down Canal East Road towards Calcutta railway station around 11am when a scooter travelling in the same direction allegedly made a U-turn in front of the Sumo.

“Eyewitnesses said the pool car, which was travelling at a high speed, rammed into the scooter as soon as it made the U-turn,” an officer of Ultadanga police station said. “The children in the pool car got scared and started crying. No one was injured.”

The police allowed the pool car driver, Mohammad Sahil, 20, to drop the children to school. He was arrested and the vehicle seized later in the day.

A case has been started based on a complaint filed by the scooterist, Abhijit Mandal. He and his wife, Mamata, who was riding pillion, were wearing helmets, the police said.

The couple suffered leg injuries. They were taken to RG Kar hospital, from where they were discharged after treatment. Officers said they were trying to contact the owner of the vehicle and verify the records.