Hurdle to bridge work in Murshidabad 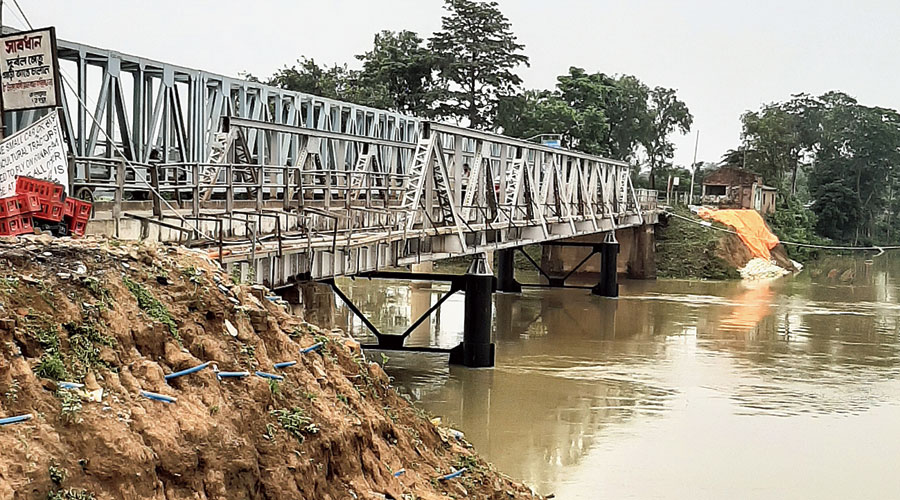 A bridge project launched by Mamata Banerjee in Murshidabad has met with a hurdle as three landowners of accused the administration of forcibly acquiring their plots at meagre rates.

The district administration had served a notice to acquire a 47 decimal plot at Ranagram village to build the approach road to the bridge over the Dwarka river at Kandi.

A pause button had to be pressed on the construction of the bridge as the owners of the 47 decimal plot — Baku Das, Mangal Das and Dipika Das — moved Calcutta High Court in March and then barricaded the area to prevent the work.

“We are refusing to sell our land or remove the barricades until the government-stipulated standard rate of Rs 1.5 lakh per a decimal land in this area is met by the administration,” said Mangal, adding that they felt “doubly wronged” because contractors had started the work on their land in January.

According to him, the trio have been protesting the construction without permission on their land for months and moved the high court in mid-March.

“The verdict is pending. But in the meanwhile, we were summoned to the BDO (block development officer) office in July and arm-twisted by the SDO (subdivisional officer) and IC into signing an NOC (no-objection certificate) at less rates,” said Mangal.

Baku, another land owner, said the district officials had offered to pay Rs 8,700 per decimal in January and then revised the offer to Rs 36,000 in July after learning of the high court move. “We have no objection to the sale of our land to the government for developmental purposes, but we demand fair rates. What we were offered at best was not even a third of that,” said Baku.

Although the objections were raised by just three people, it has come as a major embarrassment for the Trinamul Congress, which rose to power in 2011 riding the wave of support that Mamata had got for opposing forcible land acquisition in Singur and Nandigram.

“Our party came to power on the emotions of people who were upset at the CPM for doing similar things in Singur. It is outrageous for us to be in a similar situation,” a senior Trinamul worker in Kandi said on condition of anonymity.

Sources said the foundation stone of the new Ranagram bridge had been laid by the chief minister on November 20 last year via video conference from Sagardighi. The bridge was slated to replace a parallel British-era bridge that had been closed to heavy vehicles in 2018 after a PWD inspection deemed it weakened. As a result, the majority of heavy-vehicle traffic between Murshidabad and Birbhum and Burdwan has been disrupted.

Tenders for the new bridge were floated in December and the construction started in January.

Asked about the acquisition hurdle, district magistrate J.P. Meena said the PWD was “actively looking into the matter”.

“The initial valuation was lower than what it should have been. So, we are waiting for more funds from the state purse,” he said.

Baku and Mangal said they had cordoned off their land with bamboo poles during the lockdown to prevent “further illegal construction”. “I submitted deputations and ample notice to the DM, DLRO, SDO and BDO but got no proper response,” said Mangal.