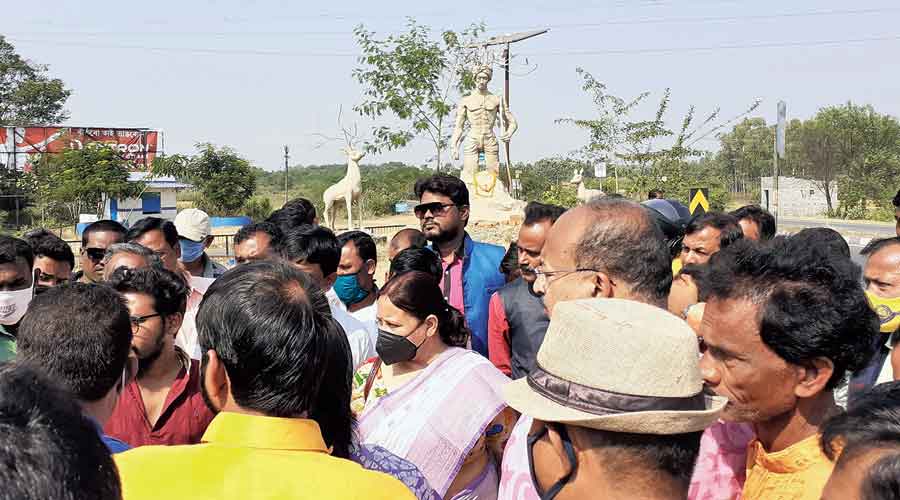 Leaders of Trinamul and tribal outfits during a search for the site of Birsa Munda’s statue in Bankura on Monday
Rupesh Khan
Snehamoy Chakraborty   |   Bankura   |   Published 17.11.20, 05:08 AM

Representatives of adivasi outfits in Bankura, backed by local Trinamul leadership, on Monday identified three plots, one of which they plan to use to set up a statue of tribal icon Birsa Munda in the next few months.

The tribal freedom fighter, religious leader and folk hero has suddenly assumed the centrestage in the battle between Trinamul and the BJP since Union home minister Amit Shah paid floral tributes to the statue of an anonymous tribal hunter, which the BJP had identified as the statue of Munda.

Although the faux pas by Shah drew criticism from tribal organisations, the state BJP put up a brave face and party president Dilip Ghosh said — much to the dismay of tribal organisations — that the party considered the statue of the anonymous hunter as that of the tribal icon because Shah had paid floral tributes to it.

“The BJP has inflicted so much of insult on the tribal hero.... We want to undo the damage for the sake of the pride of the tribal people. Today, we went with tribal representatives and spotted three plots, where we plan to set up a statue,” said Shyamal Santra, a minister of state and Trinamul’s Bankura district president.

Santra accompanied the team of the tribal people.

According to him, the statue will be set up in “a few months” as the matter has become a priority for local people. All the three plots, which were inspected on Monday, are within 100 meters of the statue of the anonymous hunter.

Multiple sources in the ruling party and tribal organisations said while the government would donate land for the statue, local tribal outfits would collect funds for a 20-feet statue of Munda.

“The statue would be so tall that the BJP leaders would not miss it... They may be outsiders, but when they come to this part of Bengal, they should know Birsa Munda,” Santra added.

The statue saga, however, is unlikely to stop for the time being as BJP MP from Bankura, Subhas Sarkar, visited the site of the anonymous tribal hunter’s statue on Sunday and paid floral tributes on the birth anniversary of the tribal icon. Repeating Ghosh’s stand, he asserted that the BJP considered the anonymous tribal hunter’s statue as that of Munda.

Born on November 15, 1875, at Uihatu village, now located in Ranchi, Jharkhand, Bhagwan Birsa Munda, as he is called, is among the foremost tribal icons.

Several people from the tribal community this correspondent spoke to said that they would be happy if a statue of Birsa Munda was set up as they think their hero was insulted when Shah paid tribute to an anonymous hunter.

“The ignorance was so insulting for all of us... Then, they stuck to their stand and claimed it to be the statue of our icon. It is unfortunate that our hero Bhagwan Birsa Munda is being repeatedly insulted for the sake of politics. It is better to set up a statue of him at the place. So, I came here,” said Samir Munda, a representative of Munda community people.

Local BJP leaders, though embarrassed because of the faux pas, have not admitted their mistake till now. On Monday, they blamed Trinamul for using the issue for political gains.

“Everyone knows that Trinamul never cared for tribal people... Now, they are trying to play with tribal sentiment ahead of the Assembly polls,” said Vivekananda Patra, the Bankura district  BJP president.

The local Trinamul leaders found the tribal outfits by their side in the statue saga. Dhananjay Sardar, a central committee member of the Bharatiyo Adivasi Bhumij Samaj, said: “The anonymous hunter’s statue can’t be Birsa Munda’s... I went there on Monday and welcomed the move to set up a statue of our icon.”