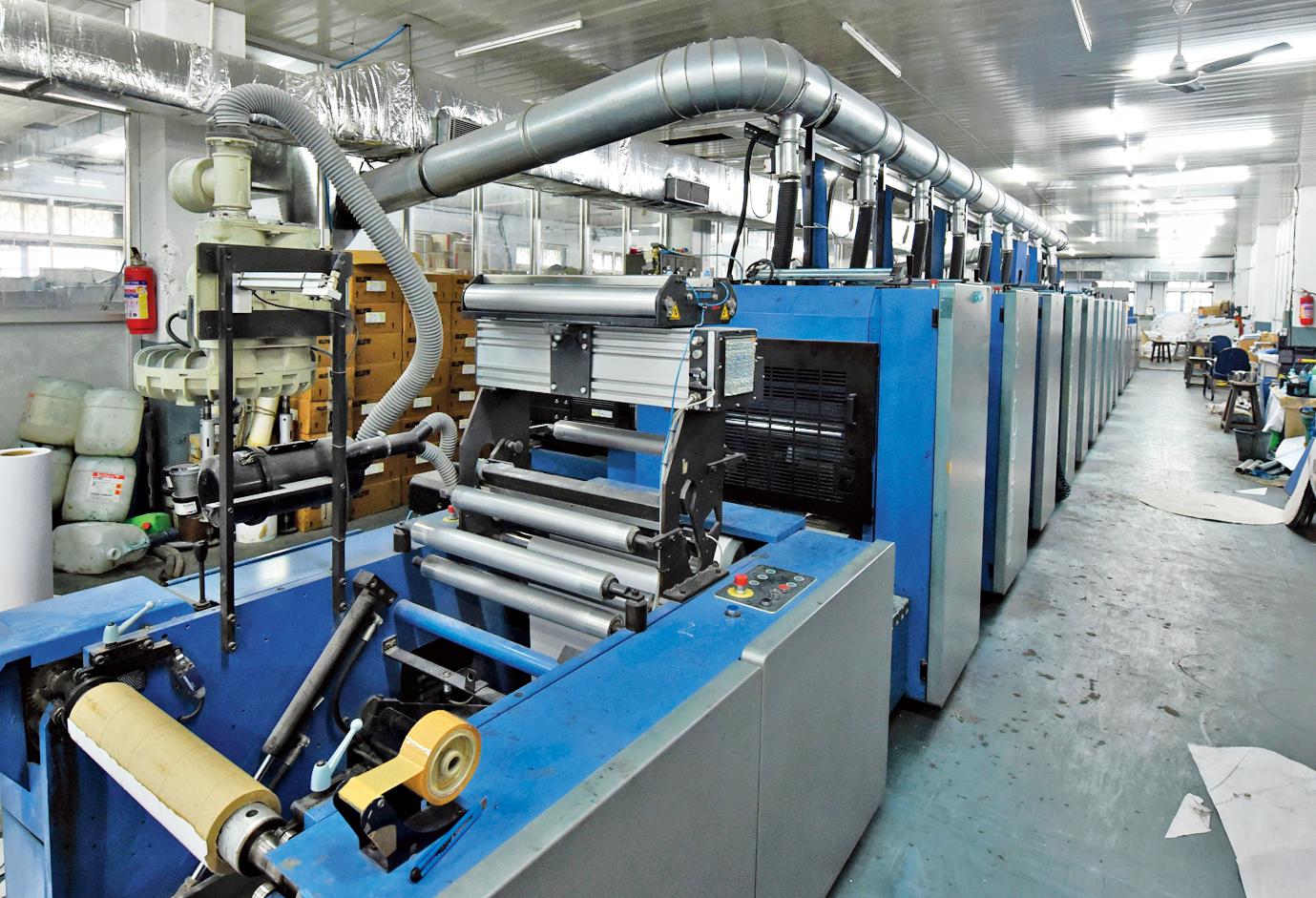 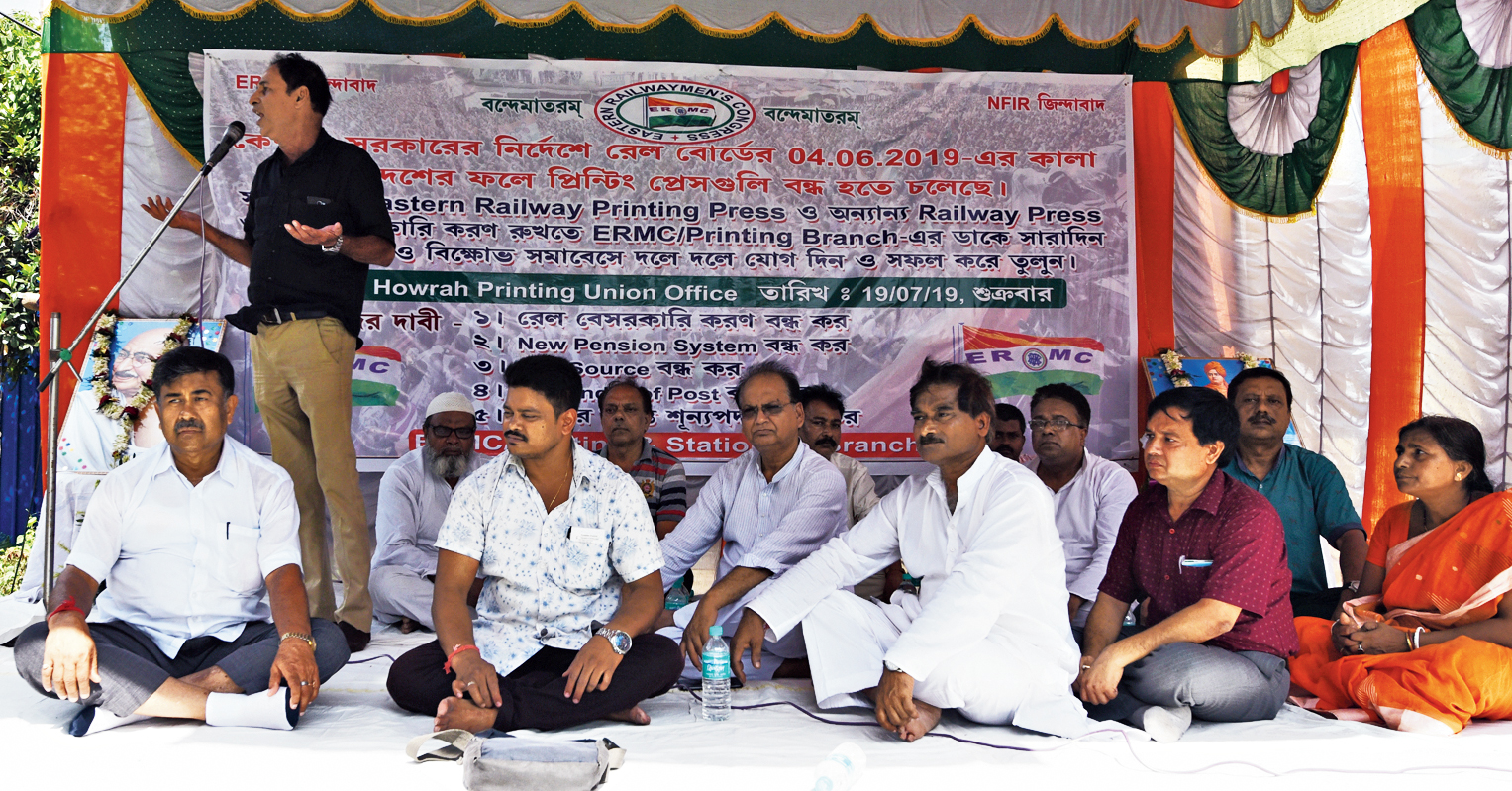 A union leader speaks during the demonstration on Friday.
Picture by Pradip Sanyal

The railways’ decision to shut down a 164-year-old press in Howrah that prints paper tickets, challans and a host of other stationery has triggered a trade union unrest.

The decision is irreversible and in keeping with the policy of outsourcing non-core activities and concentrating on core jobs such as running trains and maintaining rolling stock, a rail official said on Friday.

On June 4, the Railway Board’s executive director had written to the general managers of all railway zones and production units about the decision to shut down the printing presses in Mumbai, Howrah, Delhi, Chennai and Secunderabad by March 2020.

Printing of reserved and unreserved tickets should be outsourced till the entire ticketing system is digitised, the executive director said in his letter. Press employees “should be redeployed in safety categories”.

The Eastern Railway printing press, which started its journey in 1855, is on the campus of the senior material manager’s depot on Mukhram Kanoria Road, less than a kilometre from Howrah station.

On Friday, the Congress-backed Eastern Railwaymen’s Congress (ERMC) held a demonstration on the campus against the closure.

One speaker after another slammed the Centre for what they called “an arbitrary decision” to shut down the press and outsource printing activities to private players. A printing machine worth more than Rs 10 crore was bought from a Spanish company, Rotatek, and installed at the unit in 2014, according to protesters.

They alleged the decision to close down the press was a ploy to hand over railway assets to private players.

The June 4 letter directed the principal chief materials managers of zonal railways to “dispose all usable printing and other machines in the market on second-hand basis instead of selling as scrap”. The Rotatek machine “maybe considered for selling to OEM/private printers”.

These printing presses, an integral part of the railways till a few years ago, have been earmarked since the carrier started focussing on digitisation and paperless tickets.

The principal chief materials manager of Eastern Railway, S. Barui, said the decision to close down the press was a step in the direction of complete digitisation. “We are trying to reduce inventory costs and heading towards an online paperless system.”

“The railways will focus only on core activities like running trains, maintaining tracks and rolling stock. All other activities will be outsourced,” a rail official in Delhi said.

The official cited how the catering, tourism and online ticketing business has been outsourced to the Indian Railways Catering and Tourism Corporation. Activities like housekeeping on trains and station cleanliness, too, have been outsourced, he said.

Union leaders in Calcutta said bringing in private players would be suicidal. “Private players won’t cater to the railways only. They will set their own terms and conditions and only care for profit. We will fight tooth and nail to oppose this,” Binod Sharma, the zonal president of ERMC, said.

Sharma pointed out how the press catered to several zonal railways — Eastern, South Eastern, North Frontier and East Coast Railways among them. “More than 2.5 milion tickets are printed every day from this unit. The annual production volume for 2018-19 was more than 420 million tickets.”

The press supplies tickets to Calcutta Metro as well. The card tickets issued in place of tokens during the Puja are printed at the Howrah press.

Biswarup Mukhopadhyay, the branch secretary of ERMC, said all railway unions were against the decision to shut down the press.

Mukhopadhyay pointed out how the railways had invested Rs 100 crore in 2014 to modernise the five presses. “What was the need for spending so much if the units would not continue?”

He said the railways should opt for off-the-shelf purchase to cut down on overhead costs. “There was a time when railway workshops manufactured nuts and bolts. If a single piece costs Rs 2 in the market, its manufacturing cost in the workshop would be Rs 10.”

Railways unions in Mumbai protested the closure of the press in Byculla. The 124-year-old unit was the hub of printing activity for the Great Indian Peninsular Railway, which is now know as the Central Railway.