History of Persian, and cosmopolitan India

Several vignettes of Indian history were discussed, by over 500 participants from across the country and beyond, over the past two days at a seminar in Calcutta 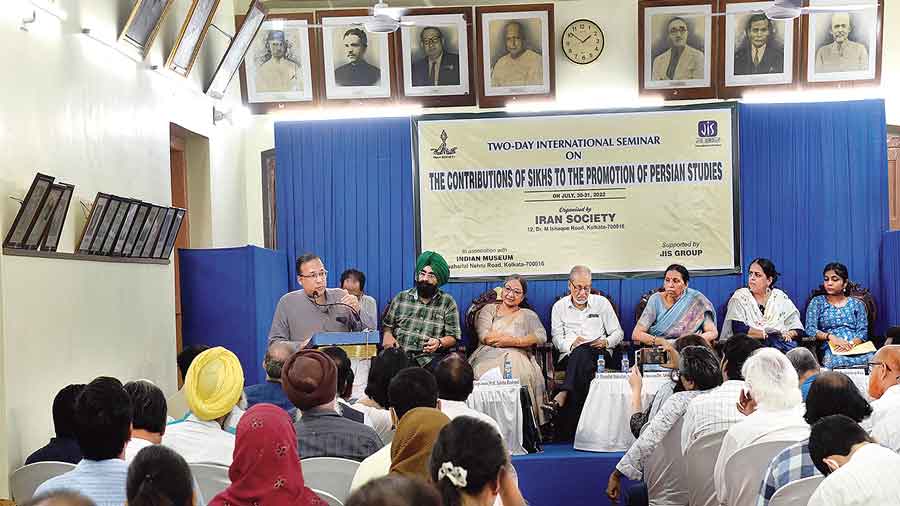 Guru Gobind Singh, the tenth Sikh Guru, wrote to Aurangzeb about his moral victory over the Mughal emperor in the 1705 Battle of Chamkaur in the same language that Raja Rammohan Roy used in a newspaper he launched 117 years later.

Several such vignettes of Indian history were discussed, by over 500 participants from across the country and beyond, over the past two days at a seminar here on the theme “The contribution of Sikhs to the promotion of Persian studies”.

The event was organised by Iran Society, Calcutta, which promotes the study of the Persian language and culture.Academics presented 18-odd papers explaining the history of the Persian language — the subcontinent’s lingua franca till the British conquest — and its impact on the region’s culture, society and languages like Hindi and Bengali, while challenging the saffron camp’s “one country, one religion, one language” agenda for today’s India.

“We are forced to move towards homogenisation with the pursuit of this one country, one religion and one language agenda in contemporary India,” Amit Dey, professor of medieval and modern Indian history, Calcutta University, told The Telegraph on the sidelines of the seminar.

“This was, however, not the case in medieval India, which was eclectic and cosmopolitan as there was a pluralistic ambience. To learn that period’s history, we must know Persian.”

Most of the speakers said that Persian, brought to the subcontinent by Persophile Central Asians in the 12th century, played a role comparable to that of English in modern India.Most speakers, including Saleha Rasheed of the University of Allahabad, Ehsanollah Shokrollahi, director of the Persian Research Centre, New Delhi, and Fuad Halim, council member, Iran Society, stressed the need to study Persian if one wanted to understand the subcontinent’s history and pluralistic past.

Some of the speakers, however, were unsure whether present-day India would encourage the pursuit of Persian, which was the language of administration and high culture across the subcontinent for hundreds of years.

“You can see that the names of railway stations written in Urdu on platforms are replaced with Sanskrit. Then there are attempts to change the history syllabus to exclude the Mughals and vilify Aurangzeb, referring to the Sikh-Mughal conflict,” Dey said.

Halim and his wife Saira took the argument forward and expressed concern at the attempts to link languages like Persian and Urdu with Muslims although historical facts told a different story.

“One language cannot be of one religion; it’s for all,” said the Calcuttan, while explaining how Sikh families have for generations been cherishing the Persian poetry of Amir Khusrau, Sufi singer, poet and scholar.

Halim said: “My late father Hashim Abdul Halim (former Speaker of the Bengal Assembly) had toyed with the idea of a seminar on this subject as the Sikhs have contributed greatly to the Persian language. We did a lot of research at the society and finally put this seminar together.”

Although the Sikh-Mughal conflict of medieval times has assumed importance in current Indian politics, with the saffron camp referring to it in election campaigns, Halim and several other speakers reminded the audience that religion had very little to do with that conflict.

“They were due to political or economic reasons…. One also needs to remember historical facts, like how Sher Mohammad Khan, the Nawab of Malerkotla, who was a supporter of Aurangzeb, had opposed the cruelty meted out to the sons of Guru Gobind Singh,” Halim said.

Rasheed, who teaches Persian, regretted the decline in student interest in the language and the Centre’s apathy to the subject.

“If we don’t pursue this language, we will have to depend on secondary sources to understand the history of this period and there are dangers in such interpretations,” she said, alluding to the calls to erase the Mughal era from school textbooks.

Ehsanollah, who works with the Iranian embassy in Delhi, stressed the importance of the Persian language to understanding India’s centuries-old relationship with Iran, one of New Delhi’s all-weather friends in the Persian Gulf.