Foresters said animals which reside in higher altitudes of 12,000 feet are recently being frequently spotted in the plains 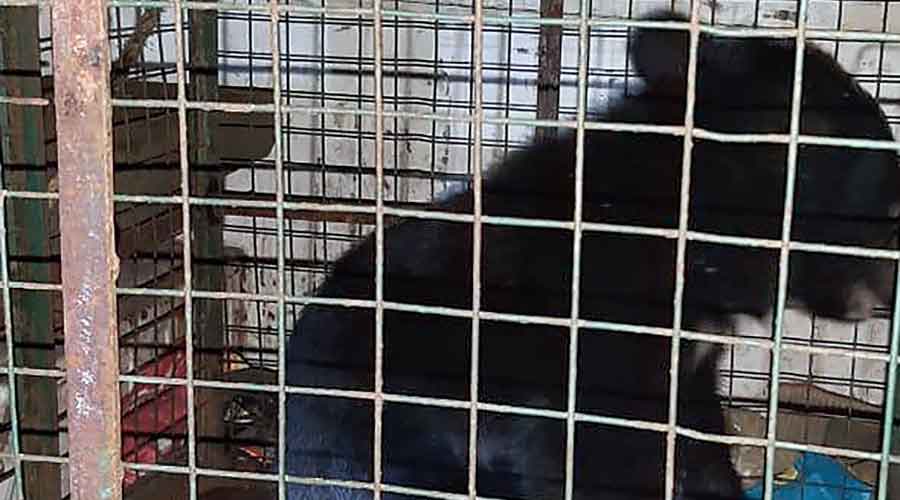 A Himalayan black bear was rescued from the banks of the Rydak river in Alipurduar district on Wednesday night and released into the wild on Thursday morning.

Sources said some people spotted the black bear, aged around two years, along the river bed under the Kumargram range of Buxa Tiger Reserve (BTR) on Wednesday evening.

Although foresters from Kumargram range, who rushed to the spot, carried tranquillisers, they decided against using them. Sri Harish, deputy field director, BTR (east), explained why. “There have been instances of young bears facing problems on being tranquilised. This is why we decided to trap it in a cage.”

However, trapping the animal was not easy owing to the terrain and the failing light.

“The animal could be trapped with a net after a four-hour effort,” said a source. After a medical check-up, the bear was released into the wild on Thursday morning.

Foresters said Himalayan black bears which reside in higher altitudes of 12,000 feet are recently being frequently spotted in the plains.

Ujjwal Ghosh, additional principal chief conservator of forest, said: “It is true that this year Himalayan black bears are being found in the Dooars region more frequently.”

Foresters looking into a number of probable reasons for the frequent sighting of Himalayan black bears in the plains are planning a survey to estimate the bear population.

Recently, several bears have been sighted in Kalimpong, Darjeeling, the Dooars and the neighbouring state of Sikkim.

While most have been rescued by the forest departments of both states and released in the wild, one of the bears, which strayed into a tea estate in Jalpaiguri and killed an onlooker who ventured too close, was beaten to death by some people in the crowd.

Officials said initial observation suggests changes in climate, increase in population, food shortage and easy availability of food in urban centres could be reasons for the straying of bears in lower regions.