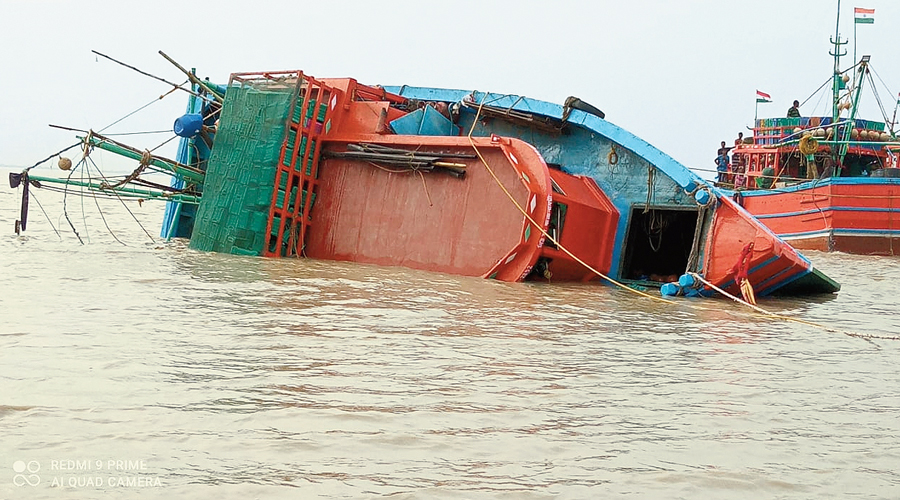 The trawler for hilsa fishing that overturned late on Saturday night in the Hooghly, off Nandigram in East Midnapore, prompting NDRF personnel to search for the three missing fishermen on Sunday.
Telegraph picture
Anshuman Phadikar   |   Nandigram(Bengal)   |   Published 14.06.21, 01:57 AM

A trawler driver drowned and three fishermen went missing late on Saturday night when their vessel, moored at Gangamela ghat on river Hooghly in East Midnapore’s Nandigram, capsized during a sudden high tide.

The crew of 14 aboard the vessel, Maa Karunamoyee, had been shifting 14 barrels of diesel, each of 200-litre capacity, to fuel the trawler for a new season of hilsa fishing from June 15. Sources said the barrels caused the vessel to lose balance.

Nine men on board jumped out and swam to safety, one more was rescued. But trawler driver Pradip Manna, drowned. Three fishermen, Rupesh Khanra, Kashinath Sheeth and Bistupada Maity, have eluded rescue teams so far.

Civil defence and coast guard personnel were pressed into rescue operations at daybreak on Sunday, but the search for the three missing fishermen was unsuccessful till sundown.

One of the rescue personnel said that the lifeless body of the driver, Manna, was recovered soon after the incident. The body was then sent to Contai subdivisional hospital in East Midnapore on Sunday for a post mortem.

District authorities explained that the fishermen, all of whom hailed from Marisda in Contai, had been making preparations to start fishing, particularly hilsa, starting Monday night.

“Every year, June 15 marks the yearly cessation of fishing restrictions that start in mid-April in order to allow various breeds of fish, particularly the hilsa, to spawn,” said a district official.

Sources added that fishermen look forward to June 15 but this time mishap struck before that.

“We have had no luck in locating the three missing youths yet but we are trying our best,” said Biswas.

“Prima facie, it seems the imbalance caused by the barrels of diesel may have been a contributing factor (to the capsizing of the vessel),” he added.

Fishing trawlers often remain at sea for days on end before returning to shore with their catch, an equation in which the size of the catch must be able to offset the amount of fuel spent.

The surviving fishermen of the Maa Karunamoyee team are upset and anxious.

Survivor Dipak Gyne said most of them had begun to unwind after dinner when a ferocious wave struck.“At that time, most of the diesel barrels were to one side, so we knew immediately that we had to jump out and swim,” he said.

Added Gurupada Sit, another survivor: “We had high hopes for 2021 as the last two years have been bad seasons for hilsa, but this (the mishap) has been an unimaginable setback.”