Hill parties gear up for GTA polls, minus Bimal Gurung

Elections to the Gorkhaland Territorial Administration have been due since 2017 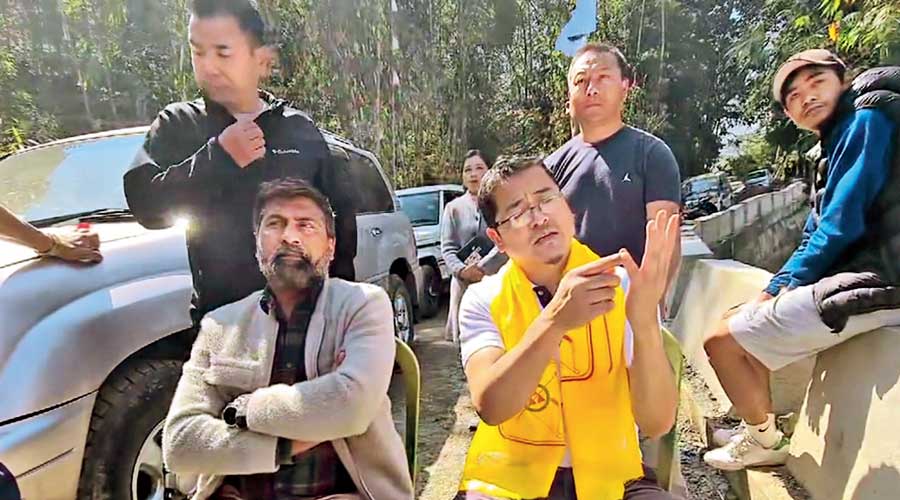 Ajay Edwards visits Takdah, a locality in the Darjeeling hills, to meet his supporters on Wednesday
Telegraph Picture
Vivek Chhetri   |   Darjeeling   |   Published 10.03.22, 03:14 AM

Elections to the GTA have been due since 2017.

On Wednesday, Ajoy Edwards, president of the three-month-old Hamro Party that won the recent Darjeeling civic polls, went to the Takdah tea garden-Dabaipani area to meet new supporters. Edwards’s party is set to form the board at the Darjeeling municipality on March 17. “We are expecting the GTA elections by June and we have little time,” said Edwards, whose party won 18 of the 32 wards.

The six-month-old Bharatiya Gorkha Prajatantrik Morcha (BGPM) led by Anit Thapa also organised a meeting with the people of Rimbick. The meeting is seen as fieldwork for the GTA polls.

The BGPM won in nine wards of Darjeeling to become the second largest party in the civic elections.

Thapa, who briefly headed a faction of the Gorkha Janmukti Morcha, is now trying to create a separate space for his new party.

While the Hamro Party and BGPM is reporting gains in their support base every passing day, the scene is different in the Gurung camp.

Recently, its youth wing president Prakash Gurung and spokesperson Binita Roka tendered their resignation, saying their thoughts were not in sync with the way the party is functioning at the moment.

During this Darjeeling civic polls, the party managed to win only three seats. In 2017, Gurung’s party had swept Darjeeling, Kalimpong and Kurseong municipal elections.

Morcha party sources said the party leadership ideally would want the panchayat elections to be held before the GTA elections. Gurung’s party wants the state government to work out a “permanent political solution” and hold election to a new body that they expect to replace the existing GTA.

Gurung, whose Morcha is an ally of Trinamul, has also expressed his desire not to contest the GTA elections.

However, on Tuesday, Mamata Banerjee asserted that GTA elections would be held soon.

“Next, we will go for GTA election also but before that I will sit with all... We want to see that Darjeeling smiles,” Mamata had said during the party’s organisation meeting in Calcutta. She also struck down the Trinamul hill leaders’ proposal to go alone in future hill elections.