One of the pupils stuck in Ukraine says he couldn’t afford to pay Rs 49,000 for Delhi flight 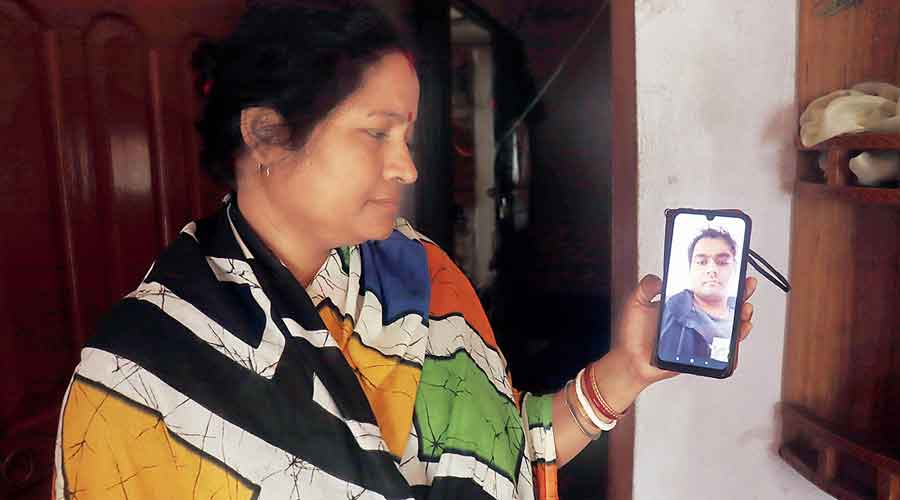 Mother of Arambagh resident Debarghya Pore, who is stranded in Ukraine, shows his picture on Friday.
Ananda Adhikari
Snehamoy Chakraborty   |   Bolpur(Birbhum)   |   Published 26.02.22, 01:57 AM

Several medical students from Bengal who are trapped in Ukraine were unable to board flights to India before Russia started invasion on Thursday morning because of a “two-to-three-fold spike” in airfares.

Preliminary reports suggest that the students were not prepared for the sudden spike in the airfares caused by the war and most of them are stranded either at hostels. A few have reportedly been sheltered at the Indian embassy.

“The last flight that I could have boarded was on February 22. The price of a ticket to Delhi shot up to Rs 49,000, which is double the normal price. I had no money and have had to put up at my friends’ student accommodations,” said Arghya Majhi, a third-year medical student at Kyiv Medical University in the capital of Ukraine, speaking over the telephone on Friday.

Arghya, a resident of Raidighi in South 24-Parganas, had been living in a rented accommodation in Kyiv, along with three other medical students from East Burdwan, East Midnapore and Hooghly.

“We have purchased food to last us for seven days. We don’t know what will happen after that. We can hear the sounds of explosions from our flat. We have already contacted the Indian embassy and are awaiting their reply,” added Arghya.

Like Arghya, there are several others from Bengal in a similar predicament. Medical student Debarghya Pore, from Hooghly’s Arambagh, remains stranded in Ukraine because of prohibitively high airfares.

“At the last hour before the attack was rolled out, a one-way flight to Delhi was costing Rs 80,000 and it was beyond my capacity to pay. So, I could not return home and am staying with three of my friends from Uttar Pradesh,” said Debarghya, speaking from near the Poland border.

Debarghya and his friends on Friday booked a cab and reached the Ukraine-Poland border but were not allowed to cross over in the absence of a private vehicle.

“We heard that entreaties to Polish or Hungarian troops on the border roads would likely result in us being successfully evacuated to those countries. But when we arrived at the Polish border, we were informed that it was closed. Now we are returning to Lviv, where I am a medical student,” he said.

Krishna Porey, mother of the student, said she wanted the safe return of her son who went to Ukraine last November to study medicine.

As many as 400 students, who had been studying in different parts of Ukraine but mostly in Kyiv, have reportedly been put up in a school building under the supervision of the Indian embassy. Most of them are reported to be short of funds and have been compelled to take shelter at safe-homes of the Indian embassy for food. Reports suggest that almost all banks and ATMs are running out of cash.

Two brothers from East Burdwan’s Kalna are among these students.

“We have no money. The hostel authorities of our management college asked us to vacate the property as all of the staff left in a panic. We had no other option other than to find a shelter, as we are running out of money. Now we are at the Indian embassy’s safe home,” said Biswajit Haldar, a second-year undergraduate management student.

Durgapur resident Neha Khan, a third-year medical student at Ivano Frankivsk, is “scared and stuck”. Her parents, back in Durgapur, echoed a similar fear for their daughter.

“We are in regular touch with our daughter but she is naturally scared because of the heavy bombing. Indian embassy officials have contacted us and have assured us that our daughter will be brought back to India soon. But we are still very worried,” said father Feroz Khan.

Several of the stranded students have reportedly appealed to the Indian government for transportation to the Romanian or Hungarian borders, in line with a reported advisory to students regarding the same.

Speaking to The Telegraph from Dnipropetrovsk in Ukraine, Arpan Mondal, a medical student from Basirhat, said: “The Indian embassy in Kyiv has suggested alternative routes closer to Romania and Hungary, promising early evacuation from there, but reaching those destinations is difficult in the absence of any transport services.”

Arpan, who is a third semester student of medicine at a medical college in Dnipropetrovsk, added: “The Indian embassy has been maintaining close contact with us and has also advised us to reach the border areas of Hungary and Romania. But we are stranded in an underground shelter beneath a cafeteria as we couldn't arrange for any vehicles to take us there.... We tried to hire one bus, but the operator demanded $200, which is around Rs 15,000. Such an amount is difficult to manage and ATMs are out of service anyway. We want to go back home at the earliest but without the Indian government’s support that won’t be possible at all.”