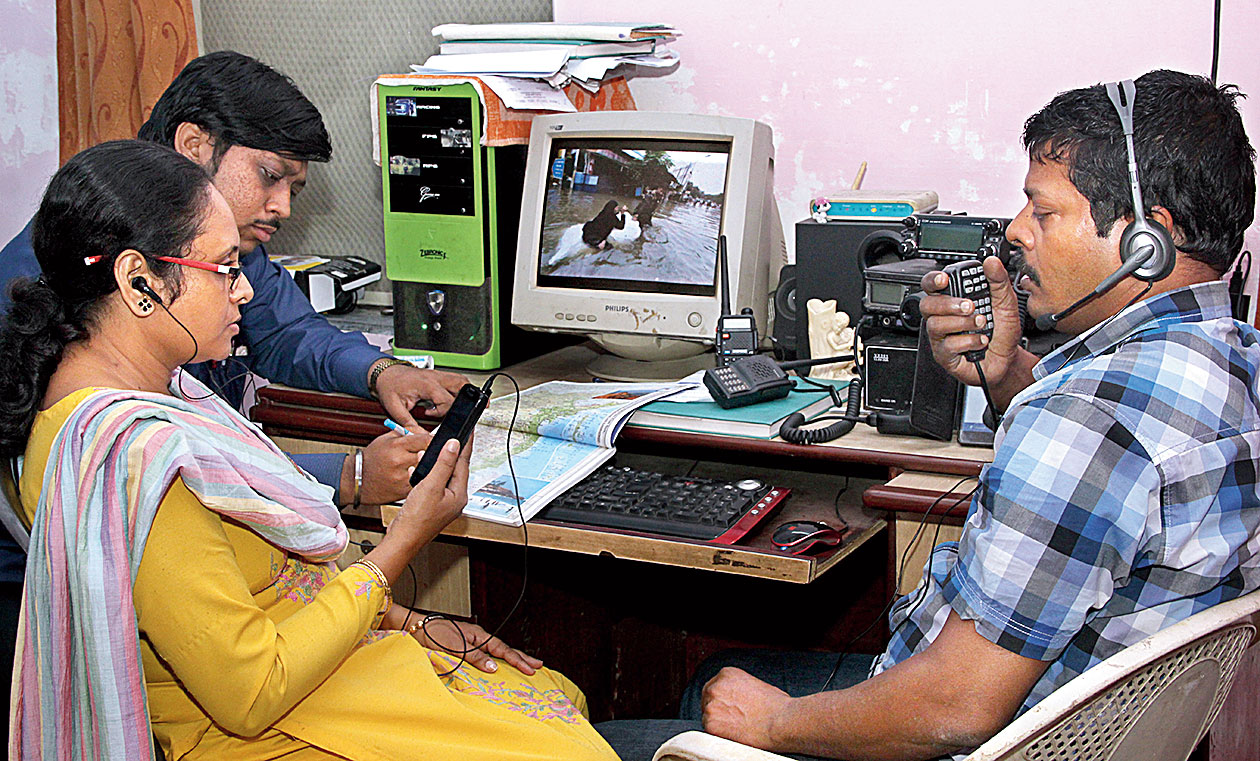 Where all communication fails, ham radios come to people’s rescue, says Ambarish Nag Biswas, the secretary and founder of the West Bengal Radio Club. Ham radio is a term for amateur radio. And the club is a collective of amateur radio operators. It has over 200 members — students, homemakers, lawyers, teachers, doctors, IT professionals… The late Rajiv Gandhi used to be a huge enthusiast. Biswas, too, has been one for over 26 years. “It is a global hobby,” says the 49 year old. “Sitting here, I can talk to people in Germany, America, Japan, wherever,” he adds.

Biswas’s Sodepur home, on the outskirts of Calcutta, doubles as the club office. His daughter, Sraboni, enters with a walkie-talkie in hand. At 18, she is one of the youngest ham radio operators in India. Both father and daughter are wearing navy blue collared T-shirts with the word HAM emblazoned and the club logo embroidered on the pocket. On a low table, there are two rectangular pieces that look like car radios. Says Sraboni, “They are both radios — one of them is a Very High Frequency radio and can be used to communicate across 100 to 120 kilometres. The other is a High Frequency radio; it can be used to communicate worldwide.” The walkie-talkie in her hand, she says, does not work beyond a range of 10 kilometres.

The central government’s ministry of telecommunication conducts exams to grant licences and certify people as amateur radio operators. A unique “call sign” is assigned so they can transmit and access radio signals of a particular frequency range — something that only those belonging to specialised groups such as the army, air force, navy, secret services and the police could do once upon a time. Biswas is a licenced ham radio operator and his call sign is VU2JFA. “The call sign for all Indians begins with VU,” he explains.

Being a ham radio operator is not about indulging a personal whim, as Biswas makes clear. Over the years, he and his team have been using the radio to track down missing people, especially at giant annual mass congregations such as the Gangasagar Mela in West Bengal. Thus far, they have reunited 2,500 people with their families. They are also involved in disaster management and step in when earthquakes, cyclones, tsunamis and other natural calamities cause communication failure and telephone, mobile networks, Internet fail. Says Biswas, “We have operated during cyclones such as Aila, Phailin, and Hudhud; the 2001 Gujarat and 2015 Nepal earthquakes; and also during the 2013 Uttarakhand floods.”

Biswas’s interest in ham radio was kindled by a Hollywood film almost 27 years ago. He cannot remember the name anymore but he was intrigued by the communication device that the characters were seen using. Soon after, he learnt about ham radio operators and the half-a-dozen radio operating clubs in Bengal. He says, “When I went to the Gangasagar Mela for the first time, I noticed that the public address system was not very effective. I wondered, what happens to those lost, those who are too far to hear the announcement.” He suggested, to the mela authorities that they set up radio stations all around to track missing people. Since then, every year, Biswas and his team provide emergency communications and assist the administration during Gangasagar Mela. “From 300, the annual number of missing people is down to a single digit,” he says.

When asked about the reach of the amateur radio signal, Biswas looks amused and says, “Where your mobile network can’t. We can sit here and speak to someone in space too. In fact, that is a basic qualification for an astronaut — he or she has to be a ham radio operator.”

It seems every geography has a distinctive code. “If I’m in some other country operating a ham radio and I say ‘sic u sic u sic u. This is VU2JFA’, they will instantly understand it is an Indian in their land and respond.” He continues, “I don’t know all the world languages but I can still communicate with people from different parts of the world using the radio… We amateur radio operators share a bond. It is not like social media friends. Here there are no fake identities as every operator is a licence-holder.”

According to Biswas, the government does not grant a radio operator a license to help people in disaster management or to reunite people. “Most of these licensed radio operators do only radio-related research or technical work through these radios. We are the only club in the country or even the world to use ham radios for a different purpose.”

During Fani — the cyclone that wrecked Odisha earlier this year — he was asked to set up a ham radio system to establish communication as there was no network or electricity. “The families of stranded tourists in Puri were calling us. We would call up our stations in Bhubaneswar and Puri and identify their whereabouts.” The club also helps those abandoned in hospitals. Some such would be, an elderly woman who was admitted to a government hospital a year ago by her son under a fictitious name and address; a 25-year-old mentally challenged woman of Assam found in Diamond Harbour; a 25-year-old resident of Vaishali, Bihar, found in Howrah; a tribal woman found in Calcutta who returned to her native village Araju in Jharkhand after a decade.

And during the 2018 panchayat elections, the Election Commission asked the club to help in election-related communication in 31 areas of West Bengal where there was no mobile network coverage.

Part of the deal of being a ham radio operator is also that you learn to assemble the tools that you need for your work, from putting together a radio to creating the antennae that will support it. Biswas has set up Indian Academy of Communication and Disaster Management that organises regular workshops for antennae making, digital communication, how to interface radio with a mobile phone and so on. It also trains people for three months before they take the government exam to get a license.

It is said that the word “ham” was the station call of the first wireless stations operated by some amateurs of the Harvard Radio Club in 1908. Their names were Albert S. Hyman, Bob Almy and Poogie Murray. They called their station Hyman-Almy-Murray. Biswas says, “There are a lot of stories related to it. But for us, ham stands for help always mankind.”