Crushed hand brought back to life 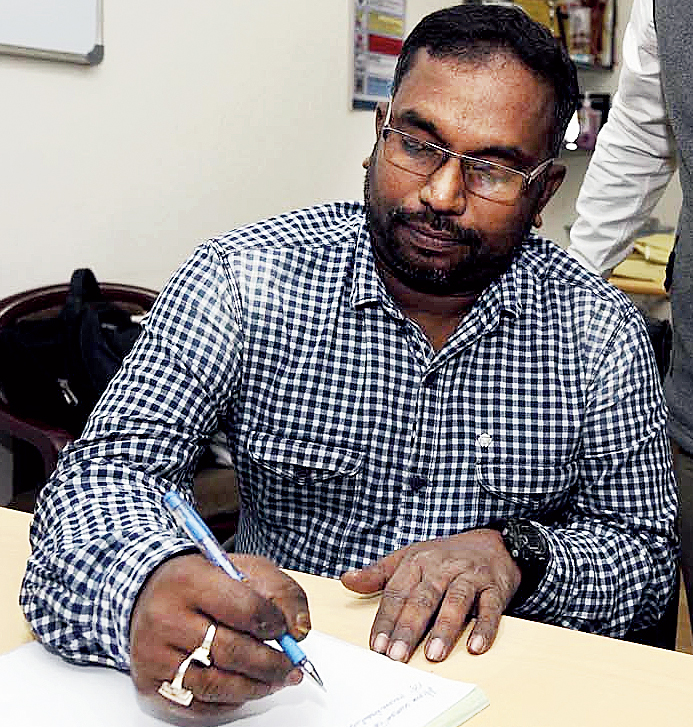 A 42-year-old factory owner who had his right hand crushed by a machine that bends iron has regained the use of his fingers after six months of battling pain, regret and the prospect of permanent disability.

Hirak Kumar Das had been standing in for a worker in his hairpin manufacturing unit at Belghoria, North 24-Parganas, on July 2 when he admittedly took the risk of hurrying through a task he wasn’t adept at.

“A World Cup round-of-16 match involving my favourite team, Belgium, was to start in a few minutes and I was in a hurry to finish whatever I was doing. I should have been focused on the work at hand, more so because I wasn’t used to handling this machine. The accident happened because of my fault,” he recounted during a medical check-up last Friday.

When he put his hand into the machine, Hirak’s index finger got severed from near the base. His thumb was severely damaged and the middle finger had a deep gash.

Hirak’s right hand was a bloodied lump of flesh when some of his workers took him to a private hospital nearby. The initial prognosis was that the damaged hand might have to be amputated. He was shifted to Apollo Gleneagles Hospitals, where doctors did a surgical procedure that involved making two abdominal flaps to preserve the thumb and the index finger.

“The fingers remained in the flaps for 44 days, by which time lost tissue was regenerated. There was a problem with blood circulation to the fingers at first and he needed another surgery to fix that. The healing process started after the second surgery,” said Srinjoy Saha, the plastic surgeon who carried out the twin surgeries.

Six months later, Hirak can write with his repaired hand. He is chuffed that his bank signature has been successfully verified.

Plastic surgeon Saha stressed the importance of concentration when handling even the simplest of factory equipment. “The injury suffered by the factory owner could have been far worse,” he said.

With physiotherapy, Hirak is able to pinch with his forefinger and thumb and also hold a glass.

Anupam Golash, plastic surgeon at CMRI, said: “It is commendable that the patient has recovered to a degree that he can perform most activities within such a short time after surgery.”