Have not yet arrived at a clear-cut decision, says senior party leader 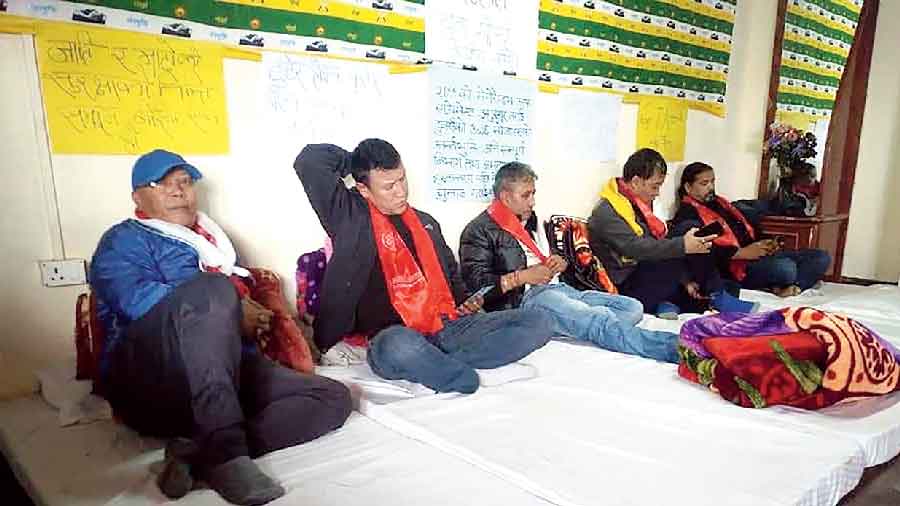 Morcha supporters at the hunger strike at the party office in Singmari, Darjeeling, on Tuesday
The Telegraph Picture
Vivek Chhetri   |   Darjeeling   |   Published 18.05.22, 01:32 AM

Gorkha Janmukti Morcha’s Bimal Gurung seems to have shot himself in the foot by declaring that his party would not contest the Gorkhaland Territorial Administration (GTA) polls without arriving at a consensus with his party colleagues.

“Our party will not contest the GTA election,” he told journalists late on Monday.

On Tuesday, a senior leader of Gurung’s party, who did not want to be identified, differed with Gurung.

“Daju (as Gurung is referred to) gave an indication that we would not contest the election. At best we can say we have not yet arrived at a clear-cut decision,” the Morcha leader told The Telegraph.

The Morcha has been maintaining that they would contest GTA polls only if all provisions granted in the 2012 GTA memorandum of agreement are fulfilled. The Morcha also wants inclusion of 396 mouzas from the plains of the Dooars and Terai to the GTA. The 2012 pact had included the provision of a committee to look into it, which it did, but the Morcha did not accept the findings of the committee.

The Morcha is organising a “token” hunger strike from 11am to 6pm  inside the party office to press their demands.

Noman Rai, the general-secretary of the Yuva Morcha, said permission to hold the hunger strike at Chowrasta was not granted by the Darjeeling municipality. “They told us that they would grant us permission to hold it in other civic properties. We will explore all possibilities before shifting the strike from our party office,” said Rai.

The GNLF and CPRM also submitted memorandums against GTA elections. The GNLF has been against the GTA from start.

Anit Thapa, president of Bharatiya Gorkha Prajatantrik Morcha, on Tuesday wrote to chief minister Mamata Banerjee with a request to expedite the process of regularising qualified volunteer teachers and setting up a regional school service commission for the hills. Many believe his demand has been made with an eye to the GTA elections.