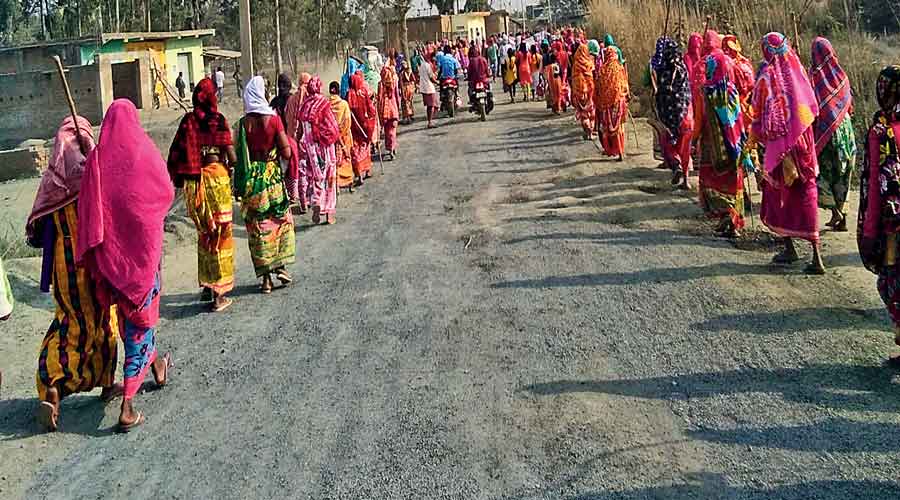 Some green activists of Bengal have sent a letter to chief minister Mamata Banerjee raising specific questions about the environmental impact of the proposed project to mine coal and basalt from Deocha-Pachami in Birbhum district, the letter coming at a time Nabanna’s ambitious project is facing opposition from a section of settlers.

After reminding Mamata how she opposed the chemical hub project in Nayachar on environmental grounds, the letter goes on to ask whether appropriate protocol to obtain environmental clearance has been pursued for the coal mine project.

“As environmentalists, we are especially worried as there is no information or data available in public domain about the possible impact of the proposed project, and any mitigation steps, if any, planned to counter those impacts … However, already the land acquisition process has started, the compensation package has been announced, and forms to apply for jobs are being distributed,” reads the letter signed by Naba Dutta, general-secretary of Sabuj Mancha; an umbrella body of various environment outfits.

The letter refers to the outcome of the Glasgow climate summit held last November where coal phasedown was agreed by all countries, including India, to curtain global emission and warming.

The original letter, submitted in mid-February, is in Bengali, raises these questions in the context to the project::

A fact sheet released by Nagarik Mancha, a nonprofit, on Saturday also refers to the Geological Survey of India’s report that cites the “existence of thick basalt layers” that will make mining of coal difficult.

An expert from Delhi has questioned the feasibility of the project in view of the growing resistance against thermal power projects.

“Since the Glasgow climate summit’s decision on coal, and release of subsequent global climate report that underlines the urgency of reducing coal use to minimise carbon emission, the Bengal government may face similar challenges that the Bangladesh government is facing now, (in) getting funds and technical support for a coal-based project,”said a climate expert in Delhi.

A senior official in the state environment department pointed out that the project is yet to start the procedure of obtaining mandatory clearance from the Union government.

“We have not heard anything officially, or even unofficially about the environmental clearance part … perhaps the government is first trying to ensure local logistics and acceptance,” said the official

“It’s a major mineral project, falls in ‘A’ category and hence needs clearance from the union ministry of environment, forest and climate change,” the official added.

Under the norms, the project proponents have to first apply to the Union ministry under the TOR (the terms of reference) section with a detailed project report  (DPR) and pre-feasibility report. Once that is cleared, the Union ministry, in principle, approves the project and the detailed environment impact assessment (EIA) report spread over three months is submitted.

The state pollution control board will have to conduct a public hearing once draft EIA is submitted and then forward the full documentation including videographic evidence of public hearing to the Union environment ministry for the consideration of environmental clearance.

“The state government is trying to fast-track the project with an attractive package to the land losers, but the challenge lies in getting environmental clearance,” said a green activist.