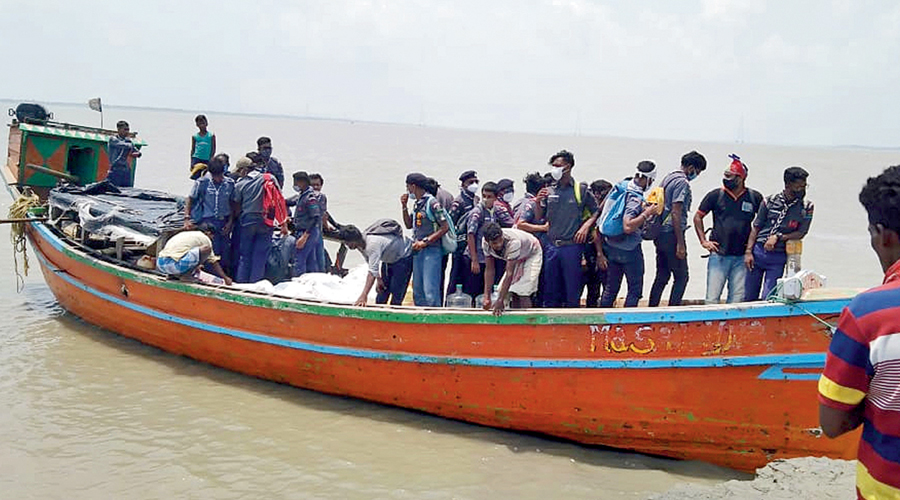 The state government has started a process to rehabilitate hundreds of families which are perennially exposed to vagaries of nature as their homes are situated on an island surrounded by two rivers and the Bay of Bengal.

The process started with 35 families being shifted from Ghoramara — a small island at Sagar in South 24-Parganas. A 6.5km stretch of an embankment on the island was washed away by Cyclone Yaas on May 26.

The rehabilitation has been kicked off ahead of high tides on June 11.

Sources said the 35 families would be taken to a government land in Dhaspur-Sumatinagar 2 gram panchayat in Sagar and would be initially sheltered at government accommodations.

This is the first time that the government has taken an initiative to rehabilitate people from any vulnerable island in the Sunderbans.

Ghoramara, which is among small gram panchayats in Bengal and has a population of roughly 5000, is located around 92km from Calcutta. The island is surrounded by the Hooghly and the Battala rivers and the Bay of Bengal.

“We will shift 35 families from the island to a safe place in Sagar because of the vulnerability of their homes, which are situated close to river embankments. There are many other families which need to be shifted from the island but we will do it in phases,” Sunderbans affairs minister Bankim Hazra said.

Sources said the decision of rehabilitation was taken after the island had faced severe damage during back-to-back cyclones in the past three years. However, the local people say the impact was highest in Cyclone Yaas as a large stretch of the embankment was washed away.

“It has become a challenge for us to save the lives and livelihood of around 1,150 families living on this island. Most of the families have bought land at several places like Kakdwip and Sagar. We are now identifying those who have no money to shift themselves from here,” said Sanjib Sagar, the chief of Ghoramara gram panchayat.

Officials said several of those families were facing problems of livelihood as saline water kept entering the island after the breach in the embankment. The coming high tides will further affect means of livelihood at Ghoramara, said a villager.

Before Yaas, the government had shifted around 2,500 people from the island and sheltered them in different cyclone centres by boats. After the warning of high tides, a process to shift the rest of the families has been started.

“We had appealed to the government to shift as many families as they can from this island. Most of the people lost their houses in Yaas just a few days ago. Now, they are being evacuated again. Is it possible to flee from your house every fortnight?” asked Surajit Kar, a resident of Ghoramara island.

The officials said many families from the island had already moved out of Ghoramara to Sagar or Kakdwip in the past 10 years as means of livelihood on the island were at stake. “But there are a lot of poor people who have nowhere to go. The government will provide them with land to set up houses outside the island,” said an official.

Asked about the state of the breached dyke, an irrigation department official said they were trying to save the island by reconstructing the damaged embankments. He, however, admitted that earthen embankment could not be a permanent solution to protect the island from natural calamities.

“We have already landed machines and started reconstruction of the embankment on the Ghoramara island,” said Kalyan Dey, the executive engineer of the irrigation department in Kakdwip.