Government gets cracking on hospital security 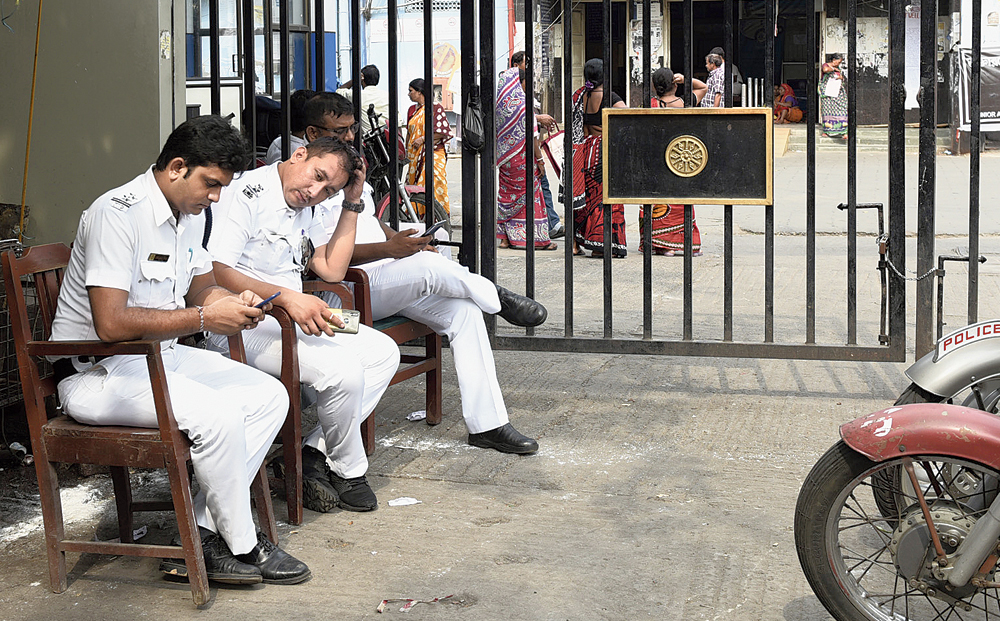 Policemen outside the gate of the NRS Medical College and Hospital that leads to the emergency ward on Tuesday
Picture by Sanat Kumar Sinha
TT Bureau   |   Calcutta   |   Published 19.06.19, 01:28 AM

The state health department on Tuesday held a series of review meetings on how to improve patient facilities at government hospitals and security of doctors.

The stress was on rooting out problems faced by patients, a department official said.

Such problems lead to anger and frustration among patients that result in heated arguments with doctors and assaults on them at times, the official said.

Rajiva Sinha, the health secretary, chaired a number of meetings on Wednesday where several of the issues flagged by junior doctors during their meeting with chief minister Mamata Banerjee were discussed.

The focus was primarily on security of doctors and convenience of patients at hospitals, an official said. “The stress was on patient convenience, the absence of which often creates problems at hospitals.”

At the NRS Medical College and Hospital, where two junior doctors were injured in an attack following the death of a patient, the authorities have decided to ask students, doctors, nurses and employees to have their identity cards on them as part of security measures.

Family members of patients will be asked to display the cards that are given to them after a patient is admitted, a hospital official said.

“We have decided on certain measures that we feel are necessary. We will talk about them with the police,” the hospital official said.

“Also, we have to persuade students, doctors and employees to have the identity cards on them... it will help the police identify people roaming on the hospital premises or inside the hospital without any reason,” the official said.

The hospital authorities will gradually implement these steps over the next few months, he said.

At least 3,500 patients visit the outpatient department at NRS on any given day, according to hospital authorities. The number of patients admitted to the hospital at any point of time is no fewer than 2,200.

Several people — relatives and friends — accompany patients and it is difficult to identify who all go in, the official said.

“We cannot stop and frisk people entering the hospital because everyone should be able to enter a hospital without any obstruction if they have to consult a doctor. These measures will aid the screening process as well as act as evidence in case of an attack,” he said.

As of now, both gates of the hospital are used to enter and exit the hospital, the official said. Plans are on to use one for entry and the other for exit, he said.