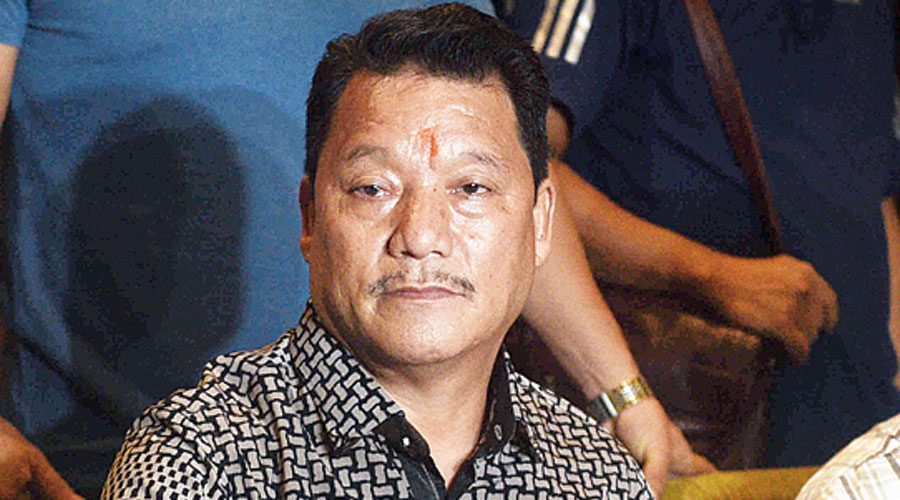 Bimal Gurung, the Gorkha Janmukti Morcha leader on the run since 2017, resurfaced in Calcutta on Wednesday after three years, announced his decision to sever ties with the BJP and expressed his desire to see Mamata Banerjee continue as Bengal’s next chief minister.

Gurung’s dramatic appearance and his comments at a hurriedly convened news conference indicated that the equations in hill politics — and north Bengal — were all set to change in the run-up to next year’s Assembly polls.

North Bengal has at least seven Assembly seats where the Gorkha community’s votes are decisive.

“We have supported a party (the BJP) for the past 12 years but that party has not met the commitments made to us. These include a permanent political solution for the hills, which I believe can only be Gorkhaland, while the other demand was the conferment of Scheduled Tribe status to 11 hill communities. That is why we have decided to separate ourselves from the NDA,” Gurung said.

Gurung’s reference to Gorkhaland was probably directed at his hill constituency. The Trinamul Congress is against the statehood demand.

After announcing the decision to part ways with the BJP, Gurung, who had earlier been critical of Mamata, went on to praise her and express a desire to see her continuing as Bengal chief minister.

“While I was sitting back for the past three years, I saw Mamata Banerjee meet whatever commitments she had made to the people. We have decided that in the Assembly elections of 2021, we will stand with her and Trinamul. She is an idol and we want to see her again in her post (of chief minister),” Gurung said.

The hill leader, who was last seen in public during the Independence Day celebrations at Ging tea garden in 2017, however, kept his option open for the 2024 Lok Sabha polls. He said he would support whichever party accepts the hills’ demand (for statehood).

The Telegraph had on Wednesday reported that Gurung was peeved with the BJP for lacking the “will” to solve the hills’ issues and was looking to chart a new political course.

Through the day there were whispers in the hills that Morcha (Bimal camp) leaders had held a meeting with some Trinamul politicians in Calcutta but there was no official confirmation till late in the evening.

Gurung was first spotted around 4.30pm in front of the Gorkha Bhawan in Salt Lake, seated in an SUV bearing a Jharkhand registration number.

Drama unfolded as the Bhawan – which comes under the Gorkhaland Territorial Administration, currently headed by Gurung’s rival Anit Thapa – refused to open its gate.
About an hour earlier, Roshan Giri, general secretary of the Bimal faction, had told journalists that Gurung would be addressing a media conference at the Bhawan. The venue was eventually shifted to a city hotel.

The hills were avid with speculation about Gurung’s possible return to the hills. “If he can resurface in Calcutta, why not in Darjeeling? It is just a matter of time,” said a Gurung supporter.

Gurung, asked about the cases registered by the state government against him, said: “I’m not a criminal or an anti-national. These are political cases and I intend to resolve those politically. Whatever I have done was for my land and my people. Even then, if I’m arrested, I’m ready with a smile.”

The Morcha leader said he had been in Delhi in 2017 and that he had been staying in Jharkhand for the past two months.

The BJP, probably stung by the developments in Calcutta, raised the issue.

“How can Gurung, against whom several FIRs including charges under the (anti-terror law) UAPA are pending, roam around in Calcutta with the police not arresting him? This is because Mamata Banerjee is trying to be in power by hook or crook,” said Dilip Ghosh, state BJP president.

It needs to be seen how Mamata handles Gurung and the rival Binay Tamang-Anit Thapa camp. “A law-and-order problem in the hills between these two factions would not be in Trinamul’s interest,” said an observer.

Trinamul welcomed Gurung’s commitment to peace and his decision to withdraw support to the NDA and repose faith in Mamata’s leadership. “The BJP’s attempt to use the Gorkhaland issue for petty politics and their untrustworthy nature now lay (sic) fully exposed before people of Bengal,” Trinamul tweeted.

On how the other Morcha faction might react to the latest development, Trinamul’s official response was balanced.

“We are confident that all the key stakeholders in the hills, including political parties and the GTA, along with civil society, will work together and join hands with us for the peace and prosperity of our motherland,” the party said.

Keshav Raj Pokhrel, spokesperson for the Binay Tamang camp, said the developments had shown that Gurung was the “bigger” betrayer -- a tag the Bimal camp had given to the Tamang faction for joining hands with Trinamul in 2017.

“Gurung’s biggest challenge will be to convince the Gorkha population that he remains in the vanguard of the Gorkhaland demand despite joining hands with Trinamul,” an observer said.

BJP leader Ghosh slammed Mamata and Trinamul while attempting damage control on the subject of statehood.

“The BJP had never supported the (demand for a) Gorkhaland state. Is Mamata Banerjee giving in to Bimal Gurung’s demands? Why is he suddenly all praise for her

Thousands of Gorkha men have been out of Darjeeling for the past three years and so was Bimal Gurung because of the Trinamul government. What will happen now?” Ghosh said.

He conveniently overlooked how his party’s central leadership had repeatedly, though obliquely, mentioned the statehood issue in its manifestos ahead of parliamentary elections in recent years.