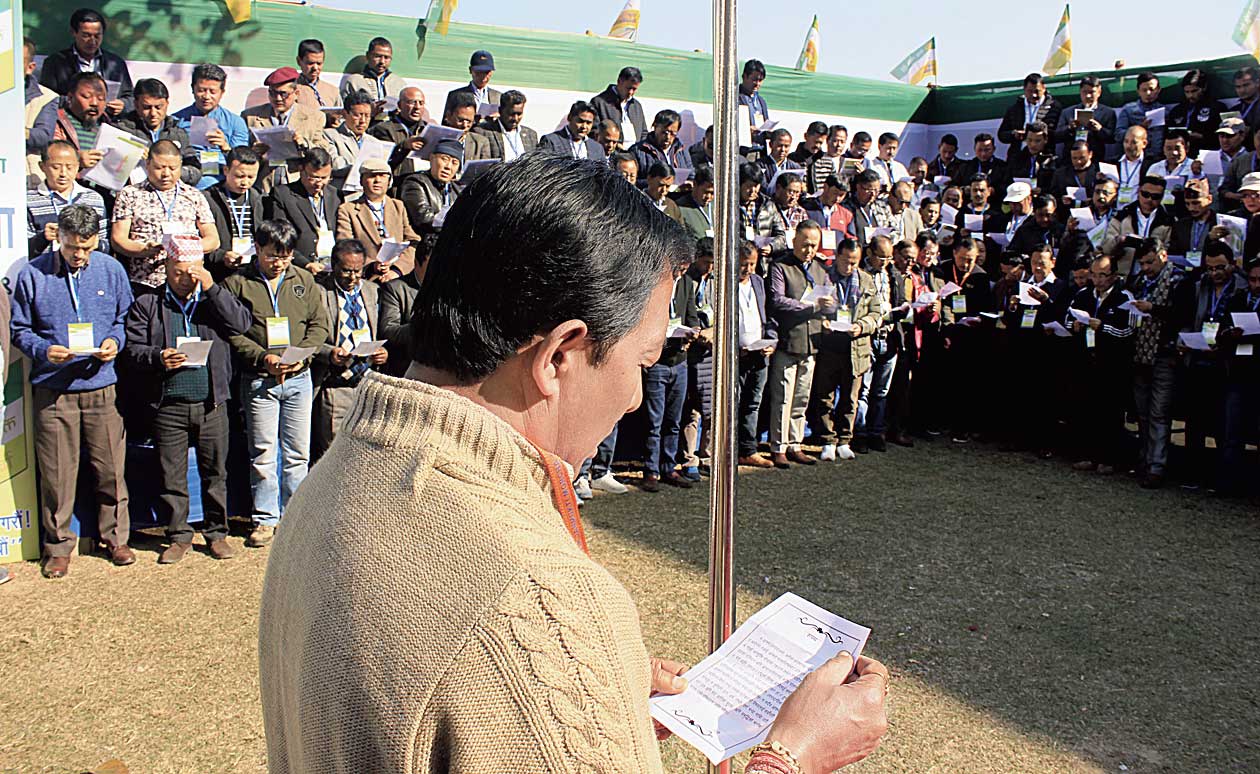 The Gorkha Janmukti Morcha has decided to work towards getting constitutional recognition and legislative powers for the Gorkhaland Territorial Administration, though the party’s long-term goal is to safeguard “jati, mato and chinari” (community, land and identity).

The Binay Tamang-headed Morcha held a two-day Chintan Sabha at Sukna last week and decided to set short, mid and long term goals for the party.

The Morcha has divided “issues” into goals of three durations.

“Our short-term plan is to ensure smooth functioning of the GTA. The important decision of the Chintan Sabha is our mid-term goal of getting constitutional recognition for the GTA and conferring legislative powers on it,” said Sharma.

This is the first time that the Tamang-headed Morcha has set clear goals for the party which, sources say, is an attempt to be “practical” by understating the “political realities” on ground.

Though not said in as many words, the Morcha sources were hinting that the statehood was a distant dream at the moment.

The GTA had been formed through a bill passed by the Bengal Assembly and it was signed into law by the President. The GTA does not feature in the Constitution of India and enjoys no legislative powers.

A body, which can come into being through an amendment to the Constitution, will have permanency.

The erstwhile Darjeeling Gorkha Hill Council did not have constitutional recognition. Although a council was mooted under the Sixth Schedule of the Constitution, many opposed such an arrangement which is essentially for an area dominated by tribal people. The Scheduled Tribe population of the Darjeeling hills stands only at 34 per cent.

The Morcha said its long term objective was to safeguard “jati, mato and chinari” (community, land and identity). Some proponents of

Gorkhaland link the demand with the identity of Indian Gorkhas.

During the Chintan Sabha, the Morcha passed 13 resolutions on areas they want the GTA to focus on, like tourism, education, health.

“Our major focus will be on granting land rights to tea and cinchona plantation workers and getting tribal status for 11 hill communities,” said Sharma.

The Morcha adopted 55 resolutions at the two-day session. “We have also drawn up a-year long party programme and decided to make our organisation cadre based,” said Sharma.