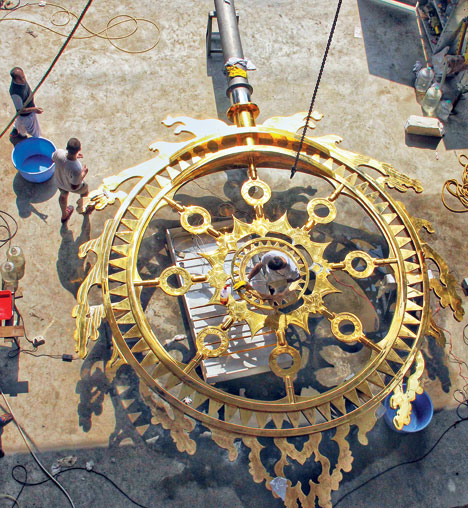 Mayapur: Ambarish Das, better known as Alfred Ford, said on Monday that a gold-plated stainless steel giant wheel or chakra would be installed on the top of the massive dome of the under-construction Temple of Vedic Planetarium on Wednesday.

Alfred Ford, the grandson of Henry Ford, is the chairman of the project that is building the Rs 700 crore temple of the Iskcon in Nadia's Mayapur.

Speaking about the planetarium, Ford, an Iskcon devotee, said it would attract millions of tourists.

"The planetarium will attract millions of tourists to Bengal and provide a boom to the tourism industry in the state - the same way the Akshardham temple in Delhi gets visitors. However, we have to go a long way by developing infrastructure with the help from the state government. I am hopeful that in 2022, once the entire project is completed, many people will visit it," he added.

Ford has already approached the government for help to develop infrastructure in Mayapur.

"We are looking for a close relationship with the government and hopeful that it would be enthusiastic to help us," Ford told The Telegraph.

However, Ford said he would not like to "disturb" chief minister Mamata Banerjee when she is expected to visit the Iskcon temple at Mayapur on February 12.

Iskcon sources said the temple is spread over 350 acres and would accommodate a big model of the universe, including its creation as mentioned in Bhagavad Gita. There will also be an audio visual presentation in this regard.

Ford said a team was regularly in touch with the state and central governments.