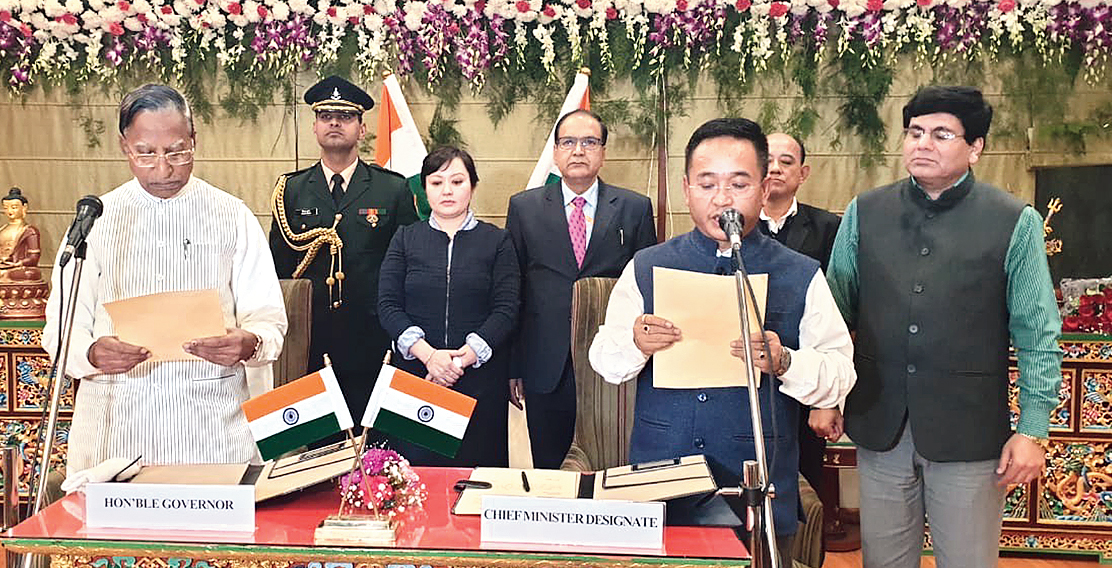 Sikkim Krantikari Morcha president P.S. Tamang (Golay) was sworn in anew as the chief minister in New Delhi on Saturday night, but the surprise exercise raised questions on the need for him to take oath for the second time.

A press release issued by the office of Sikkim governor Ganga Prasad said he had conducted the oath-taking ceremony of the chief minister at Sikkim House in New Delhi.

In another ceremony on Sunday, all 11 members of the Golay cabinet were administered the oath of office and secrecy again by the governor in New Delhi.

The release said “the fresh appointment and subsequent swearing-in was necessitated following the completion of six-month term at (sic) office of Chief Minister by Shri Prem Singh Tamang and his election to the Sikkim Legislative Assembly in the Assembly bye-election held in October”.

Golay had assumed office of chief minister on May 27 following the victory of his party in the Assembly elections. Since he was not a member of Assembly then, the law required him to become an MLA within six months. Golay won a by-election to the Poklok-Kamrang Assembly constituency in October and became the MLA.

“Going by the press release issued by the governor’s office, since Golay assumed office on May 27, he ceased to become the chief minister on completion of six months on November 26. The rule is that when a chief minister or a prime minister resigns, the entire cabinet goes. Nothing of this sort happened. Both Golay and his cabinet continued to be in office. Or, was there no legitimate government in Sikkim for four days from November 27 till yesterday when Golay was sworn-in afresh?” asked Nawin Pradhan, an activist and lawyer.

An official source, however, told The Telegraph that Golay had first resigned before being sworn in again on Saturday night. “The chief minister wanted to be sworn in again after becoming a member of the Assembly. There is nothing more to it. The swearing-in took place in New Delhi because the governor is recuperating from a spinal cord injury there and could not travel to Gangtok,” said the source.

The lawyer-activist said the fresh swearing-in was absolutely unnecessary.

“There was absolutely no need to conduct a fresh swearing-in. Golay was not invited to form the government only for a period of six months. The only condition he had to fulfil in order to continue in office beyond six months was his membership in the House,” said Pradhan.

Echoing him, K. T. Gyaltsen, a senior leader of the opposition Sikkim Democratic Front and a lawyer, said a huge amount of public money had been wasted to carry out an exercise that was not needed at all.

“I am not a constitutional expert, but my common understanding of law is: was this swearing-in really required?” he asked, adding that Saturday’s development was “unprecedented” in Sikkim.

An observer, however, said Golay might have decided to take oath afresh to avoid legal complications in the future. “The governor’s decision to invite Golay to form the government in May is being challenged in the Supreme Court since he was not eligible to contest any election owing to his conviction in a corruption case at that time. In case the top court upholds the challenge, Golay will have to resign. By taking oath as the chief minister after being elected to the Assembly, he will avoid that threat,” said the observer.

Golay was able to contest the October bypoll after the Election Commission of India reduced his disqualification period for contesting an election from six years to one year and one month. That decision is also being challenged in the court.