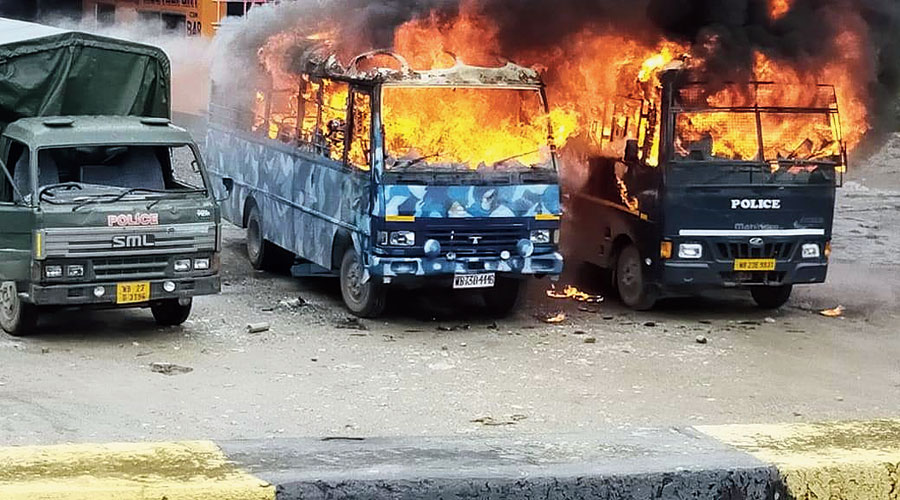 The unnatural death of a girl, a Madhyamik examinee from Chopra block of North Dinajpur, turned a stretch of the NH 31 into a battlefield on Sunday.

The girl from Sonapur panchayat left home on Saturday evening, her brother said.

“Early on Sunday, we heard she was near a tea plantation 500 metres from our home. We found her lying, still alive. At the local health centre, doctors told us to take her to the Islampur subdivisional hospital, 25km away. At Islampur, doctors declared her dead. We suspect she was tortured and poisoned,” the brother said.

As news spread, scores of residents blocked a road that connects the girl’s village with NH31 around 9am, demanding the arrests of those behind the girl’s alleged murder. Chopra policemen tried to dissuade protesters in vain. The crowd swelled and some people headed for NH 31. Around 11.30am, they set fire to tyres and blocked the highway.

“The police found a cycle, a phone, some papers and an umbrella from the spot (where the girl was lying). The girl’s family said these items weren’t theirs. It is obvious that the items belong to the killers. We won’t budge till arrests are made,” said a demonstrator.

Around 3.30pm, when talks between protesters and the police heated up, some angry people started pelting stones at the police. The police retaliated with batons and teargas. Tempers flared, the crowd hurled more stones and a few crude bombs at the police, ransacked and torched three police vehicles and two North Bengal State Transport Corporation buses stranded on the highway.

Sachin Makkar, the SP of the Islampur police district of North Dinajpur, said they started a probe into the girl’s death and were searching for those who attacked the police.

BJP’s Raju Bista, the Darjeeling MP under whom Chopra Assembly segment falls, slammed the state government for the incident. “Chopra has become a hotbed of criminals, some of whom enjoy political patronage, but the state turns a blind eye to the area. I urged the Union home minister and the Bengal governor to ensure central agencies are tasked for a probe,” said Bista.

Trinamul MLA and state tourism minister Gautam Deb countered that the BJP was “keen on doing politics on every issue”. “It is an unfortunate incident and the police are probing. On Monday, I and a state minister and some lawmakers will meet the bereaved family. The state government is with them,” said Deb.

Additional reporting by our Siliguri bureau