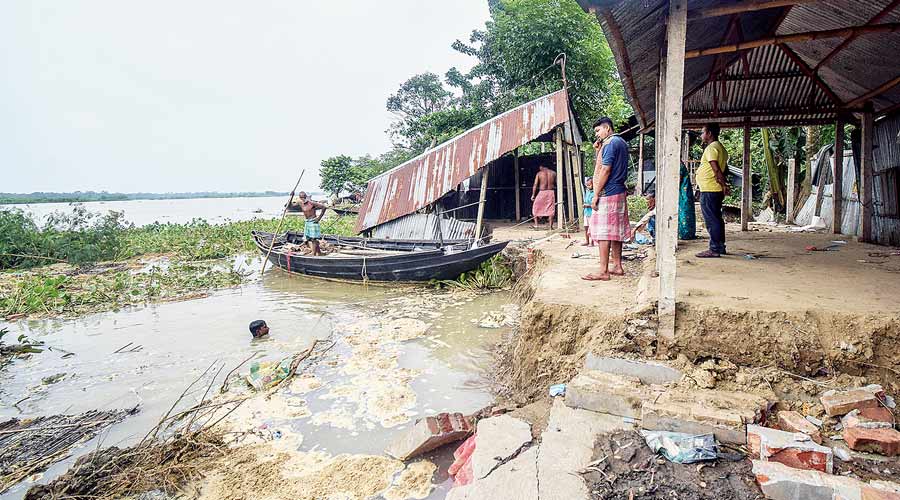 Around 35 houses, a metalled road and a mosque were gobbled by the Ganga in an unexpected fresh erosion in KaliachakIII block of Malda district since Monday morning.

Over 100 residents people of Chinabazar, a hamlet under BirnagarI panchayat of the block, have become homeless within a few hours and were shifted to safer places. Some others are busy shifting their belongings and also dismantling their houses to take away whatever they could salvage out of the rubbles as the river is aggressively eroding chunks of land every hour.

“The erosion started around 6am and in the next five to six hours, at least 35 houses, a road and the local mosque were eroded by the Ganga. For the past few days, water levels of the river had receded but it increased againI have also lost my house in the erosion,” said Harun Al Rashid, a member of BirnagarI panchayat.

“We stood helplessly watching our houses collapse into the river. We don’t know when this erosion will stop. The administration should help erosion victims,” Rashid added.

Sources in the state irrigation department said the Ganga is flowing at 25.02 metres, around 33 centimetres above the danger level and as the river started eroding land and gulped above it, the residents panicked.

The women and children were shifted to safer places while the men hurriedly assembled their belongings and moved out of the houses which stood precariously as the Ganga went on eroding the earth from underneath the structures. Over 300 houses in different areas of Kaliachak-III block, along with vast stretches of agricultural land, have been gobbled by the Ganga this In the current-monsoon season.

Chandana Sarkar, the Trinamul MLA of Baishnabnagar, said: they are in touch with the administration. “We will see that the affected families are provided with all necessary help. Also, the block administration is monitoring the situation to ensure that there is no casualty due to erosion.” the MLA said.