Free lessons at Xavier’s in life after JU 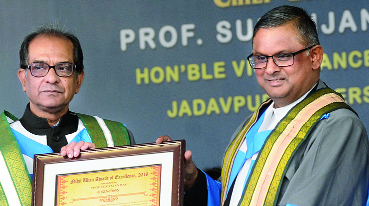 Jadavpur University vice-chancellor Suranjan Das will be “happy to teach free of cost” at St Xavier’s College once he is freed from the “shackles of administrative responsibilities”, he said on Wednesday after becoming the first non-Xaverian to receive the Nihil Ultra Award of Excellence.

Das, who might have a tougher decision to make if he is offered an extension at Jadavpur University post-65, said St Xavier’s College starting a postgraduate course in history would give him the opportunity to be part of an institution he had always admired.

He complimented the Jesuit-run institution for “new initiatives” and “achieving new heights of excellence”.

“I had the unique opportunity to be a part of the process through which St Xavier’s was granted autonomous status. I have also closely observed how effectively the college (has) used the autonomy to attain new heights of excellence…. I am sure the college will reach new pinnacles of glory in the coming days,” Das said at the 12th annual convocation of the Park Street institution.

He spoke for nearly 13 minutes, focusing on what St Xavier’s had achieved and touching on some “crucial” issues.

“How do we balance demands for economic growth and environmental security? How do we link the tremendous development of Indian science and technology with distributing justice? How do we guarantee that the information technology revolution being promoted in our country will not create a new digital divide in our society? How can India deal with the situation where job creation has not kept pace with the growth of GDP. How do we make the gross enrolment ratio in higher education reach at least the world average of 32 per cent?” Das said.

The citizenry, he said, was banking on institutions like St Xavier’s College and even the fledgling St Xavier’s University in New Town to produce “creative and democratic” young people capable of addressing these issues.

“We do look forward to the college to provide us with initiative in developing a healthy, vibrant and democratic secular society in this state,” Das said, turning to the principal, Father Dominic Savio, on the dais.

St Xavier’s College (Autonomous) is under Calcutta University, of which Das was the vice-chancellor from 2008 till 2015 and pro-vice-chancellor (academic) between 2002 and 2008.

He was almost sure to retire from Jadavpur University this June till chief minister Mamata Banerjee announced at the Calcutta University convocation that vice-chancellors would be retained till 70. The retirement age of teachers is being raised from 62 to 65.