Since the 'Chokher Alo' scheme has been launched, around 90,000 people have been screened at the camps in the past seven days and 20,000 free spectacles distributed 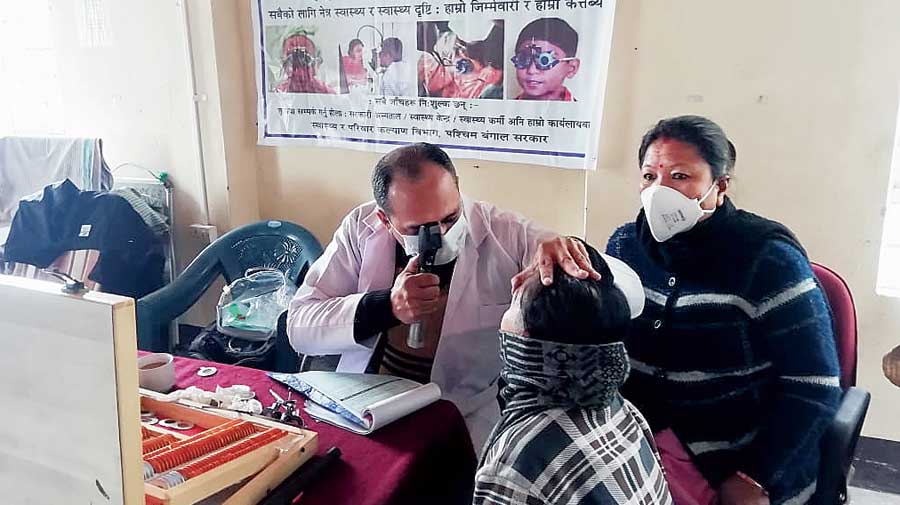 The Bengal government’s “Chokher Alo” scheme, a programme that aims to eradicate vision impairment in the state, has come as a big help for people who depend on free eye check-up and operation camps that have been halted for the past 10 months because of the outbreak of Covid-19 and the lockdown that was clamped in March last year.

The scheme, a brainchild of chief minister Mamata Banerjee, has also come handy for the state government that is eager to reach out to lakhs of people who need to undergo cataract operation or other eye check-ups in the months preceding the Assembly polls. The government has already reached out to over two crore people through its Duare Sarkar camps.

The camps will treat people across Bengal for three months and the process has been set rolling on January 5. The camps have been planned on the Duare Sarkar model and will be held at all gram panchayats and municipalities.

A health department official said at the camps doctors would screen patients for ophthalmological problems. If required, they would be provided spectacles and medicines free of cost. “Those who will require cataract or any other eye operation would be taken care of at government hospitals,” the official added.

“Every year the government reaches out at least 15 lakh people ailing from eye-related problems. Due to Covid-19 outbreak it was not possible for NGOs to organise eye camps. So, the ‘Chokher Alo’ scheme will reach out to people suffering from eye illness in the camp mode,” he said.

“The chief minister is so happy with the project that she has asked us to organise a mega camp at the end of January to provide free treatment to around 50,000 people across the state,” the official added.

Health department sources said the government had conducted around 2.5 lakh cataract operations and checked over 15 lakh people free-of-cost between April 2019 and November 2020. Apart from this, there were many NGOs who independently provided free treatment through eye camps.

Since the “Chokher Alo” scheme has been launched, around 90,000 people have been screened at the camps in the past seven days and 20,000 free spectacles distributed. Since January 5, at least 1,600 patients have undergone cataract operations under the scheme.

“We suspect that there would be at least 20 lakh people who have been deprived of treating eye illness because of the pandemic,” said a senior official.

The government officials said the drive was important as most people in the age group of 45-75 suffer from eye diseases. So, the government plans to reach out to these people with free treatment, spectacles and operation in the run up to the Assembly polls.

“As per record, there are around 2.5 crore people in the state who are in age group 45-75 years. Apart from this age group, screening of children and others is being done at the camps,” said a health official in East Burdwan.

“We have received fixed power spectacles to correct vision inaccuracies. But those who will need customised lens will be provided spectacles within 10 days of treatment,” said a health official.

NGOs that organise free eye check-up camps and operations also admitted that they could not hold their programmes because of the pandemic. “Mass gatherings were prohibited since March last year. Every year we try to organise at least 100 free check-up and cataract operation camps. Due to Covid we could hold only 10 camps last year and most of those were organised in the first two months of 2020. Chokher Alo is a welcome move from the state government as it will help clear the huge backlog,” said Bhaskar Dev Mukherjee, an ophthalmologist and secretary general of Savior Holistic International Trust, an NGO that organises free eye camps across Bengal.

Trinamul leaders said people in rural areas had problems consulting ophthalmologists after the outbreak of Covid-19. During the lockdown most people belonging to low-income groups spent their small savings to survive and had no money to consult doctors or buy spectacles, a Trinamul leader said and added that the eye scheme had come as a big help for them.

“The project will help elderly people who have been coming to us with eye problems. Coming before the polls, the scheme, along with Duare Sarkar camps, will also help us politically,” said Sujoy Das, a Trinamul leader from Birbhum’s Muraroi.