British historian Philip Davies had once said of the Hooghly river that it is not just one Indian river, but belongs to the world 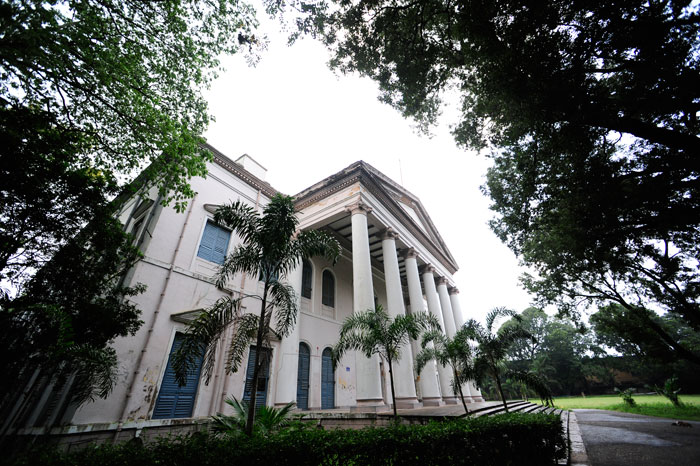 Four centuries ago, the settlements along the Hugli river or Hooghly as it is called now — a branch of the mighty Ganges — attracted maritime traders from as many as five European nations, turning that part of Bengal into a little Europe. The Portuguese set up post at Bandel, the Danish at Serampore, the Dutch at Chinsurah and the French at Chandernagore. A British military base came up in Barrackpore.

Lately, there has been a scramble to study, preserve and document this mixed heritage. Several initiatives have been undertaken. The Hugli River of Cultures Project is one such by the governments of the United Kingdom and India. A team of researchers as well as partner teams from the University of Liverpool and the Indian Institute of Technology, Kharagpur, are collaborating on it. The pilot project also involves a good number from the local student community. When it ends in January 2020, it is expected heritage activists across all five towns would have been trained in the documentation and promotion of tangible and intangible heritage.

“The colonial vestiges here lie scattered. We are trying to gather the bits and pieces and showcase a palimpsest for future generations,” says Purba Chatterjee, a senior volunteer with the project. And what will be done with it all? Says Soumyen Bandyopadhyay, co-investigator of the project and head of the School of Architecture at the University of Liverpool, “Economic development through cultural heritage tourism could be one of the solutions to this phenomenon of rapid urbanisation and demolition of heritage structures.”

What about the intangibles, you might ask. Says Ian Magedera, senior lecturer from the University of Liverpool and principal investigator of the project, “Some of the elements — the intangible heritage — have been culturally integrated and have become part of the local tradition, be it cuisine, language or aesthetics.” And in that sense, those are perhaps more secure and safer, requiring only the iterating then and now. 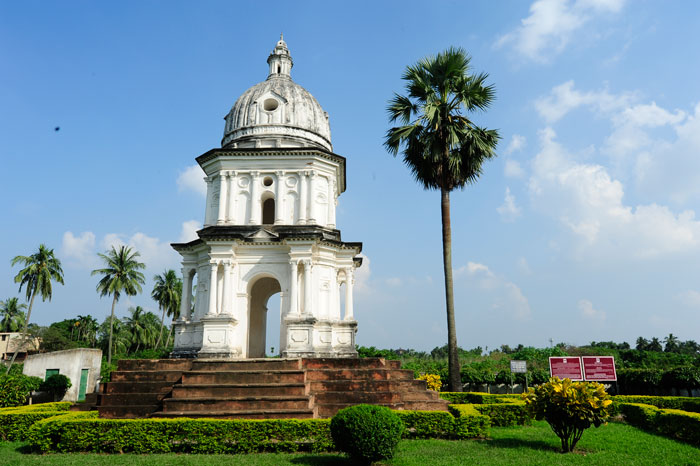 The Portuguese were among the first European traders to discover the sea route to India as early as 1498. By the mid-16th century, Portuguese settlements dotted the eastern and western coasts of India. These included Porto Pequeno or Satgaon (a port near the confluence of the now dead Saraswati and the Hooghly) and later Bandel, 45 kilometres north of Calcutta.

The Portuguese introduced a variety of fruits and vegetables — from potato, tomato and green chillies, to corn, papaya, pineapple and guava. They taught the locals the art of making cheese, be it the salty Bandel variety, the Dhakai paneer or the omnipresent chhana or cottage cheese. Till then, chhana, actually curdled milk, was frowned upon by upper caste Bengalis. The traditional modaks or sweetmakers of Hooghly later mastered this art to create a range of sweetmeats — sandesh, rasogolla and chamcham.

Taken-for-granted Bengali words such as almari (almirah), chaabi (key), janala (window), balti (bucket), even saya (petticoat), alkatra (tar), saban (soap) are all Portuguese in origin. In 1599, a Portuguese missionary called Dominic de Sosa wrote the Catholic Catechism or the Exposition of the Gospel of Mercy in Bengali using the Roman script. Around the same time Bandel Church, the oldest Christian edifice of worship in Bengal, was built by the Portuguese settlers. The first Bengali grammar book, dictionary and a rudimentary book of prose were printed in Lisbon in 1743.

It was once one of the largest trading posts for the Dutch East India Company or VOC (acronym for Vereenigde Oostindische Compagnie). The Dutch traded in saltpetre, spices, cotton, silk and indigo. Around 1740, the VOC built Fort Gustavus here, named after the governor-general, Gustaaf Willem van Imhoff. Today, the only surviving feature is its artillery wall, which is a part of the building of the Hooghly Madrasah that was erected a century later. There are two Dutch canons as well, the last remains of the fort.

The Dutch settlement was strategically located on a bend in the river. “It was a location perfect for pleasure gardens and mansions, with steps leading down to the river,” says Aishwarya Tipnis, an architect leading a project called Dutch in Chinsurah, funded by the embassy of the Netherlands in India. A painting by Hendrik van Schuylenburgh from 1665, titled The Dutch East India Company’s Factory in Hooghly, shows that the locals (traders, brokers) were quite close to the VOC and its officers.

The town of Chinsurah grew under the influence of the Dutch who preferred brick houses and narrow streets with underground drains and channels. Dutch drains at Ghanta Ghat and water level markers at Datta Lodge are the remnants of fine Dutch public engineering works.

The Dutch also founded the Native Free School and an orphanage. That they mingled with the locals is evident from the fact that Daniel Overbeck, the last Dutch governor, gifted two brass drums to the Shandeshwar Shiva Temple, and these continue to be in use.

In 1755, the Danish Asiatic Company was granted the right to establish a trading post here by Nawab Alivardi Khan. The Danes settled on 60 bighas of land about 25 kilometres north of Calcutta. They named it Frederiksnagore in honour of the Danish monarch, King Frederik V.

Centred around the magnificent St. Olav’s Church, Frederiksnagore developed into an elegant township with a collonaded governor’s house, a jailhouse, the majestic Serampore College and a tavern by the riverside. Bengali agents of Danish traders, such as the Goswamis, flourished during the period and founded an aristocratic colony on the western side of the town. Those mansions — locally referred to as rajbaris — still exist.

For years these structures lay in neglect and near ruin. Then in 2008, the National Museum of Denmark established the Serampore Initiative to restore the precious heritage.

The most valuable and perhaps enduring gift from the Danes, however, is the legacy of education and social reform. They established educational institutions, including those for girl students. In 1827, Serampore College was recognised by the Danish Royal Charter and became the first modern university of Asia.

Also legendary is the Serampore Mission Press, where wooden Bengali types were installed. One of the founders of the press, William Carey, published several grammar and lexicographical works in Sanskrit, Bengali and other Asian languages from here.

It was planned by Robert Clive, the first governor-general of the British East India Company, and developed as a cantonment for British troops in 1765. These exclusive habitats were set up away from the main city, but along the trade route.

When Marquess Wellesley took over as the governor-general in 1801, he decided to improve the area. He created a designated summer home for governor-generals, landscaped the gardens, added an aviary, a menagerie and a theatre. Barrackpore Park became a popular leisure spot after the 22-kilometre Barrackpore Trunk Road was built in 1805 to connect the two places. Watercolours preserved at the British Library reflect the serene beauty of the place.

The menagerie and aviary were the first attempts at a systematic study of zoology in the world. In fact, when the London zoo was being planned in the early 19th century — it opened to the public only in 1847 — officials came down to Barrackpore to inspect the menagerie. Contemporary Barrackpore is still a military cantonment with its impeccable gardens (known as Laatbagan). However, the remains of the zoo can barely be seen. The West Bengal State Heritage Commission has recently launched an initiative to restore Laatbagan and the adjoining areas.

The French were granted a firman by Emperor Aurangzeb to found a factory at Chandernagore in 1688. By 1701, they had built Fort d’Orleans by the western bank of the Hooghly. But the settlement, known as Farashdanga, didn’t flourish as a trading post until 1731.

The French exported textiles, jute, opium and indigo from here to Europe and elsewhere. This encouraged the development of a local handloom industry famous for its fine textiles, also known as Farashdanga-r taant. There are remnants of those looms and a few weavers’ families at Halderpara to date.

After the arrival of governor-general Joseph Francois Dupleix, French revenues increased to record levels, leading to a complete makeover of Chandernagore in terms of architecture and urban planning. Over 2,000 brickhouses with the characteristic French touch were built along with magnificent churches and basilicas. Dupleix built a colossal mansion, later known as the Dupleix Palace, for himself by the riverside. The Strand promenade was built a century later. Today, all that remain are 99 buildings including the erstwhile palace where now stands the Institut de Chandernagore, a museum that houses relics of French colonial history.

The Chandernagore Government College still has a robust French department. “The practice of the French language in the town is the most important living heritage,” says Chatterjee. “It is still taught in schools and colleges and most families consider it an honour to learn the language, not for any professional gains but for its own sake,” she adds.

Every year on July 14, the French celebrated the storming of the Bastille Fort during the French Revolution. A celebratory fete or fiesta is organised and the whole town is lit up. The famed lighting technologies mastered by local craftsmen now add sparkle to the autumnal festival of Jagaddhatri Puja.

For centuries, Bengal has drawn people from different parts of the world. Turks, Pathans, Persians and Europeans. The land was enriched by these visitors. Says Magedera, “There’re several elements in Bengali society that have been culturally assimilated through centuries. The presence is not directly felt but it’s there. Different people arrived here with their distinct cultures and they were assimilated. It’s like the layering of sediments in the river — the sediments of history.”