After spending over two hours at the spot, officials went to Rampurhat police station to scan the scooter on which Bhadu had been sitting while he was killed 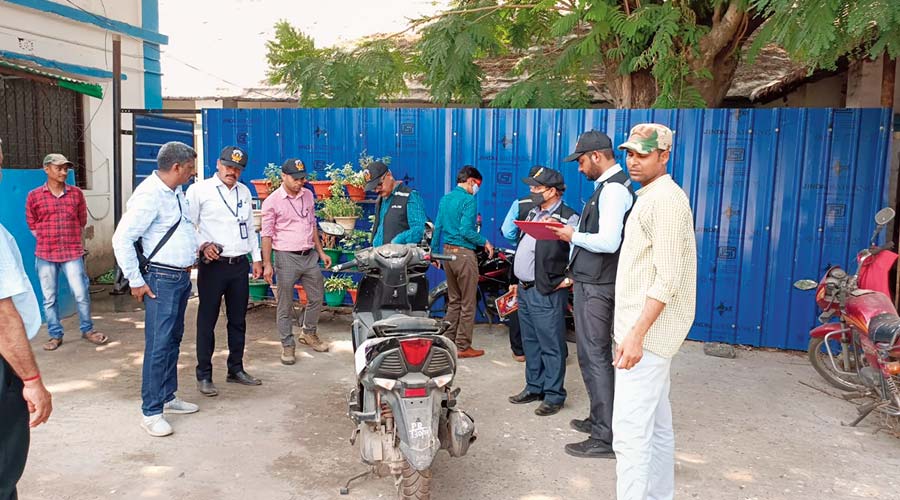 Forensic experts on Tuesday inspect a two-wheeler on which Bhadu Sheikh was sitting when he was killed
Telegraph picture
Snehamoy Chakraborty   |   Calcutta   |   Published 13.04.22, 02:40 AM

Experts of the Central Forensic Science Laboratory (CFSL) on Tuesday visited the spot, where Trinamul Congress leader and deputy chief of Barshal gram panchayat Bhadu Sheikh had been killed on March 21 evening, to collect samples for the CBI.

Bhadu’s murder apparently led to a retaliation by his followers at Bogtui village in Birbhum district, leading to the death of nine persons, including seven women and a child, on March 21 night.

After spending over two hours at the spot, the forensic experts went to Rampurhat police station to scan the scooter on which Bhadu had been sitting while he was killed.

CBI sources said though at least 21 days had passed since Bhadu’s murder, the forensic experts were sent to find out if they could get any fingerprint or evidence. “The CFSL staff tried to find out if the fingerprints or any other clues were found from the spot as well as from the two-wheeler. We will know about the outcome only after we get the report,” said a CBI source.

The CBI on Tuesday moved a plea before the juvenile justice board at Suri for a polygraph test on one of the two minors arrested in connection with the Bogtui massacre. But the board rejected the plea.

“Both the minors, who are accused in the Bogtui case, were produced before the juvenile justice board and the CBI wanted to conduct a polygraph test on one of them. However, the board rejected the plea and sent the two minors to a safe home. The duo would be again produced in the court on April 25,” said Anindya Singha, the assistant public prosecutor of Juvenile Justice Board in Suri.

In the evening, CBI (DIG) Akhilesh Singh visited the site of Bhadu’s murder. “The focus is now on Bhadu’s murder,” said a CBI official when asked about Singh’s visit.

CPM leaders in Rampurhat on Tuesday submitted a memorandum to Rampurhat subdivisional officer demanding the intervention of the administration to stop extortion from stone-laden trucks.

“After the murder of Bhadu Sheikh and the Bogtui carnage, the extortion business has stopped. But recently, a group resumed the extortion racket in the name of collecting government revenue. We have demanded a thorough investigation in this connection,” said Amitava Singh, a district committee member of the CPM.