There have also been reports of several ruling party leaders leading a flashy lifestyle, something that the Bengal chief minister has never approved of 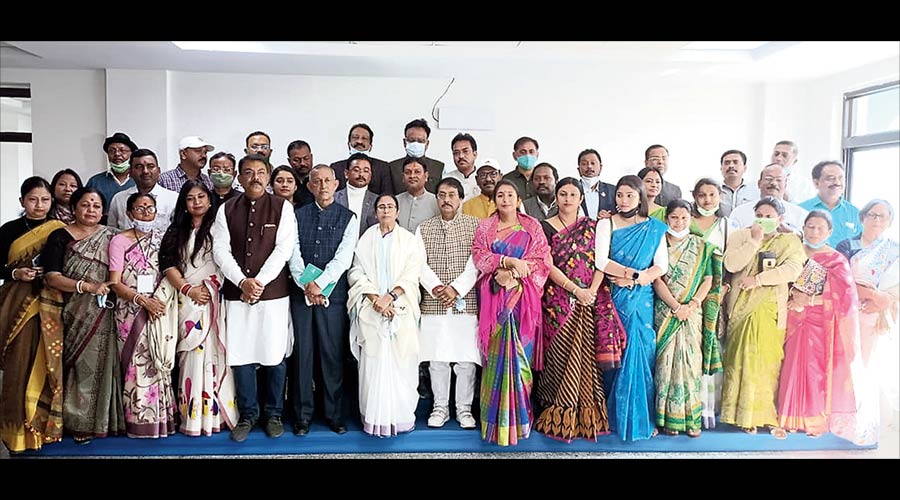 Mamata Banerjee on Tuesday told the newly elected Trinamul councillors of the Siliguri Municipal Corporation (SMC) to lead a spartan life and work for the common people, the message coming at a time the chief minister is repeatedly stressing the virtues of a simple life for leaders of the ruling party.

“You have a roof above your head… You get decent square meals. You can have a two-wheeler or at best a car to move around. Ideally, you should be using two-wheelers when you go out to meet people,” said Mamata in her brief interaction with the 37 councillors of Trinamul who came to Uttar Kanya to meet her.

The lesson that Mamata gave to the councillors assumes significance as the last few years have seen several Trinamul leaders making big SUVs and sedans with tinted glasses a part of their lifestyle. There have also been reports of several ruling party leaders leading a flashy lifestyle, something that Mamata has never approved of.

The chief minister told Gautam Deb, the would-be mayor of Siliguri, that after assuming office, he should constitute a monitoring cell.

“You should form a monitoring and implementation cell to check progress and execution of development works (in the SMC). I will also monitor (it),” she said.

She also asked the councillors to put in all possible efforts so that Siliguri — the largest city in north Bengal and the gateway to the Northeast — can be developed as urban centres like Calcutta and Rajarhat. “You will have to ensure participation of people from all walks of life in the development process,” she said before adding that development didn’t only mean “large expenditure”.

The chief minister’s missive to the councillors, a source said, meant she did not want any malpractice in the running of the civic body.

In 2012, a year after Mamata first came to power, a scam had come to surface at the Siliguri Jalpaiguri Development Authority (SJDA) — a development agency that functions under the state municipal affairs and urban development department — that had embarrassed the newly sworn in Trinamul government.

It was alleged that government funds to the tune of Rs 80 crore was misappropriated on the pretext of projects like electrical crematorium and sewerage treatment plants, which either were unfinished or not carried out. The scam led to a CID probe, which resulted in the arrest of an IAS officer who was the chief executive officer of the SJDA then.

“That scam had been a setback for Trinamul. At the 2015 civic elections, the Left and Congress made it an agenda. Trinamul lost and the Left came to power. This seems to be another reason why the chief minister rang an alert today (Tuesday),” said a political observer.

Deb, while talking to newspersons after the interaction with Mamata, said she has set a road map for the civic board and they will follow it.

“We will take up the tasks like improvement of traffic movement system in the city, better drinking water supply, along with other infrastructure works as per the road map,” he said.