Firhad Hakim flags off bus service from Siliguri to Kathmandu

According to the transport minister, the govt plans to introduce a similar bus service between Dhaka and Siliguri 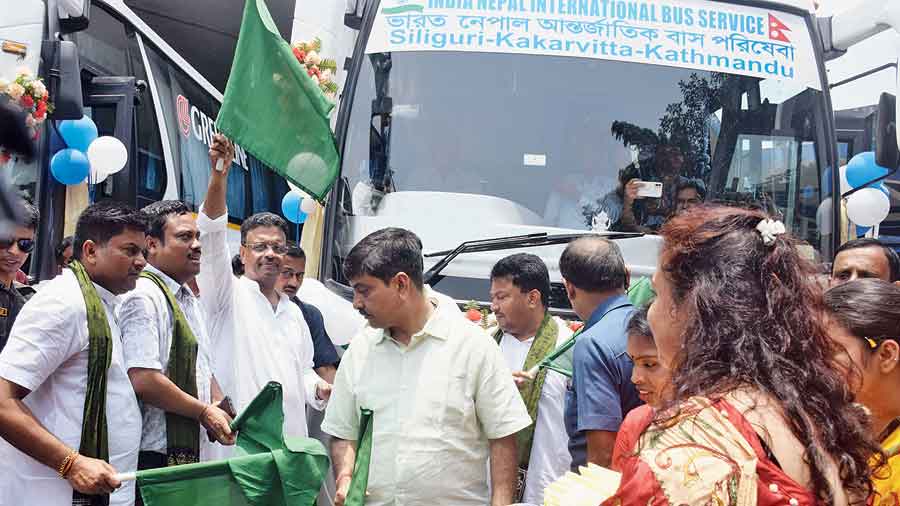 Minister Hakim flags off the bus from Siliguri on Wednesday.
Picture by Passang Yolmo
Bireswar Banerjee   |   Published 07.07.22, 01:39 AM

Bengal transport minister Firhad Hakim on Wednesday flagged off a bus service between Siliguri and Nepal capital Kathmandu, which would be operated by the North Bengal State Transport Corporation (NBSTC) in association with two private players.

“We have introduced a bus service between Siliguri and Kathmandu and hope it will boost bilateral relations between India and Nepal and give a fillip to tourism in the region,” Hakim said while flagging off the service at the Tenzing Norgay Central Bus Terminus here.

On the inaugural trip, the bus left Siliguri for Kathmandu with 22 passengers.

The service, sources said, will be available on every Monday, Wednesday and Friday. The bus will leave Siliguri at 3pm and reach Kathmandu at 9am the following day, covering a distance of around 631km. One has to pay Rs 1,500 for the Siliguri-Kathmandu trip.

“Greenline, a transport company based in India, is providing the buses for this service. Also, the Samyukta Yatayat Private Limited, a similar private company of Nepal, will provide the buses so that the service can run regularly. They have signed an agreement with the NBSTC,” said a source.

The transport company of Nepal has been running a service between Kathmandu and Siliguri since 2019 but this time, it joined hands with a government-run corporation.

“We run around 500 buses in Nepal and on routes like Kathmandu-Delhi, Kathmandu-Varanasi and Kathmandu-Bodh Gaya,” said a representative of the company.

Minister Hakim said the government planned to introduce a similar bus service between Dhaka and Siliguri. “We want to have bus services from our state to all neighbouring countries. Our next plan is to start bus services between Siliguri and Dhaka.