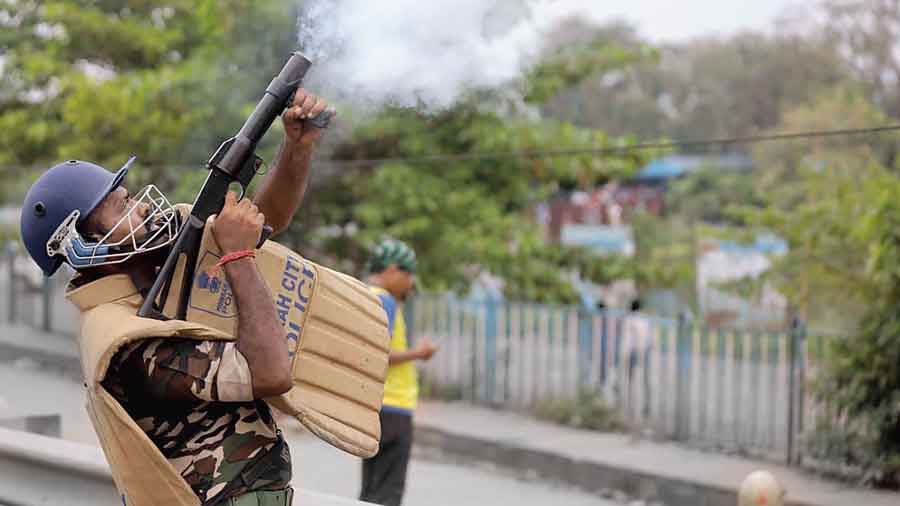 BJP’s Nabanna Abhiyan on Tuesday descended into violence in parts of Calcutta and Howrah as hundreds of party workers clashed with cops, set fire to a police vehicle and pelted stones in a protest movement that had been billed to seek the arrest of allegedly corrupt Trinamul leaders and ministers.

Santragachi, one of the three points from where BJP supporters began their march towards Nabanna, saw the worst violence as party workers pelted cops with stones after they law enforcers used water cannons and tear gas to disperse the mob. The police also caned the crowd and threw back stones.

A police source said BJP workers used catapults to hurl stones they had collected from railway tracks and ransacked a security kiosk on a road to Santragachi railway station.

On Rabindra Sarani, the police stopped another rally of the BJP headed by its former state president Dilip Ghosh. A few protesters set fire to a vacant police vehicle.

Some BJP leaders said the incidents of violence had tarnished the image of the party.

Some BJP leaders said the leadership left the field early and supporters were rudderless as police attacked them “brutally”.

A source said that in the absence of Suvendu Adhikari, who was taken to Lalbazar by police, the march from Santragachi was led by Bishnupur MP Saumitra Khan who “disappeared within a few minutes of the police crackdown”.

BJP leaders accused cops of  attacking party workers, including councillor Meena Devi Purohit who had to be treated at a hospital.

The BJP also shared a picture of former Rajya Sabha member Swapan Dasgupta on a bench, one side of his body caked in mud.

“The police charged at us mercilessly. They fired tear gas shells and threw water at electric poles from cannons. Anyone could have been electrocuted,” said state party chief Sukanta Majumdar, slamming state “brutality” towards a democratic movement.

Questioning the “democratic show”, Trinamul alleged that the BJP hired goons from outside Bengal to unleash violence.

Police refuted charges of brutality. A senior cop said an ASI was chased and beaten up by BJP supporters in Calcutta. Officers said at least 20 cops had been injured in attacks.

Amit Malaviya, the BJP’s co-in charge on Tuesday tried to blame Trinamul for the violence.

“Mamata Banerjee sent TMC cadres to pelt stones at the police so that later BJP could be blamed for it…” Malaviya tweeted hinting that the police car was set ablaze by Trinamul workers.

Trinamul leaders, however, said the tweet reflected BJP’s embarrassment at the violence.

“Everyone saw who pelted stones or set fire to a police vehicle. The act reminded us of militants in Kashmir pelting stones at security forces,” a Trinamul leader said.

Several state BJP leaders took out a rally from party headquarters to Lalbazar after Adhikari and other leaders were arrested. When the police tried to disperse the crowd a clash broke out in front of the Calcutta police headquarters. Several BJP supporters threw stones at the law enforcers, who in turn retaliated with lathicharge.

The petition was filed in the division bench of Chief Justice Prakash Shrivastava and Justice Rajarshi Bharadwaj. The bench asked the state authorities to ensure protection to BJP party office, prohibited unnecessary arrests or detentions and asked the secretary of the home department to submit a report in respect to the alleged incident to the court by September 19.