When Sourabh Datta Gupta made his World Cup gallery debut in Brazil in 2014, he faced two questions repeatedly: "Which country are you from? Why doesn't India ever play in the World Cup?" 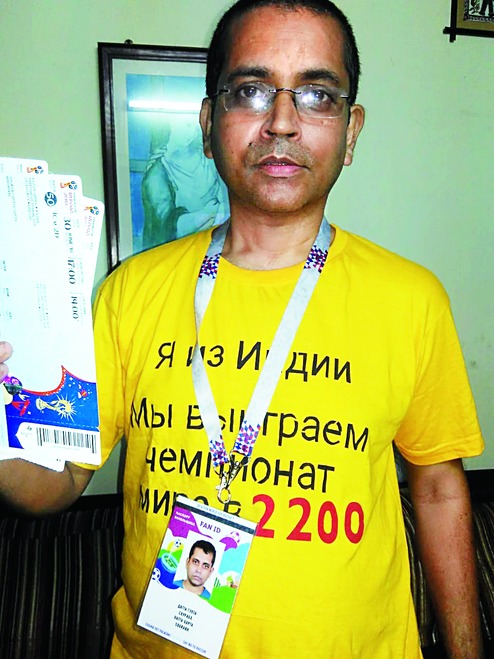 Calcutta: When Sourabh Datta Gupta made his World Cup gallery debut in Brazil in 2014, he faced two questions repeatedly: "Which country are you from? Why doesn't India ever play in the World Cup?"

So he is taking a T-shirt along to Russia. The yellow T-shirt, bought at the Maidan market, carries a message printed in Cyrillic, the script used by Russians. Translated, it says, "I am Indian. India will win the World Cup in 2200".

Saurabh, a 47-year-old government employee, had sent his message to one of his Russian hosts, Andrey Mochalov, to translate in Russian. "He also sent me a voice message to teach me the pronunciation."

This is not the first time Saurabh is taking a T-shirt with a message to the World Cup. In Brazil, his shirt read: " Pobre Indiano. Nao me roube. (Poor Indian. Do not rob me") to appeal to the better sense of muggers who, he had heard, target tourists.

Saurabh will be staying with Russians through his 17- day trip. He had appealed for free stay on an online forum of global cultural exchange. "I have been hosting foreigners for free at my Gariahat home since 2009. Brazil 2014 was the first time I sought the favour. Staying with people of a country offers an insight into the country's culture," he says.

All the matches he has tickets for will be played in the Volga region. "My first match - England vs Panama - is at Nizhny Novgorod, four hours by high-speed train from Moscow, on June 24, and the second - Portugal vs France - at Saransk on June 25.

"Saransk is such a little-known place that even WikiTravel has barely a few lines on it. I will leave my luggage at the left luggage section in the station for the length of match and leave immediately afterwards," he says.

He gets to spend a few days in Moscow for his third match - France vs Denmark. "My doctor host, Roman Xoroshij, is sending me scenes of Cup madness on WhatAapp."

Kazan, his fourth stop, is the "Istanbul of Russia". "It is the land of the Tatars, the descendants of Ghenghis Khan."

He is then travelling to St Petersburg. "Olga Bormotova, my hostess there, is an architect. I had offered to bring her handicraft, music and films as gifts but she has forbidden me to bring any films. She says she has watched everything from Disco Dancer to Devdas and is a Shah Rukh Khan fan."

The "worshipper of jogo bonito (beautiful game)" is happy that Argentina drew with Iceland. "If they are group runner-up, I get to see Messi in my round of 16 match."

But with Brazil too failing to get the better of Switzerland, he is leaving on Thursday with a grim face. "I had seen the nation mourn after the 1-7 drubbing in 2014. I wish them better luck this time."