Those arrested have been identified as Anarul Haque, Anarul Haji and Ansarul Sheikh of Harishchandrapur 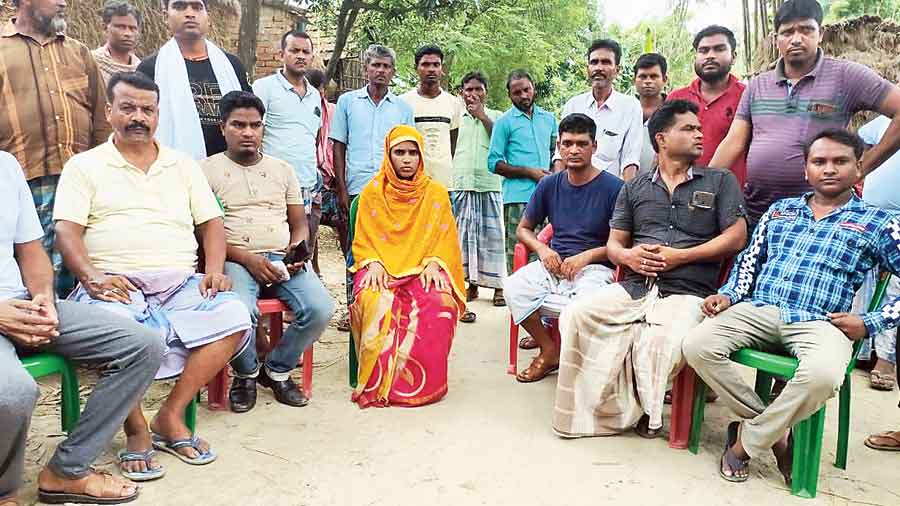 Some of the rescued Trinamul members of Daulatnagar panchayat at Harishchandrapur in Malda on Wednesday.
Soumya De Sarkar
Soumya De Sarkar   |   Malda   |   Published 29.07.21, 01:57 AM

Police rescued all 11 abducted Trinamul members of Daulatnagar panchayat under Harishchandrapur-II block of the district — two late on Tuesday night from the area and nine early on Wednesday from near the Bihar interstate border.

The nine were being taken in vehicles towards neighbouring Bihar. “Our officers could intercept them near the interstate border,” a senior police officer said. “All panchayat members have been rescued. Three persons (with the members in vehicles) have been arrested and a probe is on,” he added, but was tight-lipped when asked if weapons were found on the three.

On Tuesday, 11 members were allegedly abducted by a group of people, including the Trinamul pradhan of the panchayat Najibur Rahman and another Trinamul leader, Ashraful Haque, who is the husband of the sabhapati (chief) of Harishchandrapur-II panchayat samiti. One more member could escape.

“We were on way to the BDO office for the verification of our signatures that we had put on an application to seek the removal of the pradhan (Najibur) through a no-confidence motion. We did not know we’d have to face such consequences,” said Abdul Gaffar, one of the rescued members.

After the incident, Trinamul supporters had resorted to protests, demanding the police rescue the abducted members and arrest the culprits.

Later in the day, BDO Bijay Giri filed a complaint with the police. Police on Tuesday late night spotted two members, who fled from the captors, from a locality in Harishchandrapur.

Police teams checked vehicles in the area. Early on Wednesday, the remaining nine were found.

Those arrested have been identified as Anarul Haque, Anarul Haji and Ansarul Sheikh of Harishchandrapur.

Najibur, the pradhan accused of orchestrating the abduction, has gone into hiding.

However, co-accused Ashraful spoke to newspersons over phone on Wednesday and dismissed the abduction charges as baseless. “It is nothing but an attempt by some local leaders to malign my image,” he said.

The arrests, Trinamul insiders said, would help them control the perception damage in Malda after the loss of face owing to the abduction.

“It is good that the police have rescued all the members and arrested some persons. Trinamul will not intervene in the probe in any manner,” said a district Trinamul leader.

“Trinamul leaders have taken the strategy of saving those who had planned the abduction. They are highlighting the arrests of those who, we believe, were only carrying out orders,” said Sudipta Chatterjee, a state committee member of Malda BJP.