EC has lost all credibility: Mamata

My sweet democracy is crying for justice, the TMC chief said 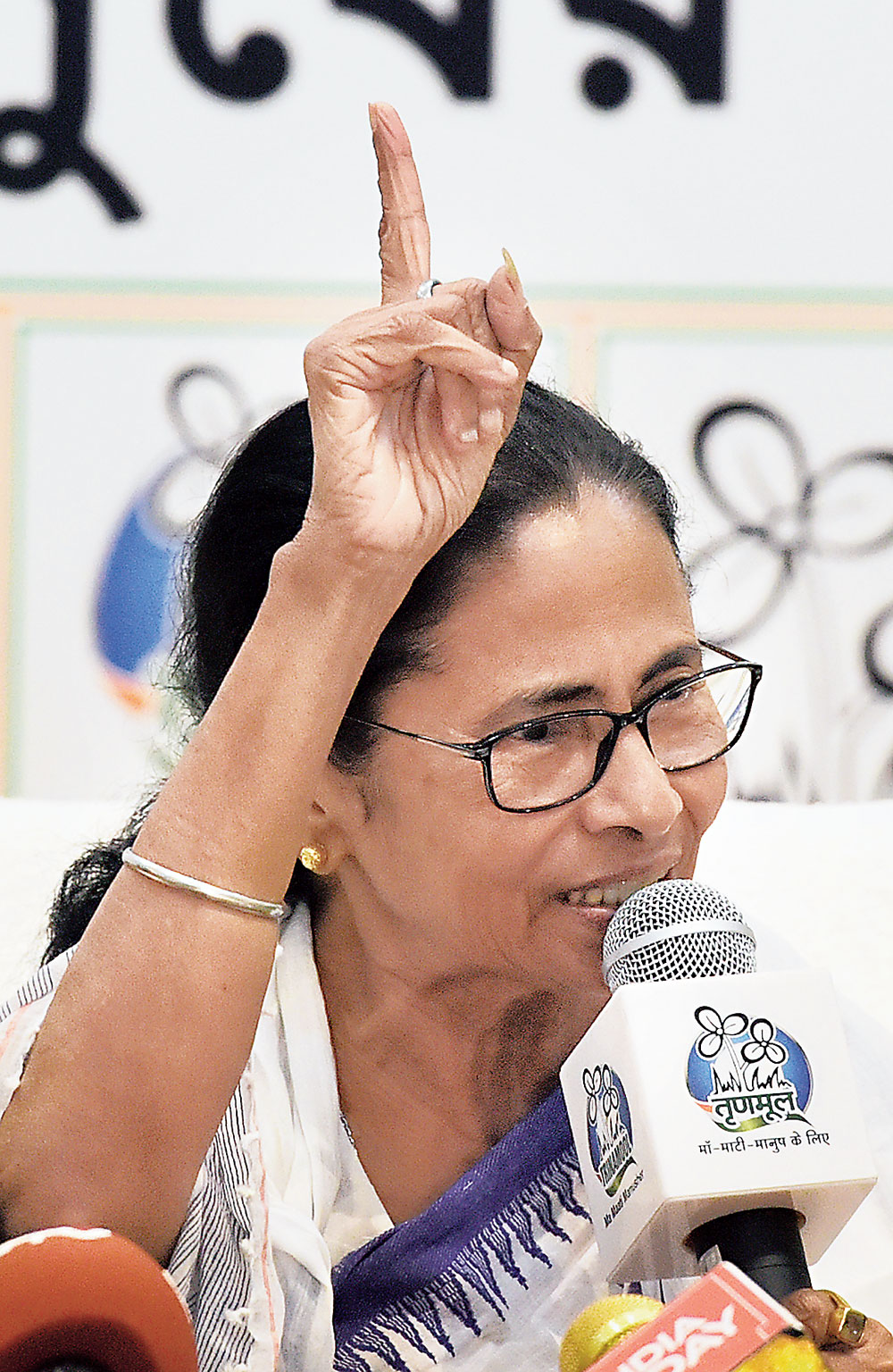 Chief minister Mamata Banerjee on Wednesday said the Election Commission of India had lost its “credibility” and urged all political parties, including the allies of the BJP, to register a protest against the poll panel for cutting short the campaign time.

The Trinamul Congress chief’s call is likely to find resonance across India at a time the EC’s credibility has been called into question like never before. The panel has taken no action on multiple complaints of poll code violation against Prime Minister Narendra Modi and BJP chief Amit Shah.

“I know, it’s a constitutional body, but I am sorry to say that it has lost all credibility…. My sweet democracy is crying for justice,” Mamata said at a hurriedly convened news conference on Wednesday evening.

According to her, the EC has turned a blind eye to poll process vitiations in places like Gujarat and Haryana, where the BJP is in power. From drawing up the election schedule to deciding on the quantum of central force deployment, everything was done by the EC at the behest of the BJP, Mamata alleged.

The media conference at Mamata’s Harish Chatterjee Street home — none could recall an earlier instance of the leader starting such a session as late as 9pm — followed the EC’s decision to cut short campaigning for the last round of voting in Bengal by 20 hours, removing home secretary Atri Bhattacharyya and sending CID additional director-general Rajeev Kumar on central deputation.

The decisions were linked to the prevalence of “fear psychosis” in Bengal, the poll panel observed.

“This is an emergency situation because of the Election Commission’s decisions…. But these are not EC decisions, these are Modi-Shah’s decisions,” Mamata said.

“I am countering Modi and that’s why he is scared of me and scared of the people of Bengal…. Whatever the BJP and Modi-Shah are saying, the EC is doing,” she added.

The EC has received unprecedented criticism this poll season. So intense has been the debate over the role of the poll panel that leaders of several political parties have said the time may have come to change the process of appointment of the three election commissioners. They have sought a role for the Opposition in the selection process, as opposed to the prevalent system in which the party in power calls the shots.

“The EC is obstructing everybody except Modi…. The Supreme Court is not listening to our pleas. Where will we go?” Mamata asked, referring to the election-time immunity the EC enjoys. The apex court entertains cases against the panel only after the election process is over.

“Three nominated persons cannot be allowed to do whatever they want…. I urge all the parties to protest,” Mamata added.

With this call, the Bengal chief minister, who floated a United India platform of Opposition parties on January 19, tried to unite all non-BJP parties before the general election results are declared on May 23.

If forging an Opposition unity was the primary agenda, Mamata tried to turn the administrative decisions of the poll panel into her advantage by linking them with Tuesday’s chaos and vandalism during Shah roadshow in Calcutta.

A bust of Ishwarchandra Vidyasagar was vandalised during the clash.

“The poll panel gave a prize to Modi and Shah after the vandalism of Vidyasagar’s bust. The people of the state will protest against the BJP and the EC by wearing black and bringing out candle rallies,” she said.

Mamata questioned the poll panel’s assessment of the ground situation in Bengal. “The PM and Amit Shah held so many rallies here… nothing happened. There was chaos at yesterday’s roadshow because Amit Shah came with the objective of (instigating a) danga (riot),” she said.

According to the Trinamul chief, the BJP got people from Bihar, Uttar Pradesh and other states to the roadshow and these “outsiders” were behind Tuesday’s unrest, which she described as an assault on the cultural heritage of Bengal.

“Instead of taking any action against Shah and his men, the poll panel is taking all such decisions,” Mamata said.

Referring to the EC’s decision to narrow the campaign window, she asked why the panel did not stop the process on Wednesday evening itself if the situation was so bad.

“Is it because the Prime Minister has two rallies tomorrow? The BJP may think that they will gain by forcing the EC to take such actions…. But Bengal has been insulted and the people of Bengal will give Modi a befitting reply,” Mamata said.

Besides supporting the two officers who were relieved of their charge in Bengal, Mamata said the EC’s decision would hardly have any impact on her plans.

“I will have to tweak my plans a bit,” she said.